Rosado looks to stay unbeaten in New Jersey vs. Quillin 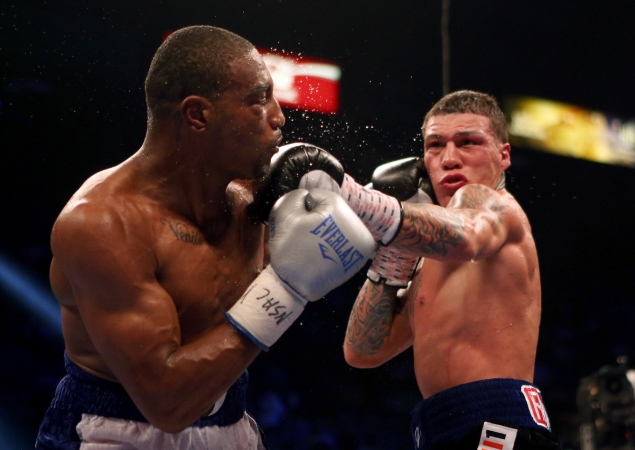 While Philadelphia’s Gabriel Rosado claims that he never has lost in the state of New Jersey, WBO middleweight tiitleholder Peter “Kid Chocolate” Quillin has never lost as a professional.

One of their streaks will end on Oct. 26 when they clash at Boardwalk Hall in Atlantic City, N.J., on the undercard of an IBF light heavyweight title defense by Bernard Hopkins (53-6-2, 32 knockouts) against Karo Murat (25-1-1, 15 KOs) as part of a Showtime tripleheader.

Rosado is coming off of a fight with J’Leon Love in May, a split-decision loss that became a no-decision after Love was fined $10,000 and suspended for six months by the Nevada State Athletic Commission for his failed post-fight drug examination.

“I’ve never lost in New Jersey and I don’t plan on starting now,” said Rosado, 27, who is 6-0 with three knockouts in New Jersey. “I’ve chased a world title for a long time and while I respect Quillin for giving me this new opportunity, I’m going to have to take that belt and bring it back home to Philly.”

In his past two performances at Barclays Center in Brooklyn, Quillin dropped Hassan N’Dam six times on his way to a unanimous decision for the WBO belt last October and he scored four more knockdowns during a seventh-round stoppage of Fernando Guerrero in his first defense of that title in April.

In June of last year, Quillin, 30, dropped former titleholder Winky Wright in the fifth round of an eventual unanimous decision victory.

“It’s great to be on the East Coast and back on Showtime for my second world title defense,” said Quillin, who has a combined 11 knockdowns over his past three bouts. “Rosado is a quality challenger who always comes to fight, and because of our competitive styles, the fans are going to get a great show on October 26.”

“Wilder hits hard, there’s no question about that,” said Firtha of Wilder, a 2008 Olympic bronze medalist. “But we’ve never seen what happens when he gets hit back. I’m going to hit him on Oct. 26 and I plan on taking his ‘0’ away.”

Firtha was last in the ring for a six-round unanimous decision victory over Robert Hawkins in July that ended his two fight losing streak and a run of three losses in his previous four fights.

Firtha has been stopped four times, including by Tye Fields in the sixth round in 2009, and by Tyson Fury in the fifth round in 2011. Firtha has also gone the distance in 10-round losses to Alexander Povetkin and Johnathon Banks in 2010 and 2012, respectively.

“Nicolai Firtha is a veteran who has gone the distance with a lot of tough fighters,” said Wilder, 27. “But I’m more confident and more ready than ever, so I’m expecting another knockout win. I want to make a statement with this fight.”

Hopkins defeated Tarvoris Cloud to win the title in April, extending the 48-year-old’s own record as the oldest man to win a significant crown. The Philadelphian originally set the mark by outpointing Jean Pascal to win the WBC light heavyweight belt at 46 in May of last year.

A 30-year-old resident of Kitzingen, Germany, Murat is 3-0-1 with two knockouts since being stopped in the 10th round in September of 2010 by former WBO 175-pound beltholder Nathan Cleverly.

“We’ve returned to the East Coast with not just another history-making title defense by Bernard Hopkins against a hungry challenger in Karo Murat, but we have a guaranteed action with the undercard,” said Richard Schaefer, CEO of Golden Boy Promotions.

“The co-main event is between the top American middleweight in the world, Peter Quillin, and the always tough Gabriel Rosado, as well as one of the most exciting young heavyweights out there, Deontay Wilder, against someone coming to score the upset in Nicolai Firtha. It’s going to be a great night for boxing once again.”