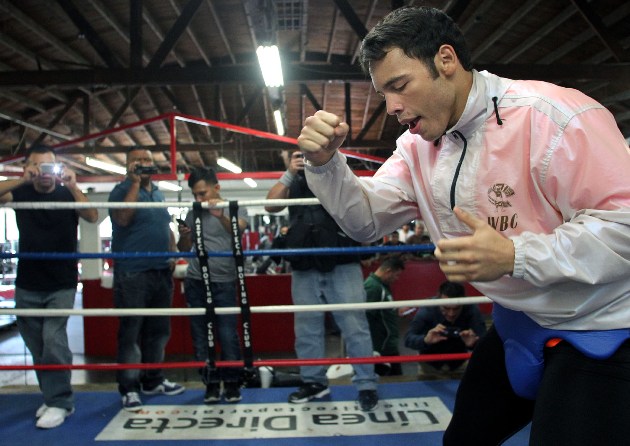 A big question for Bryan Vera heading into Saturday night’s clash with former WBC middleweight titleholder Julio Cesar Chavez Jr. will be whether or not the fight is worth the weight.

For during Tuesday’s conference call promoting their bout, there still was doubt concerning the ability of Chavez (46-1-1, 32 knockouts) to make the contracted super middleweight limit of 168 pounds, even as the 27-year-old Mexican son of the former world champion told reporters that he was within reach at 173.

To that end, Top Rank CEO Bob Arum said that he wold look to negotiate a deal on Wednesday morning with Artie Pelullo, the promoter of Vera (23-6, 14 KOs), potentially to raise the contracted to mark to somewhere above 168, and perhaps to 173.

Although Pelullo said that he would be willing to parley, he said that a new agreement would likely come at a substantial price.

“We will just have to work out a financial consideration that would be given to Bryan Vera because Chavez can’t make weight. We have a contract to deliver Bryan Vera at 168 pounds, and I will deliver him that, and Bryan’s already at 168 or 169 right now. The problem has occurred because Chavez Jr. is overweight, “said Pelullo.

“He said on that conference call today that he’s 173. I have a contract for Bryan Vera to weigh 168 pounds. Now if Chavez Jr. is 173, then there’s no problem, and he should be able to make weight. If he’s not too heavy, the fight’s going to happen. Depending on how much he weighs in at, and what he’s going to weigh the next day, that’s what it’s all about.”

By the time he enters the ring on Saturday night, Chavez Jr. will have been out of the ring for more than a year since being dethroned as titleholder by RING and WBC 160-pound champion Sergio Martinez on Sept. 15 of last year, after which he tested positive for marijuana.

In February, Chavez was suspended for nine months by the Nevada State Athletic Commission and fined $900,000, an amount which was reduced in June to $100,000.

Meanwhile, Vera, a 31-year-old who is trained by Ronnie Shields, has won six of his last seven bouts. Over a nine-month span, Vera had a four-fight winning streak, the past two by knockout.

Vera’s win over Lee was by seventh-round knockout — as was another by Chavez over Lee — and his loss to Lee, by unanimous decision.

RingTV.com sought the opinions of 18 boxing insiders as to their view of what will transpire in Chavez Jr.-Vera at The StubHub Center in Carson, Calif., on HBO.

He seems to respond to criticism. It’s hard to be definitive about that because of inconsistency often brought on by a lazy approach to training. Winning made him comfortable and careless.

But the guess here is that Chavez heard the critics, loud and clear, after a country-club camp before his loss to Sergio Martinez. He’s got a lot to prove. He’ll need more than one fight to do it. But he’ll get started on the task against Bryan Vera.

Julio Cesar Chavez Jr TKO 8 Bryan Vera: How serious is the Lion Cub of Culiac├ín about boxing and how will the move to super middleweight affect him in the ring? These are the questions that tough Texan Bryan Vera is being asked to answer on behalf of a curious, if not skeptical, boxing public hungry for answers.

Inactive for a year on the heels of an enigmatic performance against Sergio Martinez, will the real Julio Cesar Chavez Jr please stand up? Assuming that Chavez Jr is well trained and properly motivated to continue his career, this comeback fight should be a success for him and a return to form.

If he’s still getting high in his pink underwear and eating Fruit Loops while training in his living room, things could get interesting. Never in a bad bout, Vera is a grinder and he should test Chavez Jr.’s current credibility before succumbing to superior technique and firepower some time mid-to-late in the fight.

But I believe the move up to 168 pounds levels the playing field.Bryan Vera is on a nice winning streak, and the victories over Sergio Mora and Sergei Dzinziruk are eye-catching.

But I see the bullish Mexican having way too much strength for him. The referee is forced to jump in and save Vera from further punishment somewhere around the midway point.

Julio Cesar Chavez Jr. UD 12 Bryan Vera: Given the styles this should be a long, exciting, grueling war and if both men are right, Julio Cesar Chavez’s size and superior skills should carry the day. But if there are cracks in his preparation, Bryan Vera is a tough enough cookie to exploit them to the nth degree.

My guess is that Chavez will be properly prepared because he knows a second straight loss, especially to someone who supposedly has a tailor-made style, will irreparably damage his money-making potential.

Although he’s been impressive against Sergio Mora and Sergei Dzinziruk, fighting the heavy handed Chavez is a much taller order. As for Chavez, it almost isn’t fair how big he’s going to be when the two step into the ring.

Fighting someone who was taken to school by Andy Lee and has been stopped in the second round by the likes of Jaidon Cordington is pretty much a showcase fight for Chavez to get his career back on track with a brutal, one-sided thrashing.

I expect Vera to come out swinging, taste the power of Chavez and get pounded on for six rounds until the fight is mercifully called to a halt.

But Chavez simply will be too big and too strong for Vera once they get in the ring Saturday night. Vera is a very game guy, but Chavez’s chin is too good for Vera to hurt him and Vera basically is a middleweight fighting a light heavyweight.

Bryan Vera is tough, brave and a little bit foolhardy at times. He’ll be in there punching, but I don’t think he can hang with Junior.

I believe this bout will resemble the Chavez-John Duddy fight. Good action, both landing for four or five rounds, then Chavez taking over and gradually breaking down Vera.

Chavez is coming off his first career lost to Sergio Martinez 12 months ago. He has said that he learned from the defeat. Vera is on a four-fight winning streak.

A Chavez victory puts him in line to challenge Andre Ward next year. I see a close fight with Chavez doing just enough to win by decision.

Julio Cesar ChaveZ Jr. TKO Bryan Vera: As much as I’d like to see Bryan Vera outbox the bigger and lazier Julio Cesar Chavez Jr., I just can’t see it happening, particularly if Chavez is a heavyweight by fight night.

Chavez should be able to wear down Vera later in the fight with his size, securing a TKO somewhere in the last third of the bout.

Julio Cesar Chavez KO Bryan Vera: The weight issues around this fight, after his unprofessional effort leading to the Sergio Martinez fight, make it impossible not to want to see Bryan Vera put the spoiled scion on his rear.

It’s not the most likely outcome. Julio Cesar Chavez Jr. will come in at the weight he wants, and Vera will take the check he’s been denied through a long wait.

I think that one last round against Sergio Martinez has likely given him a huge mental boost. I think his size will be a factor in him scoring a strong decision in what will be a good action fight.

Bryan Vera W 12 Julio Cesar Chavez Jr.: I have Bryan Vera by decision. Vera isn’t likely to make anyone forget Floyd Mayweather, but he’s an honest, hardworking fighter who will push his opponent to the limit.

I think he’ll be too much for Julio Cesar Chavez Jr., who I presume isn’t as hungry as is Vera. I think Chavez’s size will keep him on his feet to the final bell, but I feel Vera will be a deserving victor.

Julio Cesasr Chavez TKO 9 Bryan Vera: Bryan Vera has pulled off a couple of upsets over the years mostly due to better-than -average power. Unfortunately for Vera, he is facing the fighter that I consider to have one of the best chins in boxing.

Julio Cesar Chavez Jr. has never been noticeably hurt, at least not on American television. That makes this fight almost a fight that can not be won by Vera, who is not going to out-box anyone.

I look for Chavez, who will probably come into the ring 8-to-10 pounds heavier than his opponent, to wear down Vera with a consistent body attack before hurting him upstairs in the later rounds.

I wouldn’t be surprised if Vera was able to survive and go the distance but the prediction here is Chavez by late stoppage.

Julio Cesar Chavez Jr. KO 6 Bryan Vera: This fight has been pushed back several times. The weight limit has crept up, but finally Junior is ready to return. It’s now made at 168. JCC Jr. is the bigger man.

Although it may take him a few rounds to get going and work off the ring rust, I expect Chavez to slowly but surely keep barreling forward pushing Bryan Vera back before beating Vera into submission or on cuts around the half way point.

By the one-sided margin of 17-1, the experts have Julio Cesar Chavez Jr. defeating the rugged Bryan Vera on Saturday night.