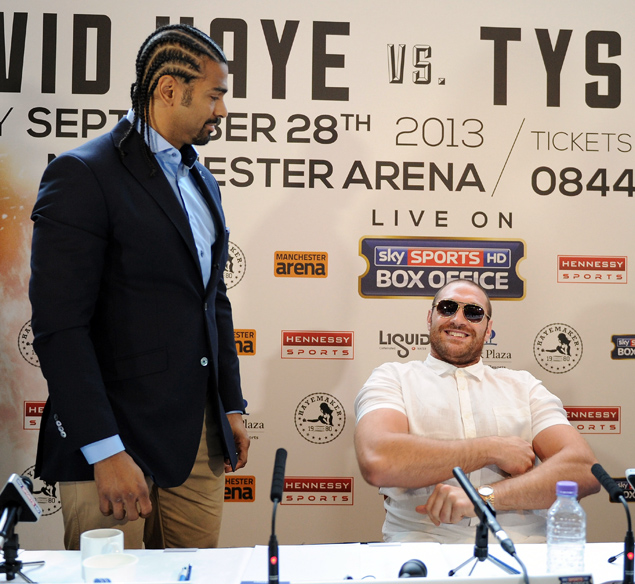 David Haye will now face unbeaten heavyweight contender Tyson Fury on February 8, 2014, at the Manchester Phones 4u Arena, England, following the recent postponement of their original showdown slated for this Saturday.

A cut above 32-year-old Haye’s left eye, sustained in sparring last Friday, forced him to withdraw at short notice – and sparked a flurry of criticism and innuendo, mostly from inside the camp of bitter rival Fury, that the ex-WBA holder had deliberately sidestepped the non-title bout.

Haye, however, hit back on Tuesday as he welcomed the speedy rescheduling of the anticipated grudge blockbuster, and then explained why he was involved in such serious training only eight days before being in due in the ring against Manchester-man Fury (21-0, 15 knockouts).

“News of the date in February is music to my ears,” said Haye, from south London. “I was absolutely devastated this weekend, and felt as though I’d let a lot of people down. But now, with this new date, I couldn’t be happier. My fans will still get the chance to see what they all wanted to see this weekend — they’ll get to see Tyson Fury sparked out in a spectacular fashion.

“Sparring eight days before a fight is nothing new or unusual. I’ve done this before fights in the past and never had an issue.”

To support that argument, ex-cruiserweight titleholder Haye (26-2, 21 KOs) pointed to past incidents when top fighters have suffered setbacks in training during the final countdown to a major fight.

“Look at the history books,” said THE RING’s No.2-rated heavyweight. “George Foreman sparred and got cut eight days before his ‘Rumble in the Jungle’ with Muhammad Ali – causing a six-week postponement. And Sugar Ray Leonard sparred and got knocked down five days before his fight with Marvin Hagler, but still managed to go on and win.

“Foreman and Leonard are two of the greatest fighters of all time, so if it was good enough for them, it’s certainly good enough for little old me. Not only that, those guys were preparing to face the likes of Ali and Hagler, while I was preparing to fight Tyson Fury, a man whose greatest triumph to date is shedding a few stone on Belgium’s Biggest Loser fat camp.

“These things sometimes happen in training, and to suggest I decided against wearing a head-guard, or that the cut was premeditated, shows a clear lack of knowledge and understanding. This camp was no different to any other, aside from the fact it ended on an unlucky and sour note.”

And Haye was not quite finished there. Further stoking the animosity between the pair, he warned 25-year-old Fury, sixth in the magazine’s heavyweight ratings, that hurling insults outside the ring will only make his battering inside it more painful.

“Tyson Fury might start to get brave now that he’s received a stay of execution and call me names and accuse me of ducking him but that will all be short-lived, I can promise you,” Haye said. “After hearing the nonsense he has come out with in the last few days, I’m even more determined to expose him in front of millions.

“Only the possibility of getting another chance to land punches on his massive head and doughy gut has helped cheer me up. The cut will heal, the fight will happen next year, and the fans will go home happy. The only difference now is that Tyson Fury gets an even nastier beat-down than he would have received first time round.

“Once again, I’d like to apologize to the fans for the inconvenience caused by the postponement, and also because they will now have to endure a few more months of rubbish spewing from the mouth of Tyson Fury. I had hoped to silence him for good on Saturday night.”

All tickets previously purchased for the original date of September 28 are automatically valid for this new date of February 8. Alternatively, fans looking for a refund are advised to go back to their point of purchase before October 31