Wilson’s hard road leads back to his hometown 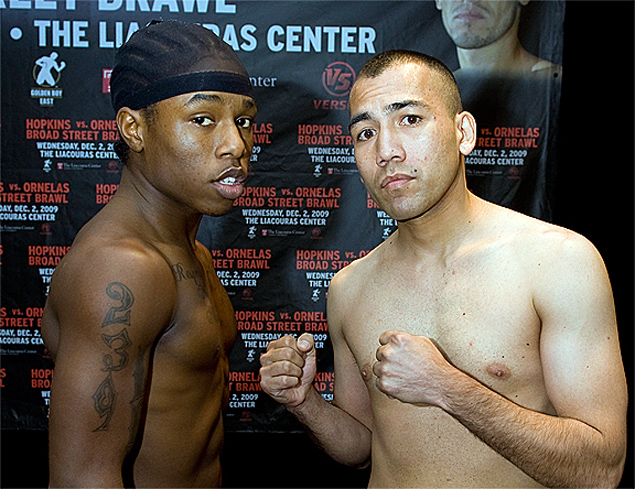 Derrick Wilson (left) poses with Guadalupe De Leon, who outpointed him in a six-round bout in December of 2009 in Philadelphia. Wilson says he wouldn’t have lost to De Leon had he known there were same-day weigh-ins in Pennsylvania

Derrick Wilson is a living, breathing, punching second chance of a boxer.

His journey as a professional has been a scenic one, to say the least. It began as a highly touted prospect who often fought on televised Golden Boy Promotions cards, but puzzling losses, managerial disputes and changes in trainers took him into an area no boxing GPS could navigate him out of.

Where exactly can a 10-4-2 featherweight with no promoter go? Where any desperate person in any walk of life goes to sort things out. Back home.

“Anybody that does anything from Fort Myers and is successful at it, that means they’re pretty good,” said Wilson of the Florida city where he was born and raised. “When you compare them to any other city, I don’t care if they rap, I don’t care if they sell dope. Whatever they’re doing in Fort Myers, if they can do it in Fort Myers, they can do it anywhere. Sometimes you have to go back to the drawing board, go back to the basics. I had to come back where I was created. I came back to Fort Myers and I got my mind right, because I’m motivated to get away from here again.”

It’s an interesting dichotomy that plays itself out in boxing so often. The desire to leave unsavory circumstances is so potent that a fighter will put himself in them hoping for the fuel to thrive. Wilson did the opposite for much of his career, heading to other parts of Florida to train with notable cornermen such as John David Jackson, and, most recently, Tony Morgan.

Prior to his upset win over Braulio Santos this past June on Golden Boy Live!, Wilson linked up with his childhood coach, Larry Wills.

As opposed to a gym packed with world champions, where Wilson was an afterthought, he was the main focus in his hometown again. The only people he had to compete with for Wills’ attention were his two sons.

“Not to say that Tony Morgan isn’t a good coach, because he coached me real well in previous fights. But there was something going on in that camp in Winter Haven,” said Wilson. “The difference was Coach Larry put a lot of work in with me, because he doesn’t wanna go up there and look bad himself. We come from the same city, and we’re real hungry down here in Fort Myers, trying to get away from here. He took a lot of time out to get me right.”

“Distractions in camp” are low on the scale of horror stories Wilson has about managerial difficulties in his short career.

There was the time in 2009, when he showed up to fight journeyman Guadalupe De Leon in Philadelphia, unaware of Pennsylvania’s same-day weigh-in policy at the time. That resulted in his first professional loss, and a gradual falling out with Golden Boy.

“You wanna know what they should have done? They should have thrown me right back in there with De Leon, instead of putting Charles Huerta in there with him, and then making it seem like what happened between me and Charles was a fluke [Editor’s note: Wilson stopped Huerta in the first round just prior to facing De Leon]. I was real mad at Golden Boy for doing that. It made it feel like they weren’t looking out for my best interests in the first place, they were looking out for Charles Huerta’s. They just started throwing me to the wolves,” said Wilson.

Then, there was the time in 2011 when he arrived in Connecticut to face Javier Fortuna without knowing his opponent was a southpaw. That resulted in his first stoppage loss as a pro, an 8th round TKO.

“I was training with Tony Morgan, and instead of him using the money my managers sent him for sparring, he said we’ll just save money by using guys that are local from the gym and sparring them for free. At the same time, it was my fault for not looking and seeing that he was a southpaw. But I trusted the people I was around at the time,” said Wilson, who wouldn’t comment on whether any of the money saved went to him.

As a direct result of the Santos conquest, though, Wilson has the opportunity to erase a whole lot of outside factors moving forward. The 24-year-old will be taking on Robinson Castellanos for the WBC Silver trinket on a Fox Deportes televised event in Mexico.

Though the existence of a “Silver” title enrages plenty of boxing folks, and for good reason, it is a valuable resource for fighters like Wilson in one sense. Winning it would give him a cushy spot in the WBC rankings, and give him some leverage in negotiating bigger fightsÔÇöeven a world title fightÔÇöthat would otherwise be unfathomable.

“This is the best thing possible that could have happened to me, this title shot. I have no room for error,” Wilson admitted.

Castellanos will present the toughest in-ring test of his career. The 31-year old Mexican has won the Silver strap twice and defended it six times. In his latest outing, he upset Celestino Caballero in his native Panama, nabbing a split decision victory.

“He’s not on my level. I don’t think he can do anything with my talent,” said Wilson. “But I’m sure they looked at me the same way, that I’ve got four losses and I’ve been stopped twice. He probably thinks he’s in for a cake walk, but he’s in for a real treat. I’m gonna make the fight so one-sided that there won’t be any way to rob me.”

If his bravado comes to fruition, mark it down as the first time anything has been easy and simple for Derrick Wilson.