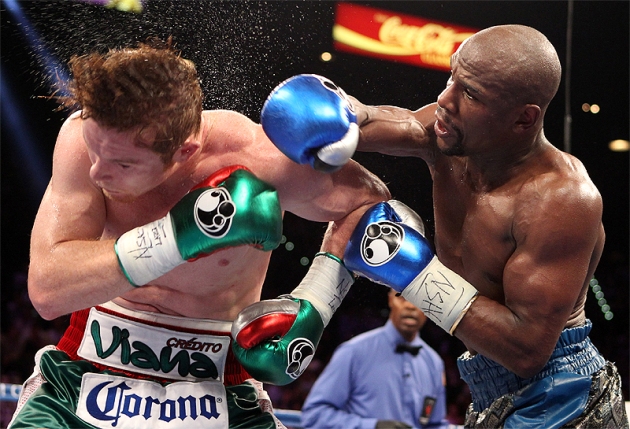 As predicted by Golden Boy CEO Richard Schaefer, Saturday’s unanimous decision by Floyd Mayweather Jr. over Canelo Alvarez on Showtime Pay Per View has become the highest-grossing boxing event of all time with nearly $150 million in revenue reported, eclipsing the $136 million earned by Mayweather’s 2007 victory over Oscar De La Hoya.

“But I think that what Canelo has done is that he has elevated the event with the massive following that he brings to the table. So I’m very happy not only for the fighters, who are obviously making a substantial amount of money, but I’m very happy for the sport of boxing as well. What this shows is that the sport of boxing is doing extremely well.”

Although Mayweather pocketed a record $41.5 million guaranteed purse compared to Alvarez’s $5 million, Schaefer had estimated that Mayweather stood to pocket “$70 or $80 million” with the new grossing record, and Alvarez, “well over $10 million.”

Mayweather-Alvarez also eclipsed the record gate with $20,003,150, according to the Nevada State Athletic Commission, surpassing the $18,419,200 by Mayweather’s split-decision win over De La Hoya.

“It really has been a big year. We’ve made a lot of progress this year. A lot of progress. It’s not that big of a surprise, however, quite honestly, when you look back at the platforms that we had available to us,” said Stephen Espinoza, Showtime’s executive vce president and general manager of sports.

“When we promote before audiences of 10-to-15 million at one time during some of the biggest sporting events of the year, we’re going to get mainstream and casual fans. That’s how you get to these gargantuan numbers that we were able to achieve.”

Also on Thursday, it was announced that Mayweather-Alvarez sold 26,163 closed circuit tickets at $100.00 each at locations in Las Vegas for a total of more than $2.6 million, according to official records provided by NSAC executive director Keith Kizer.

“When all parties are working together, you’re talking about record-breaking results,” said Ellerbe. “With Mayweather Promotions working with Golden Boy Promotions, along with CBS and Showtime, these are the kinds of results that you get.”

Schaefer estimates that Mayweather-Alvarez is approaching the record mark of 2.5 million set by Mayweather-De La Hoya, having already gone beyond two million.

On May 9 of 2007, four days after Mayweather-De La Hoya, the amount of pay-per-view buys was reported at reported as just over 2.1 million, a number which later grew to 2.5 million, according to Schaefer, who said “We are ahead of those reports.”

“Back in 2007, when we first initially announced, the first number was 2.15,” said Ellerbe. “Obviously, we’ve surpassed the gross record, so, like I said, Floyd very well could make $100 million.”

With the numbers as they are, could there be a return bout?

“Could I see, maybe two, three fights down the road, when Canelo is 24 or 25, and Mayweather is pushing 38, a rematch between those two? Could I see a fight like that?” said Schaefer.

“Absolutely. Mayweather dominates everybody, but I’m telling you, Canelo has learned from this fight, and he will be back as world champion, probably in his next fight. Canelo is the future.”