The passing of former heavyweight champion of the world Ken Norton has struck the heart of boxing. The Jacksonville, Ill., native succumbed to heart failure at the age of 70 on Wednesday after a long illness, and many former champions have expressed their condolences.

Norton, like Joe Frazier, will forever be linked to Muhammad Ali, but another man who created heavyweight gold with the Adonis-like gladiator was the legendary “Easton Assassin,” Larry Holmes, who was kind enough to speak to RingTV.com about his former adversary.

“I just wasn’t expecting this,” said Holmes with a hint of emotion. “As a matter of fact I was watching footage of Ken Norton a couple of hours before I found out he had passed away. I just couldn’t believe it and it came as a real shock.”

Holmes took the WBC heavyweight title from Norton via split decision in an epic 15-round encounter at the Caesars Palace Sports Pavilion on June 9, 1978. The buildup was hostile and the action was second to none, but Holmes speaks with nothing but respect for his former opponent.

“I met Kenny in 1975 and we never had anything against one another,” said the former champion. “When we signed the contract to fight we didn’t like each other but he was a good guy who always treated people with respect.

“I was so happy that Kenny gave me the shot. It was the most brutal fight I ever had because this guy wanted to keep his title and fought like a champion. No fight I had afterwards came close to how tough that one was.” 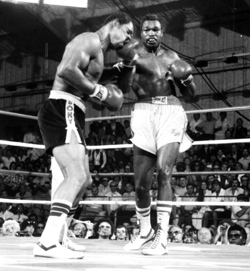 Holmes built up a solid lead on Norton, mixing a sharp jab with accurate combinations and steady lateral movement. Still, as the fight progressed, Norton began landing heavily and closed the gap with torrid assaults to head and body.

The 15th round decided the fight in Holmes’ favor, and is fondly remembered by fans as perhaps the finest closing round in heavyweight championship history.

“Back in those days boxing was boxing, with Muhammad Ali, Joe Frazier, Ken Norton, George Foreman, Larry Holmes and Jerry Quarry. Today you have a lot of guys who make noise, whereas back then we had a lot of guys who could fight.”

Norton is considered Muhammad Ali’s ultimate boogeyman and there are many critics who feel he should have won a clean sweep in their epic trilogy. The official record will show that Ali won fights two and three, after sustaining a broken jaw and a split decision loss in their first encounter.

“Ali was a guy that people loved and therefore it was hard to beat him,” said Holmes. “When you were in against Ali you had to win convincingly to get the decision and that is what Ken Norton did (in fight one).”

Over the years Norton and Holmes shared the mutual respect which comes when two gladiators compete for all the marbles in a championship fight, and their Las Vegas showdown will never be forgotten by anyone who witnessed it.

“Kenny always said my problem was that I was so much better than everyone else around. He always gave me that compliment and I really appreciated it. I will never forget him for saying that.

“I’ll continue to watch his fights and speak about him. I’ll always tell people that he was a great man and a great fighter and I won’t be lying. People say he was underrated but Ken Norton completed the circle.

“Ali, Frazier, Foreman and myself – Kenny was part of that mix and he belonged there.”

Photo / THE RING
Tom Gray is a member of the British Boxing Writers’ Association and has contributed to various publications. Follow him on Twitter: @Tom_Gray_Boxing