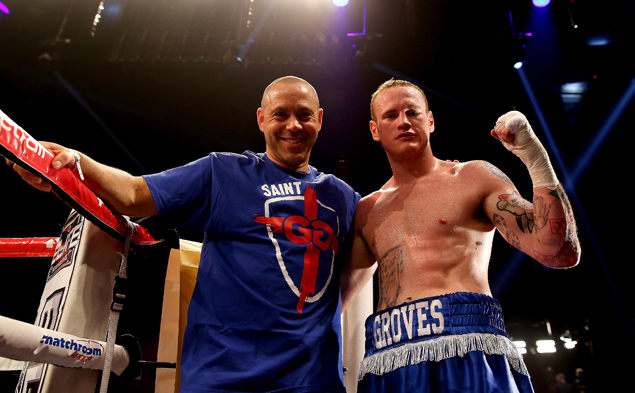 Rumors that the pair were no longer working together suddenly surfaced on Tuesday following a media conference to promote the Froch-Groves showdown at the Manchester Arena, England, on Nov. 23.

They have now been confirmed by Booth, according to an article posted on the Daily Mail website Wednesday evening.

“We don’t work together anymore, and that’s all I want to say. It’s categorically not anything to do with money,” Booth, who also trains English heavyweight star David Haye, reportedly said in response to claims that a financial dispute is behind the break-up.

Certainly, it seems extraordinary that Groves, THE RING’s No. 5-rated super middleweight, would sever ties with his trusted trainer quite so close to the biggest date in his unbeaten rise up the elite ladder.

As of yet the 25-year-old from west London, who had been a major part of “The Hayemaker” camp since 2008, has declined to comment on the matter. However, it may have something to do with the fact Haye faces Tyson Fury in Manchester later this month and Groves feels Booth has been unable to give him sufficient attention ahead of his title crack at Froch.

Whatever the truth, the unexpected twist will only add to the already-immense interest in the all-British grudge clash, which is being shown pay-per-view in the UK on Sky Box Office. An amazing 18,000 tickets were snapped up in 11 minutes when they went on sale earlier in the week.

“I’m thrilled to be part of this massive night. It’s a true honor to fight for a world title and to take on a well-established champion like Carl Froch,” said Groves (19-0, 15 knockouts) before the news surrounding Booth had emerged. “I’m not surprised that the fight has sold this fast as British boxing is on a high and this is one of the biggest fights we’re going to see in the next few years.