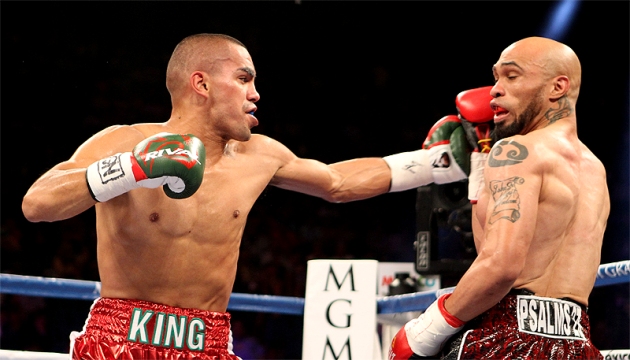 For a man whose career has been characterized by disputed decision losses and setbacks, one of which was a controversial disqualification, Molina, 30, received what might best be described as a gift.

“And when they said, ‘and the new,’ that’s when I felt that I could relax and everything, because of the hard road that I had to take to get here. But it was all worth it.”

Molina had an unbeaten streak of 11-0-1 with two stoppages heading into his fight with James Kirkland in March of last year, a run that included a disputed draw with then-unbeaten Erislandy Lara in March of 2011 and a unanimous decision over former welterweight beltholder Kermit Cintron in July of 2011.

Against Kirkland, Molina was ahead on two judges’ cards when, in the 10th round of the 12-round title eliminator, a member of his corner stepped into the ring before the bell. Molina was disqualified as a result.

“We’ve gotten the short end of the stick a couple of times, and I thought that it might happen again,” said Molina’s manager, Luis DeCubas Sr. “So I was happy that we became world champions. He’s fought everybody that we’ve put in front of him in everybody’s home town. I’m just glad that he’s a champion. Carlos deserves it.”

In his previous bout in February, Molina had scored a resounding unanimous decision over Cory Spinks, flooring the former welterweight champ in the 11th round and nearly stopping him in the 12th.

“Who’s next? I want Mayweather. I want all of the belts. I’m happy with this belt right now,” said Molina. “But I want the all four belts. Whatever I have to do to get that fight, I’ll be willing to earn it. Miguel Cotto, Canelo. Whoever.”

“I would love to have the fight in Carlos’ home town of Chicago, where there are a million Mexicans,” said DeCubas Sr. “I think it’s a natural, Canelo and Carlos Molina in Chicago. That would be Carlos’ dream to fight in his home town.”

While Mayweather said he would like to see Alvarez bounce back against Molina, Golden Boy CEO Richard Schaefer dismissed Molina’s drawing power.

“Molina? I mean, I have to tell you, I can see a lot of better matchups than Molina for Canelo. I mean, I don’t want to take anything away from Molina. He’s a world champion and he worked hard, and so on. But I’m talking as a fan. As a fan, I would, for example, rather see a Cotto fight for Canelo,” said Schaefer.

“Or I would rather see Canelo against [Alfredo] Angulo or, for that matter, even Canelo against Lara or any of those matchups other than Molina. Because, unless you were very excited or entertained by that fight with Ishe Smith…I wasn’t. I don’t think there’s going to be [a reaction,] like, ‘We want Molina, we want Molina.’ I don’t think there is going to be a rally started for that fight.”

A rematch with Lara, however, might be more feasible, considering Lara is managed by DeCubas’ son, Luis DeCubas Jr.

In his last fight in June, Lara rose from two knockdowns to score a 10th-round stoppage of Angulo, who was knocked out by Kirkland in the sixth round in November of 2011.

“My son manages Lara. They fought to a draw the last time. It just depends on what the purses would be,” said Luis DeCubas Sr. “As long as both fighters want it, me and my son can’t say not to it. It’s got to be the right amount of money for both guys. The fighters would have to be satisfied, you know?”