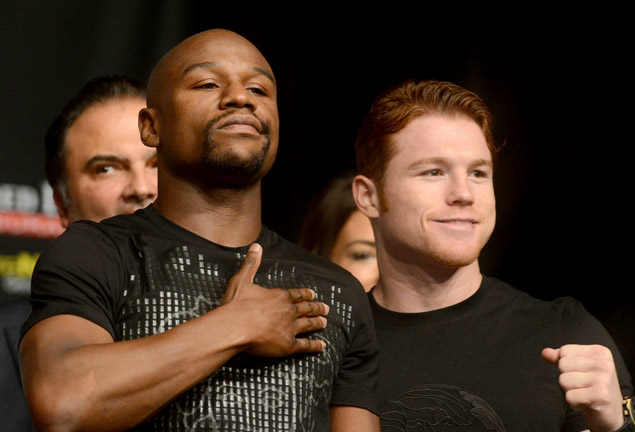 LAS VEGAS — During his turn at the podium for Wednesday’s final press conference, Floyd Mayweather Jr. declared himself to be “at the pinnacle,” while calling Saturday night’s Showtime Pay Per View rival, Canelo Alvarez, “just another opponent.”

A 36-year-old, five-division titlewinner who is THE RING’S No. 1-rated pound-for-pound fighter, Mayweather (44-0, 26 knockouts) will pursue his ninth belt against Alvarez (42-0-1, 30 KOs), a 23-year-old Mexican star who is THE RING and WBC junior middleweight champion.

“I’ve been here before, so I know what it takes. A guy who is 42-0, he hasn’t faced 42 Floyd Mayweathers, because he’d be zero and 42. So I don’t even worry about who he has faced. Whatever any fighter can do good, I can do great. I was born to be here. I was born to be at this level,” said Mayweather, speaking before a large gathering of media members at the MGM Grand, site of his fight with Alvarez.

Mayweather then put a finger to each temple.

“You have to be able to out-match me, mentally,” said Mayweather, “and I’m the strongest mental fighter in the sport of boxing.”

Golden Boy President Oscar De La Hoya, who believes that Mayweather will suffer his first defeat against Alvarez, had told RingTV.com that Mayweather should then face Alvarez again.

Asked if there was a rematch clause in the contract in the event of a Mayweather loss, Golden Boy CEO Richard Schaefer said, “Yes.”

De La Hoya also maintained his belief that the matchup between Mayweather and Alvarez will surpass the record numbers drawn by his fight against Mayweather, which holds the all-time pay-per-view record with more than 2.5 million buys.

“If there’s a fight that’s going to break the record,” said Espinoza, “this is it.” 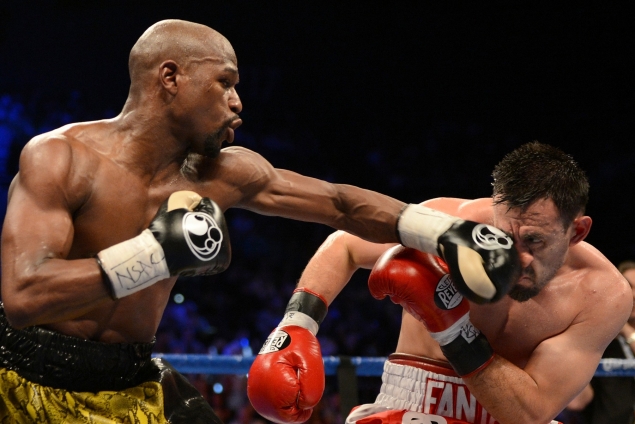 Floyd Mayweather Sr. worked as trainer for his son for the first time in just over 13 years, helping Mayweather Jr. to end Robert Guerrero’s 15-bout winning streak in May.

Were it not for an injured right hand suffered late in the fight against Guerrero, Mayweather Sr. believes his son would have scored the knockout.

“I can’t just say exactly how long the fight’s going to go. I can’t tell you what round, but I personally don’t think that it’s going to go the distance. We’re going to do what we’ve got to do,” said Mayweather Sr., adding that he has little concern about Mayweather Jr.’s right hand.

“We’re definitely going to put some body work in on him. I’m just saying that Floyd’s a good body puncher. Floyd is definitely a good body worker, and we’re going to take care of it. I know what time it is when it’s time to go after him, and you will see that when Canelo gets hurt.”

Floyd Sr. was in Floyd Jr.’s corner when he won his first world title with an eighth-round knockout of Genaro Hernandez in October of 1998 at the age of 21.

Mayweather’s past two victories were by unanimous decision over Miguel Cotto for the WBA’s 154-pound belt in May of last year, and Guerrero for the RING’s 147-pound championship this past May.

Alvarez was 20 in September of 2010 when he scored a sensational sixth-round stoppage win over ex-beltholder Carlos Baldomir, who had gone the distance in losses to Mayweather and Vernon Forrest, defeated titlewinners Joshua Clottey and Zab Judah by 11th-round disqualification and decision, respectively, and knocked out Arturo Gatti in the ninth round.

Since defeating Baldomir, Alvarez has won eight fights, including fifth-round knockouts of former titleholder Kermit Cintron and Josesito Lopez, as well as unanimous decisions over former beltholder Shane Mosley and previously unbeaten Austin Trout, the latter in his last bout in April.

Yet Mayweather Jr. is unimpressed by Alvarez’s resume, which also includes wins over Jose Miguel Cotto and Matthew Hatton, the brothers of Miguel and Ricky, respectively.

Schaefer said that a bout matching WBO middleweight titleholder Peter “Kid Chocolate” Quillin against Gabriel Rosado “is possible” for the undercard to the matchup between light heavyweight titleholder Bernard Hopkins and Karo Murat on Oct. 26 at Boardwalk Hall in Atlantic City.

In his past two fights at Barclays Center in Brooklyn, Quillin (29-0, 21 KOs) dropped Hassan N’Dam six times on his way to a unanimous decision for the WBO belt last October, and he scored four more knockdowns during a seventh-round stoppage of Fernando Guerrero in his first defense of that title in April.

“I don’t see any way possible for Danny Garcia to beat Lucas Matthysse unless he lands a lucky left hook,” said Arano, through Golden Boy’s Ramiro Gonzalez. “It will not go six rounds. Lucas Matthysse will win by knockout before the sixth round.”