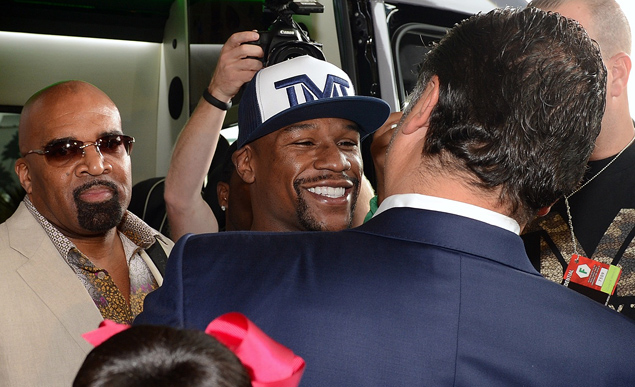 Floyd Mayweather gives Golden Boy Promotions CEO Richard Schaefer a hug on his way to his “Grand Arrival” at the MGM Grand on Tuesday as Leonard Ellerbe (left) looks on. Mayweather, who has become the highest paid athlete in sports while working with Schaefer, hopes his promotional company headed by Ellerbe will be as successful as Golden Boy.

LAS VEGAS – By noon the fans were three deep around the raised red-carpeted runway leading to a stage near the boxing ring set up in the lobby of the MGM Grand on Tuesday afternoon.

It would be four hours before Floyd Mayweather, Jr., and his “Money Team” would make an appearance. The buzz in the gargantuan hotel and casino was palatable. Some of the veteran fight watchers and media said the place hadn’t felt this electric this early in a big fight week since Evander Holyfield-Mike Tyson II.

By the time Mayweather arrived the crowd had swelled to several hundred, jamming every available space in the lobby and spilling into the adjacent casino. They had all come to see the man who is now holding sway over boxing. 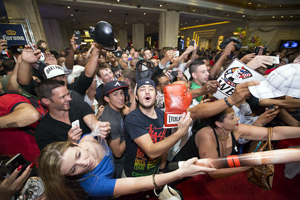 A large majority of them won’t be in attendance when Mayweather takes on RING/WBC junior middleweight champion Saul “Canelo” Alvarez in the Grand Garden Arena on Saturday night. But Mayweather is banking on them buying the Showtime Pay Per View, attending one of the several closed circuit venues on The Strip or watching the fight on one of the 547 movie theater screens.

The highest paid man in sports, who will earn a record guaranteed $41.5 million, can practically hear the cash registers ring. Win or lose against Alvarez on Saturday night, Mayweather will be richer. But the bigger question is whether the sport that has swollen Mayweather’s coffers will be enriched.

Mayweather is now the most powerful public face of the sport with the biggest power broker in the sport, Al Haymon, in his corner. Mayweather’s move from HBO to Showtime sent a ripple through HBO Sports, causing a major shift in the way the cable network conducts boxing business. The network is still trying to find a star boxer. Mayweather has four more fights remaining on a lucrative, multi-million dollar deal with Showtime, which means he probably has two more years left as an active boxer.

In the next two years the search will be on to find someone to fill the void that Mayweather will leave behind. But just as Mayweather stepped forward to fill the vacuum left by Oscar De La Hoya’s departure, there will be someone. Manny Pacquiao seemingly came out of nowhere to captivate boxing fans.

Mayweather seems to be grooming Adrien Broner, a talented but immature lightweight and welterweight beltholder. Mayweather has allowed Broner to share his spotlight during the promotion for the Alvarez fight, having Broner make an appearance on an episode of Showtime’s All Access. Mayweather also made it a point to have Broner close to him when he held court with reporters during a media session following his arrival at the MGM Grand on Tuesday afternoon.

Broner may have the talent to become a Pay Per View star, but his profane and vulgar behavior, often done for the benefit of social media, could be radioactive to sponsors and a turnoff to some boxing fans. Mayweather will have to smooth off those rough edges if he sees Broner as his heir apparent.

There are others who could step forward to fill that void. Andre Ward, an Olympic gold medalist and undefeated pound-for-pound rated boxer who is the king of the 168-pound division. Gennady Golovkin, a middleweight who is quickly gaining fans because of his thunderous knockout power. Golovkin’s stardom arc is similar to that of Pacquiao.

But Mayweather was emphatic when it came to the question as to whether Alvarez could become the next superstar.

“He’s not the future,” Mayweather said. “He’s still going to be a star after he loses to me. I’ve got guys under my banner who are going to be future stars.” 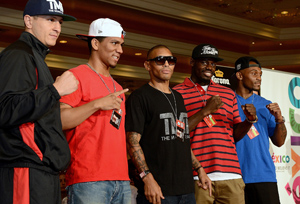 There are 10 boxers signed to the company – seven of them are fighting on the undercard on Saturday night, including its first world champion, Ishe Smith, who will defend his IBF junior middleweight title against Carlos Molina.

When he was in New York for the kickoff of an 11-city promotional tour Mayweather talked about cleaning up the sport, ridding it of incompetent judges, greedy sanctioning organizations and performance enhancing drug cheats. Two of Mayweather Promotions boxers, J’Leon Love and Mickey Bey, tested positive for PEDs.

“By no means, no way that myself and Floyd condone those types of things,” Ellerbe said at the time. “Floyd has been a great example of being the face of the sport and being a pioneer when it comes to these kinds of things. Internally we’ve put some measures in place where we’re going to make all our fighters go through random blood and urine (testing), 365, 24-7. Floyd will continue to lead the way and continue to educate the fighters in any way he can. We took drastic action internally, which I won’t go in detail about.”

And now Schaefer and De La Hoya, acting as co-promoters with Mayweather since 2007, are helping Mayweather Promotions get a leg up in the business. It is a symbiotic relationship for now. 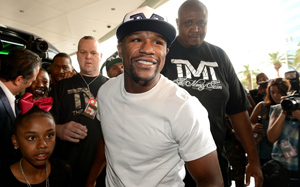 “Golden Boy has done a hell of a job with their company,” Mayweather said. “We’re a small company and our ultimate goal is become huge one day. It’s good that we can work hand-in-hand with Golden Boy. It’s not like it was in the past. We’re not like Bob Arum and Don King where we can’t get along.”

Schaefer said he doesn’t have a signed contract with Mayweather. That’s the way they’ve done business since 2007.

“With Mayweather we don’t need a contract. It’s a friendship. We respect each other,” Schaefer said. “A lot of people don’t understand Floyd Mayweather. Beside his tremendous boxing skills, his loyalty is his biggest asset.”

In the seven fights that Mayweather has done with Golden Boy, he has earned $184 million in guaranteed purses and has become the most powerful boxer in the sport.

“He’s a very smart guy and he knows what he wants and where he has to be,” Schaefer said. “King and Arum have been doing all these Pay Per View (shows for years) and why is it that a company like Golden Boy has done it with breaking all these records. That’s because nobody understands the Pay-Per-View business like we do. Every year Floyd is topping the list of highest paid athletes. In the process we can help Floyd Mayweather establish a business with his young fighters then it’s all well and good.”