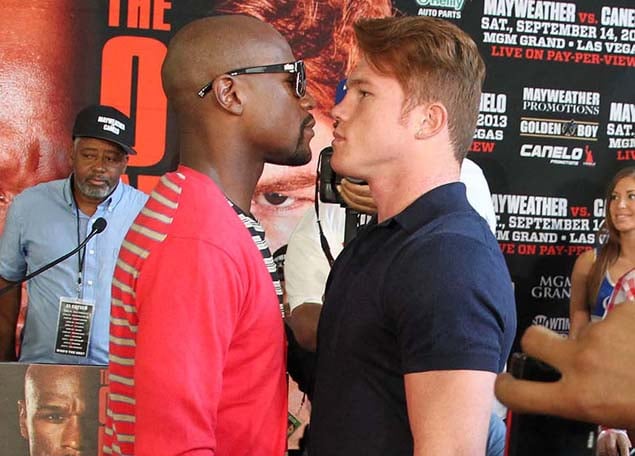 One insider believes that Floyd Mayweather Jr. “boxes the shorts off” Canelo Alvarez, while another stated that he is “going out on a limb” by picking Alvarez when the two unbeaten fighters meet on Saturday at the MGM Grand in Las Vegas.

Golden Boy President Oscar De La Hoya, who lost a split decision to Mayweather in their bout for the WBC’s 154-pound belt in May of 2007, provided RingTV.com with five reasons he believes Alvarez will defeat Mayweather, stating that Mayweather will be stopped in less than eight rounds.

“I just don’t see anything other than Canelo landing a lucky punch that gives him a shot to win. And even in landing a lucky punch, that doesn’t mean that Floyd Mayweather is just going to fold and crumble and be knocked out. Floyd has gotten hit in fights, and he’s taken those hits and he’s come back and he fights. I just don’t see it,” said Ward.

RingTV.com polled 41 boxing insiders regarding their thoughts on Mayweather-Alvarez, a promotion being billed ast “The One” by Golden Boy.

Canelo Alvarez SD 12 Floyd Mayweather Jr.: I kind of like Canelo Alvarez in this fight via controversial split-decision. We saw one about 15 months ago with Tim Bradley and Manny Pacquiao, and I expect this fight to be closer than that fight.

Instead, I believe that he knows that he should be here. I’ve never picked against Floyd Mayweather, but I’m going out on a limb. I’m probably committing prognosticator’s suicide doing this, but I just have a weird feeling that if it’s a good, competitive fight, that Canelo doesn’t even have to actually win this fight to get the decision, if you know what I’m saying.

Floyd Mayweather Jr. UD 12 Canelo Alvarez: Floyd Mayweather by unanimous decision. He’s simply at a different level than Canelo Alavarez and he’s going dictate the terms of the fight as is usually the case.

I see this fight looking similar to the Robert Guerrero fight. I think that Floyd’s going to win a 12-round, unanimous decision.

Mayweather will adapt to this guy because he’s just way too smart for him. I think that Mayweather wins a 12-round decision, and a fairly easy one. 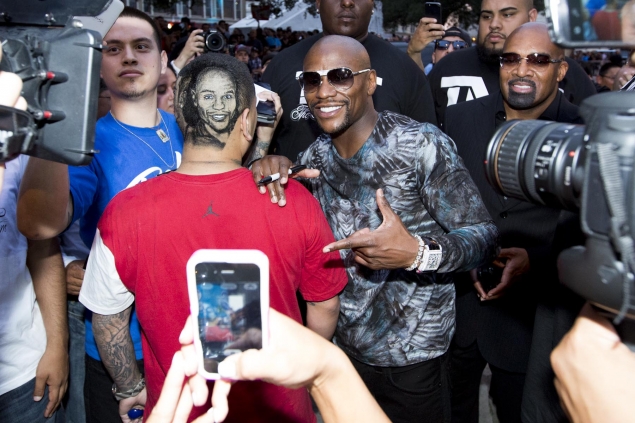 Canelo Alvarez UD 12 Floyd Mayweather Jr.: Yeah, yeah, I know it’s inconceivable that the great Floyd Mayweather lose on points. That might be true at welterweight on down, but at a 152-pound catchweight against a young champion as solid all around as Canelo Alvarez, who could probably fight at middleweight and will likely weigh 165 pounds on fight night, I think Mayweather’s win streak comes to an end.

It won’t be an inglorious end. I think the 36-year-old veteran will score well with his jab and counter right hand, but Canelo will consistently knock him off balance with his own and jab and quick counter punches (particularly the right uppercut and straight right-to-the-chest). Alvarez has stamina issues, but I think he will pace himself. He will get off in explosive bursts and then he will back away.

When he does press Mayweather or get the pound-for-pound king on the ropes, he won’t smother himself or shoot his wad aiming punches to the head; nor will he allow the wily old veteran to tie him up (as Robert Guerrero did time and time again in May). If Mayweather is able to grab and hold Alvarez, who doesn’t lean or lunge in to make that tactic easy, the naturally smaller man will find it difficult to keep hold of the big, young buck.

Floyd Mayweather Jr. UD 12 Canelo Alvarez: Floyd Mayweather once said that punishment ain’t cool. He was right in more ways than just one. His philosophy — and the tactics needed to sustain it – resulted in criticism, but little of the physical damage suffered by most fighters his age. Mayweather is 36-years young.

Never has Mayweather’s stubborn adherence to defense been more important than they will be against an emerging lion, Canelo Alvarez. Alvarez, 23, might get to him early, yet wind up surprised at a Mayweather, who can shake off big punches as quickly as he can elude them. Ask Miguel Cotto.

Over the years, Mayweather has protected the physical assets that have turned him into the best fighter of his generation. There’s a lot left in that bank. One fight ain’t enough to bring him down.

The controversial 152 pound catchweight guarantees that whatever advantages Alvarez might have in size and power are handicapped in favor of the best and most powerful negotiator in the sport.

Mayweather’s supreme talent, high quality of opposition, and invaluable experience on the big stage will carry him to yet another dominating win over a determined but over-matched opponent.

Unless “Money May” gets old overnight on the greatest day of Canelo’s young life, it’s Mayweather by unanimous decision, 118-110.