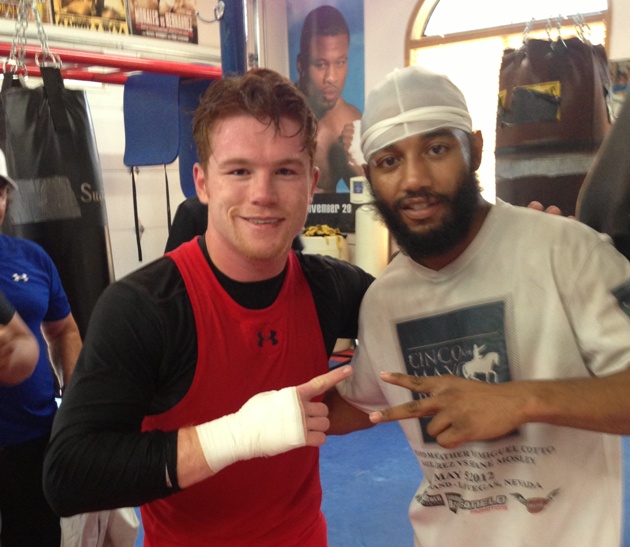 RingTV.com caught up to Philadelphia lightweight Karl Dargan, who was in the camp of RING and WBC junior middleweight champion Canelo Alvarez in advance of Alvarez’s Sept. 14 clash of unbeatens with Floyd Mayweather Jr. at the MGM Grand in Las Vegas on Showtime Pay Per View.

The nephew of trainer Naazim Richardson and a winner of the 2007 Pan-Am Games, Dargan (13-0, 7 knockouts) and junior welterweight Keandre Gibson (8-0, 3 KOs) were said by Alvarez (42-0-1, 30 KOs) to have been “very good” and to “have very similar styles to Floyd” during what has been reported as a revolving door of sparring partners due to injuries relating to their inability to stand up to the power of the 23-year-old Mexican star.

At one point during the second episode of Showtime’s All Access: Mayweather vs. Canelo, Mayweather appeared to scoff at the notion that Alvarez’s power was injuring his sparring partners and forcing them to leave camp — one with fractured ribs, and another, with a dislocated shoulder.

Saying that his current weight is 147, and that he expects to return to the ring as a 135-pounder on Nov. 16, the undersized Dargan claims that he never was hurt by Alvarez, even though he acknowledges the champion’s power during this brief Q&A:

RingTV.com: How long did you spar with Canelo?

Karl Dargan: I sparred Canelo for about four weeks.

RingTV.com: Did Canelo ever hurt you during sparring?

KD: He never really hurt me. I have good defense and I roll off the punches, so even if he hits me clean, I didn’t get the full effect.

RingTV.com: Did other people get hurt by Canelo during sparring?

KD: As far as the other sparring partners, I can’t necessarily say he hurt anyone because I wasn’t there during those actions. However, one of the guys was supposed to come to Vegas but he didn’t come. Rumor is he was urinating blood.

RingTV.com: Does Canelo punch hard, and, if so, is among the hardest punchers you worked with or fought?

KD: Yes, Canelo is very strong. One of the strongest guys I’ve boxed.

KD: Me and Keandre fought hard, and Floyd will do just that. I have good defense, great reflexes, good hand speed, good ring generalship, and a good knowledge to the game. And I believe Floyd has all of that, and that he will use it to the best of his ability on fight night.

RingTV.com: How much or what did you take away from the experience of sparring with a world class fighter like Canelo?

KD: There is a lot that was learned from just being around a world class fighter like Canelo. The experience alone was a great opportunity to see how hard-working he is, and how determined he is to reach his goal, which is to win on Sept 14.

RingTV.com: Will you be able to use what you did against Canelo going forward in your upcoming training and fights?

KD: Working with Canelo and doing the things in the ring against him is really the way I already box. But the experience alone is going to be a great advantaging against my future opponents.