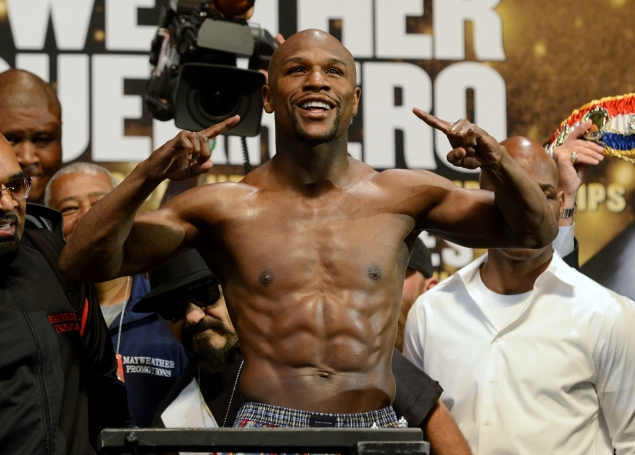 Floyd Mayweather Jr. is bound for the Hall of Fame, having won eight title belts over five divisions. The 36-year-old veteran is not only the sports’ highest paid boxer, but also, the highest paid athlete over the past two years, having parlayed that into a successful promotional company named for him.

For his Sept. 14 clash with RING and WBC junior middleweight champion Canelo Alvarez (42-0-1, 30 knockout), it was confirmed on Wednesday by Golden Boy CEO Richard Schaefer and Mayweather Promotions CEO Leonard Ellerbe that Mayweather (44-0, 26 KOs) will earn a guaranteed $41.5 million purse.

Forbes most recently reported the amount of Mayweather’s purse.

For his win over unanimous decision victories over Miguel Cotto and Robert Guerrero in May of last year, Mayweather pocketed record guaranteed purses of $32 million each. According to Forbes’ Magazine, Mayweather netted a total of $45 million against Cotto.

But as the RING No. 1-rated pound-for-pound fighter heads into perhaps his most difficult challenge in Alvarez, 23, Mayweather lists among his proudest achievements that fact that he has provided for his children and brought his family closer together, including a reunion with his once estranged father and trainer, Floyd Mayweather Sr.

Mayweather reflected on his relatives, his legacy and his imminent retirement during Wednesday’s international conference call, where he also stated that he planned to fight again next May and once more in September of next year.

“As far as my children, and the most important thing and the great thing about my career is that I was able to put them in a comfortable environment. They’re able to get a great education that I was not able to get. My family has been in a comfortable position for 17 years. That’s a great thing. But the mark in the sport of boxing was that I brought the attention to the smaller guys,” said Mayweather.
“I’ve transcended the sport. I was able to make some smart moves, like getting the best and being able to receive the best. I’m leaving my mark in the sport as far as cleaning the sport up. It’s all about just giving the fans excitement, but on an even playing field as far as random blood and urine testing and that’s not just in the sport of boxing, but in all sports when you’re competing at the highest level.”

It was back in May that Mayweather was projected by SI.com’s Fortunate 50 to be the highest-paid athlete in American sports for the second straight year, potentially earning between $90 million and $128 million.

In July of last year, Mayweather was named the highest-paid American athlete for 2012, topping Sports Illustrated’s Fortunate 50 ahead of golfers Phil Mickelson and Tiger Woods at Nos. 2 and 3.

An online report by Forbes’ Magazine estimates that Mayweather’s exclusive multi-fight venture with Showtime and its parent company, CBS Corporation, could be worth a guaranteed $250,000 million to Mayweather, who made his first-ever appearance on Showtime Pay Per View when he beat Guerrero.

Nicknamed “Money,” Mayweather holds the all-time record of pay-per-view buys with more than 2.5 million for his victory over current Golden Boy President Oscar De La Hoya in May of 2007, dethroning De La Hoya by ther’s split-decision for the WBC’s junior middleweight belt.

Mayweather-Alvarez sold out at the MGM in 24 hours, and already has eclipsed the all-time record gate by Mayweather-De La Hoya of $18,419,200 with ticket sales of $19.1 million.

But money has not solved all of the problems for Mayweather, who was incarcerated from June 1 through Aug. 3 of last year between the wins over Guerrero and Cotto.

Mayweather still endures criticism for having not faced Manny Pacquiao, and, in the eyes of some boxing observers, the best fighters over the course of his era.

Mayweather’s promotional company made a big splash on the night he defeated Guerrero when four of his five fighters won their undercard bouts.

“As far as Mayweather Promotions, we don’t want to stack our company with a ton of fighters. Every fighter that’s under our banner, we can not promise them that they’re going to be world champions. I think about that and I talk to fighters about that all of the time,” said Mayweather.

“The only thing that we can do is to keep our fingers crossed, and the only thing that Leonard can do is to do his job and I play a major part to keep working hand and hand with the future fighters, and that’s what it’s about. Keep working with them and try to show them the way. I can hand my torch to them so they can take people to the next level. That’s what it’s about.”

But it has also been about ending the turbulent relationship with Floyd Mayweather Sr., whose presence against Guerrero marked his first time guiding Mayweather Jr. since a unanimous decision over Mexico’s Gregorio Vargas in March of 2000 after having worked his corner when he won his first world title with an eighth-round knockout of Genaro Hernandez in October of 1998.

“I’m happy to be back with my father, and, of course he’s a perfectionist, and I’m a perfectionist. No one is perfect, but we strive to be the best that we can be,” said Mayweather, whose uncle and former trainer, Roger Mayweather, still has a role working with him on the mitts during his preparation.

“The only thing that I can do is try to become a better person, each and every day. I’m happy today because there are so many positive people in our camp. If they’re not positive, then we try to get those certain individuals from around us.”