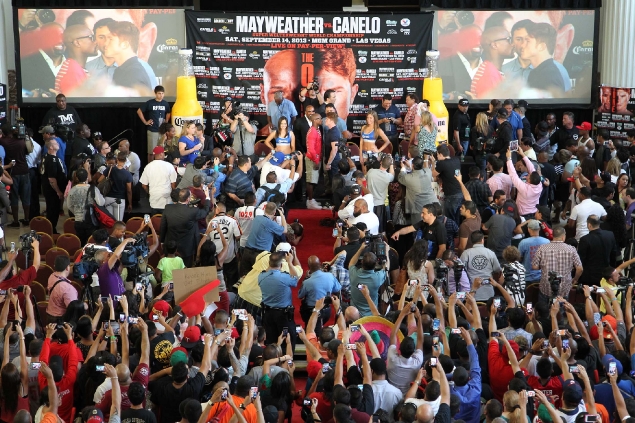 If the initial numbers are to be believed, then the Floyd Mayweather Jr.-Saul Alvarez junior middleweight championship match will be a record-breaking boxing event. Grander in scale, scope and revenue even than Mayweather-Oscar De La Hoya in 2007, the previous record-setter, according to the promoters, marketers and television executives involved in the match.

With the heady marketing strategy, the bullish promotion and the sponsorship tie-ins, Mayweather-Alvarez is being pushed like a blockbuster movie. The only thing missing was the action figures that come with a Happy Meal.

Schaefer outlined a few reasons that lead him to believe it will be a record-setting event. He thinks the popularity of boxing has increased since 2007 and that popularity of Mayweather in the U.S. and Alvarez in Mexico will drive interest in the fight. The main undercard bout between Danny Garcia and Lucas Matthysse is also one of the most highly anticipated matches of the year.

Schaefer said the live gate has already set a record and the closed circuit will set another, and given that the pay-per-view universe has grown from 60 million homes in 2007 to 91 million homes now, it is a good bet that the gross on that aspect of the fight will be higher, even if it doesn’t exceed the 2.4 million buys that Mayweather-De La Hoya did in setting the record.

“The gross was $132 million for Mayweather-De La Hoya,” Schaefer said. “We need to do two million homes to break that gross record.”

The push to take the fight over the top began with an 11-city press tour that kicked off in Times Square three months ago. With each stop on the tour everyone involved could sense the fight growing bigger.

“It clearly is a fight that appeals to the masses,” Schaefer said. “They really came out for the press tour. It was like Beatlemania. I saw how big it was and how big it was becoming at each stop.”

Tickets for the fight at the MGM Grand Garden Arena sold out within a few hours of going on sale. Many of the 5,000 closed-circuit venues are sold out and the $100 tickets are being sold after market for $300. Schaefer said floor seats are going for $48,000 on the secondary market. Presales to Fathom movie theaters are brisk with some theaters already sold out for the fight, according to Michelle Portillo, Fathom Manager of Public Relations.

CBS is throwing its full marketing weight behind Mayweather-Alvarez to the tune of $20 million, opening up all of their platforms to promoting the match. Promos for the fight will be done during the Alabama-Texas A&M game on Sept. 14 – an event that had an audience of 22 million last year. There will also be promos during the Patriots-Bills game on Sept. 8.

Espinoza said the six-episode All-Access program on Showtime is the springboard for wall-to-wall coverage that will begin on fight week.

“The event demands it,” Espinoza said. “Other high-profile events like the Super Bowl, World Series, the Final Four, the NFL, get this kind of wall-to-wall live coverage. It’s something the fans are demanding. They want that inside, behind-the-scenes coverage.”

Schaefer said he is convinced that Mayweather-Alvarez will be a record-breaking blockbuster.

“No matter where you look you see all these signs that lead to something good,” Schaefer said. “It all leads to elevating boxing.”