Morrison gone at 44, but not forgotten 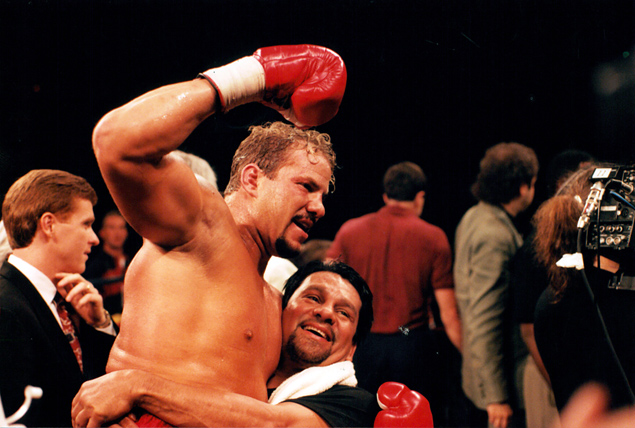 There remains a place inside every boxing fan’s heart for a fighter who, no matter how flawed, is able to climb off the canvas and risk further damage in pursuit of victory.

Tommy Morrison was one of those fighters.

With a left hook capable of erasing most of his in-ring short comings in a flash, “The Duke” was a vital part of 1990s heavyweight boxing, which many consider to be the last great era the division has seen.

During Morrison’s 52-fight career, he was knocked down over a dozen times while sustaining just three defeats. His latest knockdown is one he won’t be able to rise from.

With his wife of two years Trisha by his side, Morrison passed away late Sunday evening at an Omaha, Neb., hospital, ESPN.com reported. The news was confirmed by Tony Holden, who had promoted many of Morrison’s fights and remained a close friend until the end. He was just 44 years old.

While once renowned for his model good looks, awe-inspiring knockout power and his role in an iconic movie series, Morrison would later be known as one of the first high-profile athletes to be diagnosed with HIV in 1996 during a routine pre-fight test. 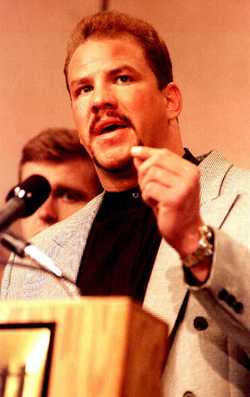 Morrison was denied a license in Nevada and, after a confirmatory test also came back positive, announced his retirement from boxing at a press conference.

“To all my young fans out there, I’d ask that you no longer see me as a role model but see me as an individual that had the opportunity to be a role model and blew it,” said Morrison during the press conference, which was broadcast live by ESPN

Morrison initially accepted his diagnosis, appearing on television in interviews with Larry King and Maury Povich to speak on the dangers of the virus which causes the disease AIDS. But Morrison’s perspective changed years later, and he began to voice his doubts about the virus’s link to AIDS, and the very existence of the virus itself.

Morrison, who had fallen off the radar in recent years, was thrust back into the news last week, when an ESPN.com story reported that he had been close to death from AIDS, having spent the final year of his life in hospice while bed-ridden, unable to speak and surviving with assistance from a ventilator and feeding tube.

Trisha Morrison, who has also been vocal of her HIV denialist beliefs, reported the cause of death to MMADirt.com as “respiratory and metabolic acidosis and multiple organ failure.”

Morrison, a native of Arkansas who fought out of Oklahoma during the peak of his career, turned professional in 1988 after losing a decision in the Olympic trials to the eventual gold medalist Ray Mercer. Years later, Mercer spoiled his unbeaten professional record with one of the most violent knockouts in boxing history in a bid for the WBO heavyweight title.

Though he won 24 of his first 28 bouts by knockout, it wasn’t until 1990, when he was cast as Rocky Balboa’s protege’ Tommy Gunn in Rocky V, that Morrison broke out into the public conscious. The character mirrored Morrison’s real life boxing career up to that point, with a steady stream of knockout victories leading up to a highly-anticipated title shot. In the film, Tommy Gunn won the heavyweight title with a first-round knockout of Union Cane.

In real life, Morrison’s road to the title was far rockier. The Mercer fight – which saw Morrison sustain 15 unanswered punches along the ropes before he finally fell – removed much of the luster that surrounded him. To the astonishment of many, Morrison recovered seamlessly, stringing together an eight-fight knockout streak before getting a second crack at a heavyweight belt.

Overshadowed in contrast with his punching power, Morrison’s defining victory – a unanimous decision win over George Foreman in 1993 – was achieved in large part by his boxing skills. 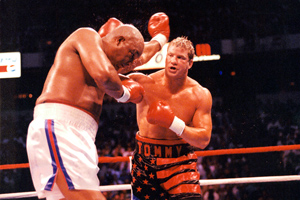 Morrison danced and boxed his way to the one-sided decision victory, earning the vacant WBO heavyweight title in the process. The title win came at a time when Evander Holyfield and Riddick Bowe were trading the recognized championship back-and-forth during one of the greatest heavyweight rivalries in history, however. Morrison would never get his shot to test his credentials against either.

Morrison’s reign was short-lived. After an easy defense over last-minute replacement Tim Tomashek in Kansas City, Morrison was knocked out in one round by Michael Bentt in front of a nationally televised audience on HBO. The loss nixed plans of a multi-million dollar unification bout between with WBC heavyweight title claimant Lennox Lewis.

Morrison would go unbeaten over his next eight bouts, but managed only a draw against Ross Purrity during that streak after being dropped twice. The final bout in that stretch was a come-from-behind knockout of Donovan “Razor” Ruddock.

The bout remains Morrison’s most exciting performance, as both men hit the canvas before Morrison prevailed via sixth-round technical knockout.

Morrison would face Lennox Lewis in a non-title bout in 1995 after Lewis lost his title after suffering an upset loss of his own. The bout was not competitive, and Lewis outboxed and dropped Morrison several times en route to 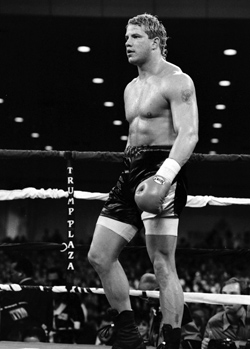 That would be the final bout of Morrison’s competitive career. Four months later, in February of 1996, as Morrison was preparing for a tuneup bout against Arthur Weathers, the news came of his fateful diagnosis. Later in 1996, Morrison fought an unsanctioned bout to raise funds for an HIV organization against Marcus Rhode in Japan. Both parties agreed on a stipulation that the bout would go to the scorecards should either sustain a cut. Morrison dropped Rhode three times en route to a knockout victory.

Life after boxing wasn’t easy for Morrison. There were multiple arrests for offenses ranging from suspicion of drunk driving to weapons and drug possession. Morrison was sentenced to 14 months in an Arkansas prison in 1999.

After several years out of the limelight, Morrison returned to boxing in 2007, knocking out John Castle on a card in West Virginia that also featured Joe Mesi and Humberto Soto. Morrison had claimed – among other things – that his positive HIV tests were the result of a conspiracy by rival boxing promoters to foil his career, while simultaneously claiming that his positive tests were false positives as a result of steroid use.

Morrison was unable to satisfy the demands of a major commission’s request for a negative, independently administered HIV test, and would fight once more in 2008 in Mexico before ending his career with a 48-3-1 (42 knockouts) record.

Aside from Foreman and Ruddock, Morrison’s most notbale victories include knockouts of former heavyweight titleholder Pinklon Thomas, as well as title challengers Carl “The Truth” Williams and James “Quick” Tillis.