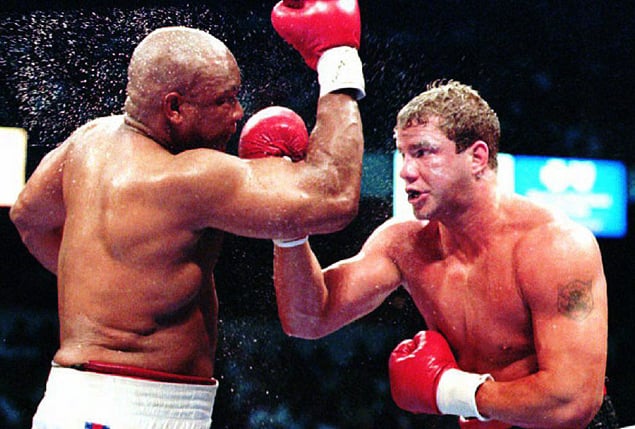 Sweat flies from the head of George Foreman as Tommy Morrison lands a right hand during their fight in June 1993. Morrison, only 24 at the time, won the World Boxing Organization (WBO) heavyweight title with a unanimoud decision.

Former heavyweight titleholder Tommy Morrison passed away on Sunday at a Nebraska hospital, his former promoter and longtime friend Tony Holden told the Associated Press. Morrison, who tested posititve for HIV in 1995, was 44.

Morrison, a strong and powerful boxer-puncher with a brittle chin, was major player at heavyweight during the 1990s, when the division hosted many big names and talented contenders. An Arkansas native who often fought out of Kansas, Oklahoma and Missouri, Morrison was a popular addition to the crowded heavyweight scene because his explosive fight-ending power was balanced with staminia issues and an inability to take a good punch.

Because of his flaws, Morrison’s career highlights include as many losses as victories. He outboxed George Foreman for the WBO title one year before the ageless wonder won universal recognition as the heavyweight champ by knocking out Michael Moorer.

He scored knockouts of former top contenders and title challengers, Donovan “Razor” Rudduck and Carl “The Truth” Williams, but he had to get up from knockdowns in both fights.

Morrison, who compiled a 48-3-1 record with 42 knockouts, was brutally knocked out in five fast-paced rounds by 1988 Olympic gold medalist Ray Mercer in his first bid for a major title (the WBO belt) in 1991.

Morrison, unbeaten in 28 fights and only 22 at the time, looked like the future of the division for three rounds but he was quickly overcome by Mercer’s relentless pressure, iron chine and power punching.

Morrison also lost to future undisputed champ Lennox Lewis in 1995, immediately following his victory over Rudduck. Lewis dominated the bout from the opening round until Morrison was stopped in the sixth.

He never could capitalize on a big victory or gain consistent career momentum. Morrison was stopped in the first round by inexperienced Michael Bentt the same year he won the WBO belt from Foreman. He signed with promoter Don King in late 1995 with the hopes of fighting Mike Tyson sometime in ’96, however his HIV diagnosis dashed those plans and ended his career, though he had three comeback fights – in ’96, 2007 and 2008.

Morrison, it seemed, was not desitined to make it to the pinnacle of the sport.

However, between the Mercer and Bentt losses, he strung together 10 victories that included a network-televised stoppage of Joe Hipp (a tough and entertaining fight, in which Morrison suffered a broken jaw) and the Williams and Foreman wins.

Morrison’s name will not come up in discussions of great heavyweights of the past, but he faced and beat a bona-fide legend and shared the ring with a hall of famer, and perhaps more importantly, he entertained a generation of fight fans who won’t forget his many exciting and dramatic fights on TV.

Holden believes that Morrison would have fared much better in the current heavyweight boxing scene, which is not nearly as deep and talented as it was in the ’90s.

“If Tommy was fighting today, he no doubt would be a world champion,” Holden told the AP.

“You have to look at who he was fighting in the ’90s, the guys in that division were Tyson, Lennox Lewis, Riddick Bowe, Ray Mercer, George Foreman. There’s no one with that talent today. Tommy would absolutely dominate if he were in his prime boxing today.”