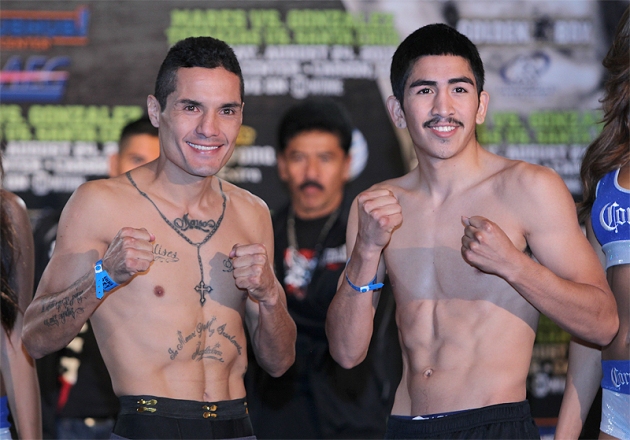 RingTV.com has live, round-by-round updates on this page for Saturday night’s co-main event during which Victor Terrazas was knocked out in the third round by Leo Santa Cruz for Terrazas’ WBC junior featherweight title at The StubHub Center in Carson, Calif.

Santa Cruz and Terrazas are in the ring. Nearing introductions. Santa Cruz weighed in at 121.75 to 121 for Terrazas.

Announcer Jimmy Lennon Jr. is at the helm. Santa Cruz loudly cheered as he’s introduced; Terrazas, gets a smattering of boos.

Round 1: Both men look relatively dry. Santa Cruz throws early jabs, Santa Cruz responds. Santa Cruz lobs a long right that misses. Terrazas lands a nice right and an uppercut. Santa Cruz counters, but takes about three body shots and two overhand rights. Santa Cruz’s highly held guard allows him to move forward and drive home a right, left, right to the head. Clearly Santa Cruz is targeting the body early. Santa Cruz sticks a jab and fires a right. Meanwhiile, it appears that Terrazas’ right uppercut has found a home. Good right by Santa Cruz. Solid left to the body by Terrazas. The round goes to Santa Cruz based on his body attack and the establishing of his right hand. Santa Cruz, 10-9.

Round 2: Santa Cruz rapidly fires to the body and the head with a right and a left hook. Santa Cruz takes a counter-right but continues to target and hammer the body. Still, solid right and left uppercuts are finding their mark for Terrazas. Santa Cruz continues to plow forward behind his jab and body attack. Hard straight right by Santa Cruz. Hard double-left hand by Santa Cruz. Solid five-punch combination has RAISED A WELT beneath Terrazas’ right eye. Double-left hook shakes Terrazas. A right also stuns Terrazas with just under 10 seconds left in the round. Santa Cruz’s round, 10-9; Santa Cruz, 20-18.

Round 3 Santa Cruz starts third round just as he finished the second round, by going to the body with an early left hook. Santa Cruz already has landed twice as any power punches at this point in the fight. A hard right hand finds the mark for Santa Cruz. TERRAZAS GOES DOWN FROM A LEFT HOOK, FOLLOWED BY A RIGHT TO THE TOP OF THE HEAD. TERRAZAS RISES AT THE COUNT OF NINE, BUT Santa Cruz is is on him. HARD RIGHT HAND DROPS TERRAZAS AGAIN. HE’S UP AT NINE, BUT THE REFEREE, LOU MORET LOOKS INTO HIS EYES, DECIDES THAT HE HAS HAD ENOUGH AND WAVES IT OFF.