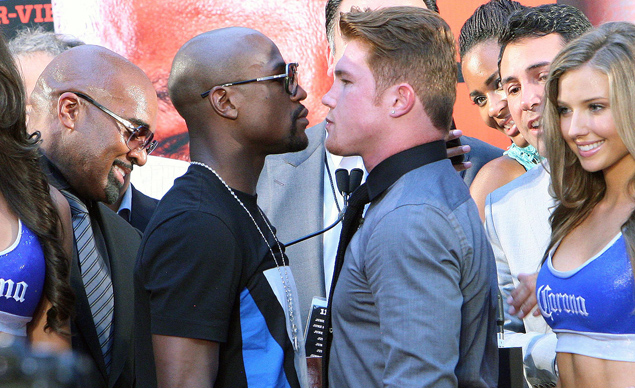 Floyd Mayweather Jr. claims that he is “old enough to be Canelo’s father,” and poses for a rare photo with rival Oscar De La Hoya during the premiere of his All-Access episode with Canelo Alvarez — entitled All-Access: Mayweather-Canelo — that will air at 10 p.m. ET/ 7 p.m. PT on Saturday.

“Canelo is 22. I’ve been at the top since Canelo was 5-years-old. So I think that he’s going to see that it’s a lot different when it’s on this level. I’ve been there before,” says Mayweather, who is 36, in a video narrated by actor Barry Pepper.

“With me and Canelo, I’m old enough to be Canelo’s father. It makes me feel good that a guy like Canelo was young coming up, watching me. He, of course, admired me as a kid. I’ve seen him fight a few times. I’ve seen him role his shoulder and try to use some of my defensive moves. My job is just to go out there and don’t let him use none of my moves on me.”

Click here for a preview video of All-Access: Mayweather-Canelo.

The documentary is being shown in advanced of Mayweather’s fight for Alvarez’s RING junior middleweight championship slated for Sept. 14 at The MGM Grand in Las Vegas on Showtime Pay Per View, the network announced on Thursday.

During All- Access: Mayweather-Canelo, a sample video of which was provided to RingTV.com, red-haired Alvarez is revealed to be the youngest of seven boys who was picked on as “freckles,” and, “cheese head,” by other children.

“I had to fight so that they would respect me,” says Alvarez. “Afterwards, they wouldn’t say anything. They would just stay quiet.”

Alvarez also reveals that “at 16, I got a girl pregnant and had my daughter,” whom he prefers not to be on camera.

“My daughter is very important to me,” says Alvarez, who turned 23 in July. “She made me a more disciplined man. I have to work to give my daughter a good life.”

On Sept. 14, Alvarez will be looking to silence his critics, including Mayweather.

On June 27, the fourth day of an 11-city promotional tour for Mayweather-Canelo, Golden Boy announced that every available seat the MGM Grand Garden Arena had been sold less than 24 hours after tickets went on sale for the megabout billed as “The One.”

The President of Golden Boy Promotions, De La Hoya was dethroned by Mayweather as the WBC’s junior middleweight titleholder in May of 2007.

De La Hoya informed RingTV.com during a January interview that he expected Mayweather-Alvarez to surpass the record numbers drawn by his split-decision loss to Mayweather, which holds the all-time pay-per-view record with more than 2.5 million buys.

Although they’re adversarial relationship has been widely reported, De La Hoya and Mayweather pose for a photo together at one point at De La Hoya’s urging.

“Hey Floyd, come take a picture with me,” De La Hoya requests. “We don’t have one together.”

“Are you sure that you want to take one with me, Oscar?” says Mayweather, before relenting. “I’m just f___ing with you, man, come on.”

Dela Hoya admits that he still simmers, somewhat, about the loss to Mayweather.

“Our 2007 fight will never be forgotten. There was a lot of bad blood, and there was a lot of animosity and hate towards each other,” says De La Hoya. “There still is this little thorn in me that’s stuck right in the side of my ribs that I still haven’t take out.”

De La Hoya makes it known, however, that he wants Alvarez to do what he could not: Defeat Mayweather.

During a ride on an airplane, De La Hoya tells Alvarez, “On Sept. 14, there will be a new rooster,” to which the fighter responds, “I am your rooster.”

“I respect that he’s beaten everybody, and that he still has that ‘0’ on his record,” says De La Hoya. “But one thing that Mayweather has to understand is that my fighter’s going to kick your ass.”

During a workout, Mayweather offers a retort.

“Ain’t no f___ing fighter beating me, talking about, ‘we got the remedy.’ Mother f___er, I am boxing… You’re dreaming it’s gonna happen. You’ve got the same dreams as me, but the s__t ain’t gonna happen.”

The episode also addresses Mayweather’s relationship with Floyd Mayweather Sr., who worked as trainer for his son for the first time in just over 13 years during their unanimous decision over Robert Guerrero in May.

It was right around Feb. 14 — Valentines Day — that Mayweather Jr. announced Mayweather Sr. would be working his corner against Guerrero, replacing his uncle and longtime corner man, Roger Mayweather, and apparently ending a widely-repoted turbulent relationship.

Mayweather Sr.’s presence marked his first time guiding Mayweather Jr. since a unanimous decision over Gregorio Vargas in March of 2000 after having worked his corner when he won his first world title with an eighth-round knockout of Genaro Hernandez in October of 1998.

Mayweather Sr. has this message for Alvarez.

“We know you’re brash, fast and talk a lot of trash,” says Mayweather Sr. “Come the night, Canelo will be flat on his ass.”

“Floyd has always had the power to pick his opponents. They have always been fights that we all knew he was going to win,” says Alvarez. “But this is the fight that the people wanted to see. This is my time to beat Floyd Mayweather.”

Note: All four episodes of All-Access: Mayweather-Canelo will be available at Sports.SHO.com, as well as Showtime’s YouTube channel and at by clicking here.