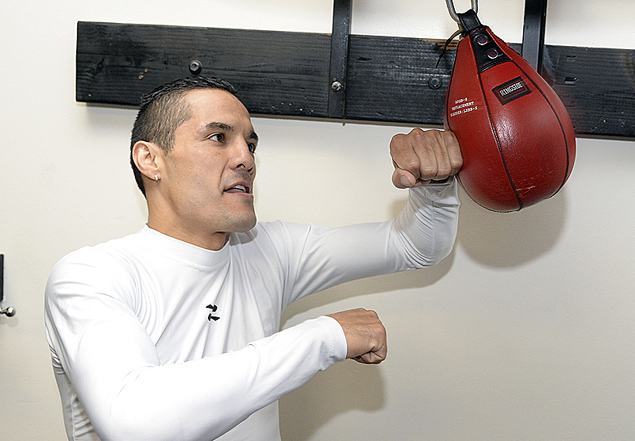 When Abner Mares abdicated his WBC 122-pound belt, it paved the way for fellow Mexicans Victor Terrazas and Cristian Mijares to meet for the vacant title.

When the fight took place at the state of art Arena Ciudad de Mexico in the centre of Mexico City last April opinion was widely split on who the winner would be. As the fight played out the even nature of the bout was evident with both fighters enjoying success but neither able to establish their authority over the other. This was best illustrated when the fight reached the championship rounds. Terrazas appearing to be a head by a point or two but Mijares, a former 115-pound titleholder, clawed his way back in the fight by closing strongly, dropping Terrazas in the final round.

The win allowed “Vikingo,” who escaped the mean streets of Guadalajara through boxing, to achieve his childhood dream. The 30-year-old veteran moved to 37-2-1 with 21 stoppages with the title win.

On Saturday, Terrazas bids to make the first defences of his title against mandatory challenger and rising star Leo Santa Cruz in Carson, Calif. Golden Boy Promotions won the purse bid with a very healthy $526,000 offer, of which Terrazas is entitled to 75 percent. Terrazas-Santa Cruz forms one half of a tantalising doubleheader at the StubHub Center topped by the Abner Mares-Jhonny Gonzalez WBC featherweight title bout. The fights air live on Showtime at 10:30 p.m. ET.

Anson Wainwright: You beat Cristian Mijares by close decision to win the WBC 122-pound title. Could you tell us about the fight?

Victor Terrazas: Well, it was a tough fight but we did a really hard preparation for this fight.

AW: In the last two rounds Cristian Mijares really put the pressure on you, Can you talk about how you felt during those rounds, how you were able to fight back?

VT: I felt good but I was tired ’cause I went to the sauna room a day before the fight (to make weight) so that was what make me feel that way but I was fine. It’s just at the last round, he got me with a left hook.

AW: What did it mean to you when they announced you were the winner? Were you worried, especially with the knockdown against you in the last round?

VT: It meant everything to me, and yeah, I got worried ’cause of the knockdown because it’s the last impression on the judges, so I was a bit worried.

AW: This Saturday, you take on Leo Santa Cruz. What are your thoughts on the former IBF bantamweight titleholder?

VT: Leo Santa Cruz is younger and strong, but I’m ready for him. The one that prepares the best will come off with the win.

AW: Has winning the title changed your life at all?

VT: Yeah, now everybody calls me for all kind of stuff because I’m a champion.

AW: Who are the key members of your team, your manager, trainer and promoter? Also what gym do you train at?

VT: My promoter is Fernando Beltran with Promoter Soles from Guadalajara and my trainers are Jorge Lacierva (a former four-time world title challenger) and Omar Rivera, but Jorge helped me a lot for the Mijares fight. He was pushing me and he was telling me what to do between rounds. I train in Guadalajara but for this fight we trained in Mexico City at Pancho Rosales gym.

AW: You were born and brought up in Guadalajara. In fact you still live there. What was your youth like growing up there? Were things tough for you? 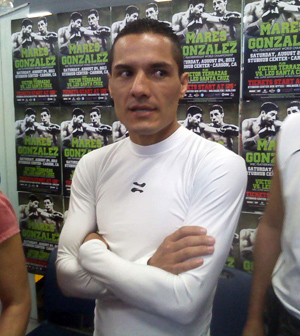 VT: Yeah well my childhood was really tough. I was doing all kind of drugs and boxing got me out of it so I’m thankful ’cause God gave me the strength to keep on the right path.

My life as a kid was really hard. I had to ask (for) tennis shoes and stuff from my friends ’cause I didn’t have any until one day a family took me in. This lady, me Amelia, (she) was like a mother to me even though I fought every day on the streets. She took me in her home and one day a friend took me to the gym. I didn’t like it at first but a month later I came back and I started my dream, and now I’m a world champion. I turn around and look at my family, which is everything to me. They’re part of my life and my work and I prepare myself to be a better boxer each day. Also, I want to thank my team Omar Rivera, Alfredo Tochijara, Jorge Lacierva and Hugo Carrillo. They are a very special people

AW: How did you first become interested in and then take up boxing?

VT: A friend took me to the gym and one of my biggest inspirations was Oscar “El Chololo” Larios (former 122-pound titleholder from Guadalajara).

AW: The junior featherweight division is very strong with some very talented boxers. What do you think of the division including the other current champions, (WBA/WBO) Guillermo Rigondeaux and (IBF) Kiko Martinez?

VT: It’s a hard division now to fight in. However, we gotta talk about (fighting the other titleholders) with my promoters. The Cuban (Rigondeaux) is a really difficult guy to fight and the other one (Martinez), I don’t know him.

AW: Away from boxing what do you enjoy doing with your time?

VT: I love to be with my family and spend time with them, going to the mall, movies; my family is everything I got ’cause I didn’t have a family growing up.

AW: You have an interesting nickname, “Vikingo.” How did that nickname come about?

VT: My friends call me like that cause in the hood I was a tough guy and I like to say that I was like the Vikings.

AW: In closing do you have a message for the junior featherweight division and boxing fans?

VT: I just want to thank the people who helped me to get here and I want fans to know that I’m ready for anyone.

Photo /Gene Blevins – Hoganphotos/Golden Boy Promotions, Doug Fischer
Questions and/or comments can be sent to Anson at [email protected] and you can follow him at www.twitter.com/AnsonWainwright.