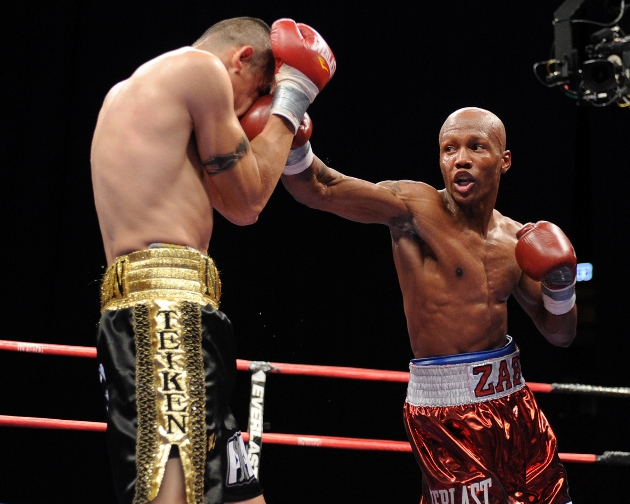 Although Zab Judah turns 36 in October, the five-time two-division beltholder has appeared to restore the “Super” in his nickname with his past two fights.

Judah (42-8, 29 knockouts) hammered previously undefeated Vernon Paris to a TKO last March, and rose from an eighth-round knockdown to give Danny Garcia all that he could handle prior to losing a unanimous decision to THE RING, WBA and WBC junior welterweight April. What’s next for Judah?

“I want to see anybody right now. I’ll take on all challenges. That’s how I want it right now,” Judah told RingTV.com on Monday. ” I stay ready and I’m staying focused. I’m just ready to go again right now.”

One thing that is certain is that when Judah does return in the ring, it will be in association with Golden Boy Promotions, which, on Monday, announced “a joint venture” with Super Judah Promotions to co-promote the Brooklyn-born Las Vegas resident’s next fight likely in the fall, according to Golden Boy CEO Richard Schaefer.

“Super Judah Promotions and Golden Boy Promotions working together is phenomenal,” said Judah, whose fight with Garcia was promoted at Barclays Center in Brooklyn by Golden Boy, in a prepared statement that was part of the press release announcing the deal.

“I have been doing business with Golden Boy Promotions for a number of years, working both with them and against them and I know what it’s like to be on both sides. Through those times, I see that we are a perfect fit. This joint venture will give me the experience I need as a promoter and get me the big fights I want at this point of my career.”

In an e-mail to RingTV.com, Schaefer said he is trying to land Judah in the ring, “Sometime this fall,” adding, “We are currently discussing with Zab and his team different dates and different opponents.”

Prior to the victory over Paris, Judah was stopped in the fifth-round of a 140-pound title bout with Amir Khan in July of 2011. Judah’s other losses were to Joshua Clottey, Kostya Tszyu, Miguel Cotto, Carlos Baldomir, Cory Spinks and Floyd Mayweather Jr., with all but the ones against Khan and Tszyu taking place in the welterweight division.

“We understand the importance of partnering with the best promoter in the business. It’s the difference between having Zab in good fights and having Zab in great fights. Zab only wants to fight the best and Golden Boy Promotions stable of fighters is the best in boxing.”

While a 147-pounder, Judah split victories with Spinks, falling by unanimous decision in April of 2004, but winning the rematch — and the IBF, WBA and WBC 147-pound belts — by ninth-round knockout in February of 2005.

Judah won the IBF’s vacant 140-pound belt by seventh-round stoppage of Kaizer Mabuza in March of 2011 before relinquishing that to Khan. Judah also owns a split-decision victory over Lucas Matthysse from November of 2010.

“I am very happy to welcome Zab to the Golden Boy team. He is without question not only one of the most exciting fighters in boxing, but he also has tremendous name recognition with reaches into the general market,” said Schaefer, in a statement.

“In his thrilling fight against Danny Garcia, Zab showed that he belongs in the absolute top level of the sport. I am looking forward to be working with Zab and his team and have him participate in the biggest fights in the junior welterweight and welterweight divisions.”

Judah said he would have no problem campaigning as a welterweight once more.

“I’m just ready for the best. Big fights. Big fights. It’s fair to say that I could go to welterweight, where I was once the undisputed champion,” said Judah.

“So, I can go up in weight. That’s nothing. Team Judah and Golden Boy are going to make a big announcement shortly about that, so just hold out for that.”