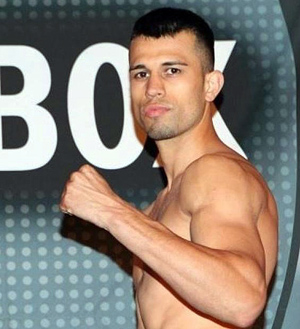 If Francisco Santana never wins another fight in his professional boxing career, he can already walk away ahead of the game. As a young man growing up in Santa Barbara, Calif., Santana suffered from a stuttering problem that had led to him being teased and bullied at school. He’d fight back, but with the numbers against him, there was only so much he could do.

“It would take a long time to spit out a complete sentence without stuttering,” remembers the Mexican-American boxer Santana, now 27, of his speech impediment. “I had a nervous twitch and I think that’s what caused the kids to pick on me.”

His father, a boxing fan who would take him to the fights, first brought him to a boxing gym at age 8 to learn how to defend himself. Boxing taught him how to believe in himself, too.

“I think a lot of the time that I would stutter was because I was so insecure with myself; everybody used to pick on me,” admits Santana. “A lot of [what helped cure it] was boxing. Boxing gave me a lot of confidence.”

In addition to purging his own feelings of inadequacy, the boxing gym gave Santana a place to meet like-minded youngsters who would go on to become positive influences in his life.

One of the fighters, who would go on to become a high school teacher for special needs youngsters, was especially helpful.

“Every time I would stutter he would stop me like ‘Spit out good, relax and take a deep breath,'” said Santana of the man who would go on to serve as the best man at his wedding earlier this year. “Little by little, I grew out of it.”

Now, eight years into his career, Santana is looking to overcome a stutter of a different kind. Following a pair of losses to Karim Mayfield early in his career, and a decision loss to Jermell Charlo in 2011, Santana is working to make up for lost ground in his career. That begins this Friday, when he faces former title challenger Freddy Hernandez (30-5, 20 knockouts) in a 10-round junior middleweight bout at the Chumash Casino in Santa Ynez, Calif.

“I was talking [Gary Shaw Promotions matchmaker] John Beninati, I just feel like it’s time for me to step it up,” said Santana, whose friends call him “Chia.”

Hernandez, 34, has registered wins against former titleholders Mike Anchondo, DeMarcus Corley and Luis Collazo, while all were past their best days. Though he has lost three straight fights (to Erislandy Lara, Demetrius Andrade and Delvin Rodriguez), his durability will give Santana a reliable measuring stick of where he is in his career.

“I was a little weary about taking the fight initially because we’ve had so many fights fall through recently and the opposition we’ve faced has been less than world championship caliber. I wanted one more fight before taking this fight,” admits Joe “Hoss” Janik, Santana’s trainer. “But Chia convinced me, said that our training camps had been good even if the fights had fallen out and we feel he is ready for this challenge.”

Santana will be the first to admit that he wasn’t a star as an amateur. The modest Santana estimates that he had around 80 fights – most taking place between the ages of 8 and 13 – while describing his winning percentage as “fifty-fifty.”

“I’d fight in the nationals but for some reason I’d always lose in the first round,” said Santana. “I wasn’t good at the in-and-out style, I just wanted to power punch everything and end it with one punch and we all know you can’t do that in the amateurs.”

By 15, Santana’s amateur fights became less frequent as he focused more on school, but his boxing education wouldn’t slow down. He continued to accrue experience by sparring with all of the notable fighters in the Ventura County area, helping former lightweight contender Rolando Reyes prepare for his bouts with the likes of Jose Luis Castillo and Stevie Johnston.

Santana turned pro at age 19, signing a managerial deal with Cheryl McCullough (the wife of former bantamweight champion Wayne McCullough) and Stuart Campbell, while Wayne McCullough handled training duties. After signing with California-based promotional company Goossen-Tutor Promotions, Santana relocated to Las Vegas, where McCullough was based, but found the excess of the desert known as Sin City to be too much to handle.

“I wasn’t comfortable in Las Vegas, too much temptation out there, brother,” said Santana, who parted ways with McCullough soon after.

Santana’s deal with Goossen-Tutor began to sour, as well. After racing out to a 4-0 record in his first six months as a pro, the fights began to trickle in slower at a pace of one every six months. Then Santana suffered his first loss, a close split decision to Karim Mayfield in 2008, followed by a fifth-round knockout loss in the rematch a year later. Santana and Goossen-Tutor split after the second loss.

More than a year passed before Santana would step back into a boxing ring. He was unsure of what he was going to do, and pondered going to college or taking the firefighters exam. That’s when Janik called and asked if Santana would be interested in sparring with Victor Ortiz.

Ortiz, who had grown up with Santana in the amateur program, was preparing to face Lamont Peterson in December of 2010.

Little by little, the fire came back.

With Janik in his corner, Santana finally returned to the ring in February of 2011, stopping Adan Leal in the first round. Santana would face two unbeaten fighters in his next two fights, drawing with Julian Williams and losing a decision to Jermell Charlo. Since then, Santana has gone 4-0 against pedestrian opposition, while signing a deal with Gary Shaw Promotions.

Santana’s career is at a crossroads on Friday night. A win over Hernandez would legitimize Santana as a fighter to watch, while a loss would ultimately relegate him to “opponent” status. Victory is dependent on whether Santana can be the fighter he has always believed himself to be.

“It all depends on whether Chia is able to use the game plan we’ve drawn up,” said Janik. “Hernandez brings a lot of pressure, and he has 20 knockouts so we know he can punch. He uses his elbows and head so he knows the tricks, he’s fought a lot of tough guys.

“If we get caught up squaring up and trading punches, it may not be the best night for us. If Chia can use his angles and foot speed and implement the game plan, then we can beat this guy.”