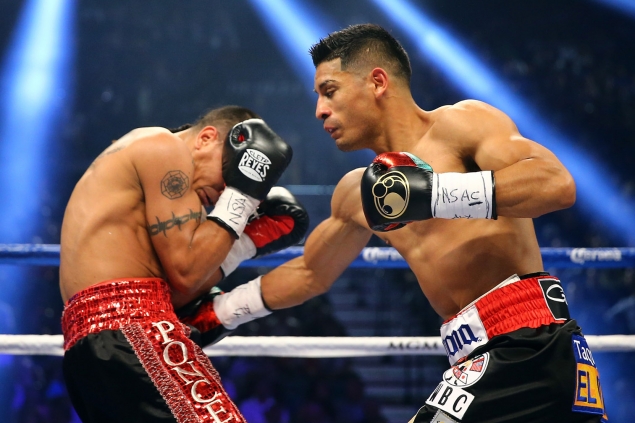 Abner Mares has had something to prove in virtually all of his past seven fights against top opponents, which have taken place in three divisions, bantamweight, junior featherwieght and featherwieght. Mares, currently THE RING’s No. 5-rated pound-for-pound fighter, faced some doubt that he would emerge the winner in some of the fights.

Mares, 27, twice defeated ex-beltholder Joseph Agbeko (the first bout earning him the IBF 118-pound title), earned a split decision over two-division champ Vic Darchinyan and battled to a draw with then-titleholder Yonnhy Perez — all over a 20-month span as a bantamweight — before moving up to junior featherweight, where he outpointed Eric Morel for the vacant WBC 122-pound title last April.

Last November, Mares scored a fifth-round knockdown en route to a unanimous decision over WBA bantamweight titleholder Anselmo Moreno. In his last fight in May, on the Floyd Mayweather-Robert Guerrero undercard, Mares made his featherweight debut with a ninth-round knockout of Daniel Ponce de Leon, which earned him the WBC title.

But as Mares (26-0, 14 knockouts) enters the first defense of his belt against Jhonny Gonzalez (54-8, 46 KOs) on Aug. 24 at The StubHub Center in Carson, Calif., on Showtime, he does so as the prohibitive favorite.

That’s because Gonzalez has had to win two straight fights since losing an eighth-round technical decision to Ponce de Leon last September. That fight ended a 12-fight winning streak that included 11 knockouts.

But that doesn’t mean Mares isn’t looking to take his performance to another level.

“First of all, there’s no pressure at all,” Mares said during a conference call on Thursday. “I’m training the same way that I’ve trained for all of my previous fights. I stil have the same hunger, the same desire to win every fight, and to put on a great show come fight night. I’m glad and blessed that people are seeing what I’ve been saying, which is that I’m one of the best fighters out there, that I’m proving that by fighting all of these tough opponents.

“But as each fight comes to me, they get tougher and tougher, and there is always going to be something to prove. With Jhonny, what do I have to prove? I have to prove that I am one of the best, and that I’m one of the elite, and I have to beat Jhonny. I can’t lose. I just have to win. I’m fighting a tough fighter with 54 wins and 46 knockouts who is a great puncher and an experienced fighter. This fight, I can still gain a lot.”

Does Mares have to win in spectacular fashion, topping his last performance?

“Well, yeah, there’s always that,” he said. “From me, personally, there is always that room for improvement and for learning. I go into the gym wanting to learn something knew, just as I’ve been doing every fight.

Golden Boy CEO Richard Schaefer, in an obvious reference to THE RING’s ratings, said he believed that Mares belongs ahead of RING super middleweight champion Andre Ward, who is rated No. 2 behind Mayweather and three spots ahead of Mares. 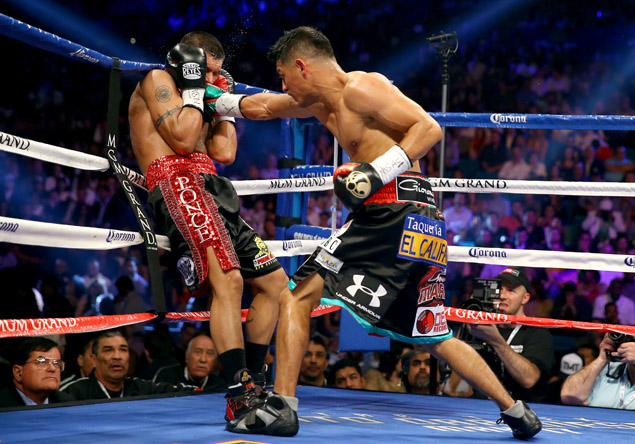 “Andre Ward is there, and he’s a fighter I respect. He won the Super Six Tournament, and Abner Mares won the bantamweight tournament. Both of them fought the best in their division. But look what Abner Mares has done since winning the bantamweight tournament, and look at what Ward has done since then. No question, in my opinion, Abner belongs in the No. 2 spot.”

Gonzalez, who turns 31 in September, has rebounded with consecutive wins over Eusebio Osejo and Akihiko Katagiri by unanimous decision and fourth-round knockout in February and April, respectively.

“In that fight with Ponce, I wasn’t 100 percent, mentally,” said Gonzalez, partially attributing the loss to personal family issues. “That obviously showed in the fight. Styles make fights. Ponce is a southpaw, Abner is not a southpaw. We’ve come 100 percent prepared, mentally and physically, and I think that you’re going to see that in the fight. It was not frustrating at all.

“I was prepared physically very well, but mentally, I wasn’t. I had some outside issues that affected me. Some personal problems. I learned a lot, experience-wise, and I went in there knowing mentally that I wasn’t there, and then, the headbutt broke my concentration even more. But now, I’ve learned from that to not go in there that way, and I’m physically and mentally prepared.”

A win over Mares, said Gonzalez, would more than erase the sour memory of his loss to Ponce de Leon.

“It’s definitely motivation. He’s the best fighter at 126 pounds. I’ve been saying that. That’s why I’ve prepared 100 percent, knowing that if we beat him, that we didn’t just beat anybody, we would be beating the best,” said Gonzalez.

“We’ve trained very hard in the gym and we’ve prepared ourselves very well, as we know that he did. So what I can tell you is that on fight night, it’s going to be a great fight for the public and the fans, just like everybody’s expecting it to be. That’s what we’re going to give them.” 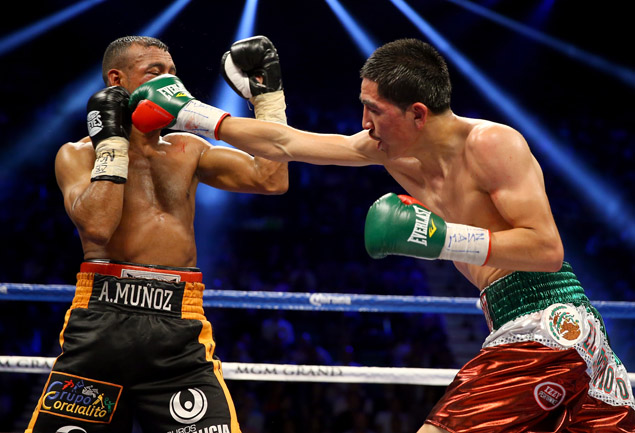 In Santa Cruz’s last fight, also on the May 4 Mayweather-Guerrero card, he debuted as a junior featherweight by dropping former 115-pound beltholder Alexander Munoz twice en route to a fifth-round TKO.

Munoz, who won his first 23 bouts by stoppage, was knocked out for the first time in his career by Santa Cruz, who turned 25 earlier this month.

In returning to the StubHub, Santa Cruz is back where he won the IBF’s bantamweight belt by defeating Vusi Malinga by a unanimous decision last June.

After facing Munoz, Santa Cruz had been mandated to challenge Terrazas, 30, who won the belt vacated by Mares in April by split-decision over Cristian Mijares.

“I think that [Santa Cruz] is a very strong opponent, obviously he’s a young, strong fighter. Stronger than the past opponents,” said Terrazas. “I’ve been saying that it’s a great honor to be on this great card, underneath Abner Mares and underneath Jhonny Gonzalez. I’m very, very motivated and looking forward to it.”

Golden Boy’s card featuring a fight between Marcos Maidana’s knockout of Josesito Lopez on June 8 sold out at the StubHub, and Schaefer expects the same thing with Mares-Gonzalez, Santa Cruz-Terrazas.

“Current ticket sales are ahead of where we were with a little more than a week to go for Maidana and Lopez,” said Schaefer. “So it’s going to be another tremendous night at the StubHub Center.”

Santa Cruz would be up for facing Mares.

“If the fans want it, and the networks want it, and we have an opportunity to make it for both fighters for a substantial amount of money, then let’s do it. I know that Abner and Leo are the kinds of fighters who never turn down anyone. They’re always up for a challenge,” said Schaefer.

“Both of them, as I said, are tremendous, tremendous fighters, and both of them are super nice guys outside of the ring. They respect each other, and they’re a pleasure to promote. We, at Golden Boy, believe that the best should fight the best, and if it’s going to happen that both of those guys, who are considered the best in these weight classes, if that fight is going to happen, then we certainly won’t be standing in the way.”

But first, said Shaefer, Mares must get beyond Gonzalez, and Santa Cruz, past Terrazas.

“I think it’s totally, totally, totally premature to discuss a potential fight between Abner and Leo. Let’s see what happens August 24,” said Schaefer. “I think both fighters should have maybe a couple of title defenses, and then we’ll see, assuming everything goes well. Let’s do first things first.”

LUIS COLLAZO RETURNS TO THE RING ON SEPT. 2

Southpaw former titleholder Luis Collazo (33-5, 17 KOs) will face Alan Sanchez (12-2-1, 6 KOs) on the Sept. 2,  second edition of Golden Boy Live! in San Antonio, Tex., which will air twice a month on Fox Sports 1 and is being promoted by Golden Boy, according to Golden Boy matchmaker Robert Diaz.