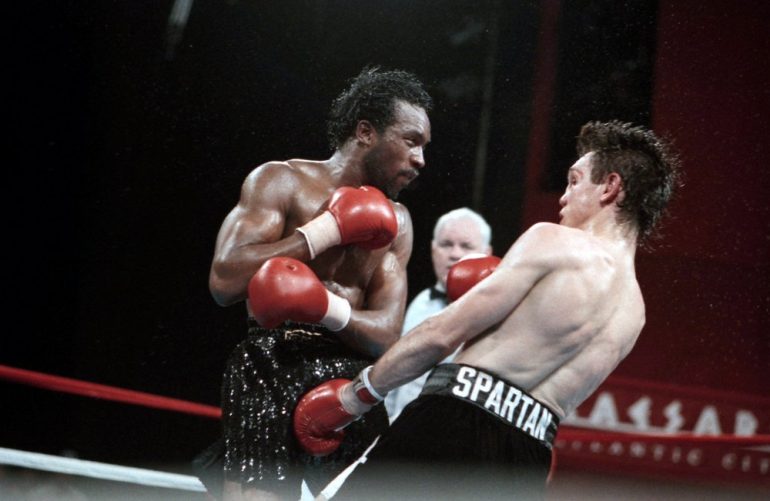 “Doug DeWitt walked over to me in the ring and said, ‘You’re going down.’ I replied, ‘I might be going down, but you’re STAYING down!” – Nigel Benn

There was never any pretense about Nigel Benn. The magnetic two-weight world titleholder captured the hearts of millions during arguably the most enthralling period in British middleweight history and his own heart was always splattered across his sleeve.

“The Dark Destroyer” won his first 22 fights by knockout and, during that run, was only extended beyond two rounds on three occasions. Mean and merciless, the former soldier attacked the opposition with lethal power shots and when he was hurt himself, there was no fighter more dangerous.

Talented and ill-fated middleweight Michael Watson sensationally upset him in May 1989 but Benn regrouped by venturing to the United States to capture the WBO middleweight crown from battle-hardened warrior Doug DeWitt in eight savage rounds.

In his first title defense the trigger-happy Brit was pitched in against the equally explosive American veteran Iran Barkley. “The Blade” was installed as favorite, having recently stopped Thomas Hearns in three rounds and he had also pushed Roberto Duran and Michael Nunn to the limit in close decision losses.

Benn destroyed Barkley in the opening round and sent shockwaves through the sport.

In November 1990, Benn suffered his second defeat at the hands of enigmatic showman Chris Eubank and one of the most turbulent rivalries in British sporting history was born. Like Ali and Frazier, both were the polar opposites, but what they shared was immense fighting heart and insurmountable pride.

Shortly thereafter Benn moved to super middleweight and the drama continued. He was on the unlucky side of a draw in a rematch with Eubank and the finest victory of his career, against the rampaging Gerald McClellan, was overshadowed by the bout’s tragic aftermath. 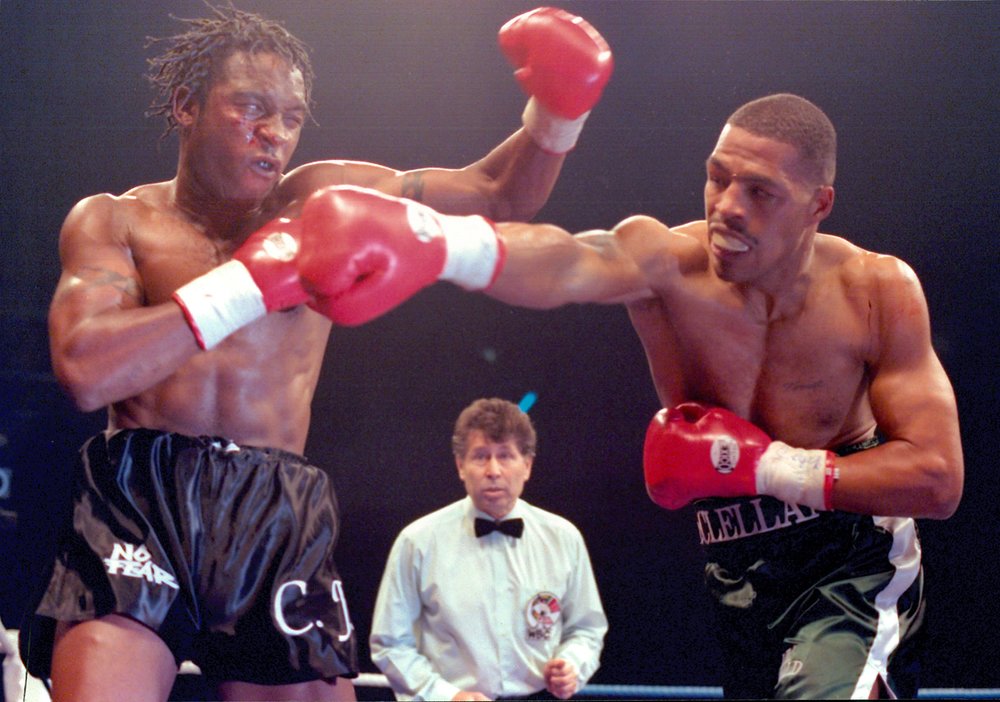 Benn (left) and Gerald McClellan. Photo by The Ring Archive

“The Dark Destroyer” closed out with a pair of losses to Irish gladiator Steve Collins, but the sad ending could never detract from what was an amazing success story.

BEST JAB
Nicky Piper: He kept leaning back and picking me off with the left hand, until I caught up with him. Sugar Boy Malinga was very effective with the jab and another American by the name of Lindsay Morgan was tall and used that punch pretty well.

BEST DEFENSE
Michael Watson: When we fought in 1989 I was like a bull in a china shop and my trainer at the time said, “Nigel, just go out there and steam him.” I’ve read a lot of boxing books in my time but I have no idea what steam him means. I’ve yet to find an explanation of that term anywhere, but that was the type of corner I had at the time. I’d thrown everything at Watson over the first five rounds and I couldn’t damage him. I also found out later that Michael gave a wink to my corner as if to say, “I’ve got your boy!” Michael had Mickey Duff and a good team in his corner and they had a lot of experience. It was my first loss and I was devastated and all that was left in the changing room was me and my jockstrap. Everyone deserted me.

BEST HANDSPEED
No One: I can’t recall who excelled in that area to be honest. They probably beat me and I’ve did my best to forget (laughs). I can’t even say there was anyone in sparring because I didn’t do a lot of fighting in the gym. I maybe did 20 or 30 rounds in training because I only wanted to establish my distance. A lot fighters like to have wars in the gym but that wasn’t for me because I would just burn myself out. That changed when I went to the Fifth St. Gym in Miami and I was forced to do more sparring. I worked with a guy called Adolpho Washington who was a cruiserweight and the double of Mike Tyson when he put on the head gear. I found myself trying to be friends with him so he wouldn’t want to spar with me anymore (laughs).

BEST FOOTWORK
Dan Sherry: Dan Sherry had good feet. He ran right into an awesome right hand but he had good feet (laughs). He could switch hit, chop and change, and his hands were fast so that he was able to keep me turning.

SMARTEST
Reggie Miller: He was the first fighter to almost take me the distance but I finally stopped him. It was my 12th fight and I was on my last legs just prior to the knockout. He was a really good fighter and an effective switch hitter. He was cute defensively, but he thought he had me and left himself open.

STRONGEST
Juan Carlos Gimenez: Robbie Sims was good inside but I would say Juan Carlos Gimenez. He also fought Eubank and Calzaghe and only Joe managed to put a dent in him. He was always banging his hands together wanting more and he was so strong – I’m talking as strong as an ox. As soon as I hit him I knew I wasn’t stopping him – he was going nowhere.

BEST CHIN
Chris Eubank: Chris Eubank and you don’t even need to ask me that (laughs). I could hit Chris’ chin with anything and it wouldn’t even move. It was like hitting a lump of granite but to be honest I enjoyed pummeling that chin (laughs hysterically). Look, I love Chris and we’re old men now, so I can laugh and joke about it. I needed him as much he needed me.

BEST PUNCHER
Gerald McClellan: As I said, the gap between him and the rest in terms of power was huge. He was in a league of his own, but I had to win that fight because everyone thought I was going to lose. What happened was I was due to fight Michael Nunn and it got back to me that I would have to take $100,000 less and I said, “Are you mad?” Michael was a slippery southpaw, his name was “Second to” Nunn and I’ve to take $100,000 less? That could have been my last fight because Michael was one of the best around at that time, so I said no chance. The answer I got was, fight Nunn or we’ll bring over a mini-Mike Tyson (McClellan). Now, you have to understand I was in the army and had a ton of street fights, so I’m not scared to take on anyone. I’m not made that way, but once my fight with Gerald was over I should have retired.

BEST BOXER
Sugar Boy Malinga: Sugar Boy Malinga springs to mind. He wasn’t the classiest of fighters, he was just my bogeyman. Malinga was very difficult for me, and even though I won the first fight, I could easily have lost it. I think I got the decision because I was on home soil. In the rematch I trained so hard for him, but I was knackered and just completely jaded. He is one of the only fighters to really hurt me and he did it with a punch to the mouth which split my tongue and my lip. I was overtrained in the second fight, but I can’t really take anything away from him. Give me a guy who stands there and wants to fight and I’ll be victorious, but I knew this guy was slippery. I could see Malinga’s punches coming but I couldn’t do anything about it. Even when I knocked him down I was shattered and I knew I was in for a long night. He deserved to win the rematch and he was a lovely man, so I only have good things to say about him. He met up with Richie Woodhall after me and lost the title (WBC super middleweight) straight away.

BEST OVERALL
McClellan: Gerald McClellan by far. He had an incredible knockout ratio and he was a prolific puncher. There was a mile between him and anyone else. I came out of that fight with a damaged nose, a damaged jaw and I was urinating blood. I was in bed for three days afterwards and I had a shadow on my brain. That shows you how powerful a champion that man was.