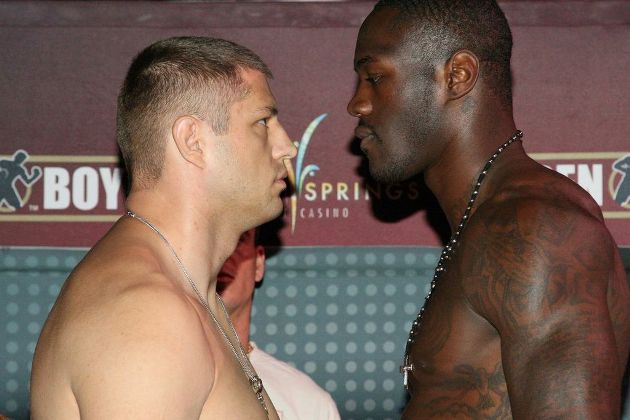 RingTV.com will be posting live, round-by-round updates on this page during tonight’s Showtime-televised first round stoppage victory by heavyweight knockout artist Deontay Wilder over ex-beltholder Sergei Liakhovich at the Fantasy Springs Resort and Casino in Indio, Calif.

Wilder (29-0, 29 knockouts) was coming off a first-round knockout of 2000 Olympic gold medalist Audley Harrison in April, while Liakhovich, 36, is 2-4 with two knockouts since rising from a seventh-round knockdown to defeat Lamon Brewster for the WBO belt in April of 2006.

WILDER WINS BY FIRST-ROUND KO AT THE 1:43 MARK

Round 1:.Wilder fired a crisp, piston-like jab from the opening bell, moving to his left, and then, to his right, appearing to be relaxed the entire time. Liakhovich double-jabbed, but was unable to penetrate Wilder’s highly-held guard. Wilder landed a left hook, followed by a jab. He then takes the second of a double-jab from Liakhovich. Wilder cracks home a left-right combination, after which the fighters trade jabs. With 1:24 remaining, Wilder lands a head-swiveling jab and appears to sense that Liakhovich felt it. Another jab, followed by a hard right chases Liakhovich to the ropes, where TWO MORE SLEDGEHAMMER RIGHTS DROP LIAKHOVICH TO HIS BACK ON THE CANVAS AT THE 1:18 MARK, HIS LEGS QUIVERING. IT’S OVER AS REFEREE TOM TAYLOR STEPS, CRADLES LIAKHOVICH’S CHIN IN HIS LEFT HAND AND CUPS HIS HEAD WITH HIS RIGHT, SIGNALING THE END.

WILDER WINS BY FIRST-ROUND KO AT THE 1:43 MARK