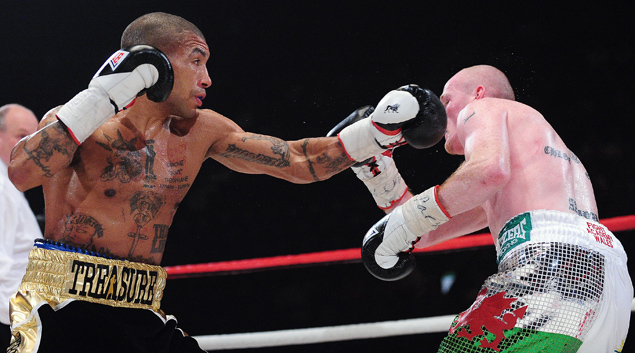 Ashley Theophane has been coming to the Mayweather Boxing Club in Las Vegas for two years now. After going to train in New York last year, he thought he would swing by Las Vegas to see what it was like to work in the same gym as Floyd Mayweather, regarded as the sport’s best fighter pound for pound.

Theophane detailed that experience in the May 2012 edition of renowned British boxing publication Boxing Monthly, as he shared details of being in awe of the dedication Mayweather possesses.

Tweets over the last few days seemed to indicate that Theophane became the newest addition to Mayweather’s promotional stable, Mayweather Promotions. RingTV.com caught up with the British junior welterweight, who confirmed he has signed.

“Leonard [Ellerbe] announced it a week ago to the team that I was a part of Mayweather Promotions,” Theophane told RingTV.com prior to Mayweather getting in a workout on Tuesday afternoon.

“It started with going and doing roadwork with Floyd,” Theophane said. “He know I beat Delvin Rodriguez and heard that I had given Danny Garcia quite a scare. He told me he could get me a fight, and that’s how it started. It was a step by step thing, and now I just have to wait. The hard work was worthwhile.”

Theophane hasn’t fought since December, where he picked up a quick first-round knockout over a journeyman to stay busy. Two fights prior, Theophane suffered an upset to pro novice Darren Hamilton in May back in the United Kingdom.

Theophane hasn’t fought in 2013, but it isn’t for lack of being offered fights.

“Frank Warren was offering me fights, I had opportunities. I turned down some good fights because I wanted to work with Floyd and Leonard,” said Theophane. “I’ve been in the gym, hoping to get the opportunity.”

Mayweather Promotions does not baby their fighters. When asked if he is ready to be thrown to the wolves immediately, Theophane sounded anxious for the chance.

“For me, I fought Danny Garcia, Delvin Rodriguez, and both of those guys have some big fights coming up,” said Theophane. “I’m 32 years old, I’m looking for big fights. I’m waiting for Mayweather Promotions to announce my next fight and I’m pretty sure it’ll be a big fight.”

When Theophane showed up two summers ago in Las Vegas, he hadn’t dreamed of becoming a Mayweather fighter. 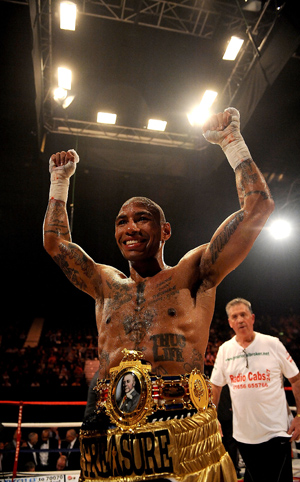 “I was British champion at the time, training in New York. I showed up in Las Vegas to see Floyd train and to get in some work. Since then, they have treated me like I was one of the team even though technically I wasn’t at that point.”

Theophane has been sparring with Mayweather ahead of the pound-for-pound king’s anticipated Sept. 14 showdown with Saul Alvarez, which puts him in rare company.

“This is the first camp I’ve been sparring with Floyd,” he said. “To get in there with him was great in itself, being in there is like being in school.”

Theophane has been a tough luck fighter throughout his career. On ESPN2’s Friday Night Fights in 2010, he lost a narrow split-decision to current junior welterweight champion Danny Garcia. Two fights later he beat Delvin Rodriguez, but was unable to capitalize much on the momentum stateside.

If there is one fighter that’s traveled a similar career arc to Theophane, it’s stablemate Ishe Smith, a junior middleweight titleholder who has sparred Theophane in the past.

“I think our careers are similar,” Smith told RingTV.com Tuesday while at the gym. “Both of us had tough roads, came up the hard way; took short notice fights. People don’t realize he beat Delvin; he’s been around the block. He doesn’t need a lot of grooming, he’s right there, I think.”

Smith is a fighter whose career seemed to be almost over before Mayweather threw him a life vest last year. With the guidance of Mayweather and Ellerbe, Smith was able to get navigated to a title shot against Cornelius Bundrage.

“I said to Ashley, ‘This is the second chapter of your career.’ They didn’t win me the title, but they got me the opportunity. I had two fights in Las Vegas and then had to go on the road. I told him they can get you to the door, but it is up to you what you do with it. Are you going to kick it in or just try and walk through it? It is up to you.”

Theophane sees a lot of motivation in what Smith has been able to do in his short time with Mayweather’s help.

“Ishe told me he knew my name from British boxing fans telling him we had similar careers,” said Theophane. “It’s just about getting the opportunity. I’m with the right team now. Floyd and Leonard are going to get me those opportunities; I just have to be ready to take them.”

Smith sees the way in which Theophane can become a champion the way the Las Vegas native has.

“Ashley is in his thirties, so you have to move him accordingly,” said Smith. “Two or three fights, a title shot. He’s helping Floyd prepare right now, he’s worked with Mickey Bey; I’ve sparred him, so he’s been getting great work. I’m really happy he’s getting an opportunity.”

It would be easy to understand why Theophane would have been intimidated showing up at the Mayweather gym two years ago. The fact was, he showed up like he belonged there and quickly fit in with the rest of the team. He’s a humble person who you can tell has enjoyed his turn of luck.

“I’ve got two champions in the gym, just sparred Ishe yesterday, I spar Floyd, so I’ve got the best work in the world,” he said.

Now it’ll be a question as to whether or not the British fighter can be the next to succeed as Mayweather’s apprentice.

Love ready for another test in November

Mayweather Promotions middleweight J’Leon Love has been back in the gym regularly and is ready to put his positive drug test from his May fight with Gabriel Rosado behind him. 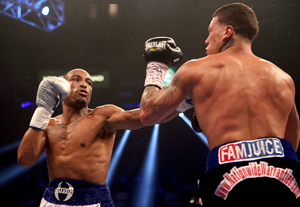 The 25 year old is coming off his toughest fight, where he came off the canvas to edge a controversial split-decision over his experienced foe. The bout was later overturned to a No Contest following a positive test for a diuretic.

Love told RingTV.com on Tuesday that he is looking to return to the ring in November, and not against a slouch.

“I don’t need a tune-up, I’ve been in the gym every day, getting ready,” said Love.

Love indicated he’d love to do a rematch with Rosado to prove that he wasn’t himself that night. He seemed very confident that in a second fight, he’d dominate and earn a clear and clean win.

Whoever the opponent is, Love said it’ll be a legitimate opponent.

“I don’t know what the other promotional companies do, but we get a list of the top guys and that’s it,” said Love. “Any of the guys ranked in front of me, Rosado, Curtis Stevens, Jermain Taylor, let’s do it.”

“I like the way he fights, he can punch,” he said. “But the door is open for Curtis Stevens or whoever to come fight me.”