THE RING Magazine September issue: At a glance 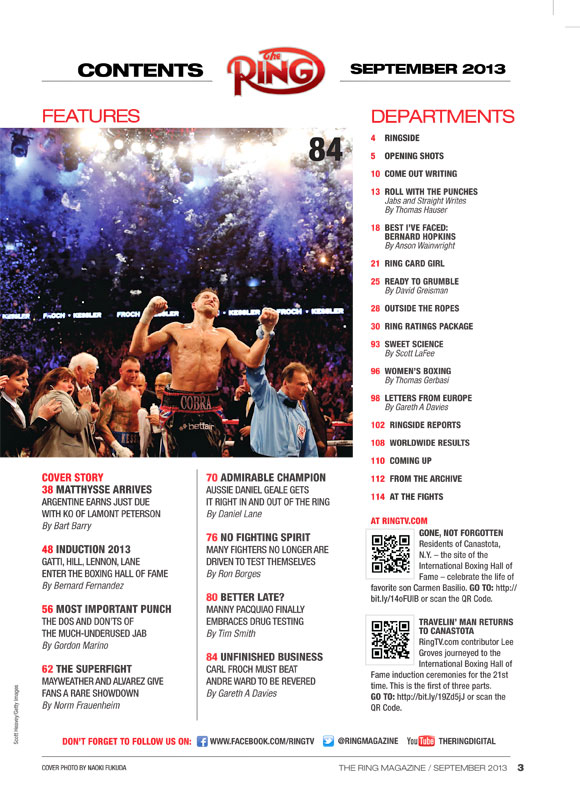 Lucas Matthysse seemed to be a fighter on the verge of a major breakthrough. The power-punching Argentine had given hell to some of the best boxers in his division since he began testing the waters in the U.S., winning some fights but twice coming up on the short end of controversial decisions.

On May 18 Matthysse took charge of his career, scoring a brutal third-round knockout of Lamont Peterson in a fight many believed would be competitive. With that triumph, Matthysse took his undisputed place among the best fighters in the world.

In our September 2013 issue, THE RING’s Bart Barry explores in Louder than Words the soft-spoken Matthysse’s rise to the top of the sport and the lucrative future that appears to lie ahead of him.

“It took a little bit longer,” Golden Boy matchmaker Robert Diaz said of Matthysse’s tardy acclaim. “Because of the two ‘losses’ he has on his record – which I feel he won both – people didn’t give him credit. But now people are like ‘Lucas, Lucas, Lucas!'”

Also in this issue, in Tinged with Sadness, contributor Bernard Fernandez looks back on a bitter-sweet International Boxing Hall of Fame Weekend. The boxing world celebrated this year’s inductees – including Virgil Hill – but mourned the loss of others, including Carmen Basilio (the Hall’s inspiration) and inductee Arturo Gatti. 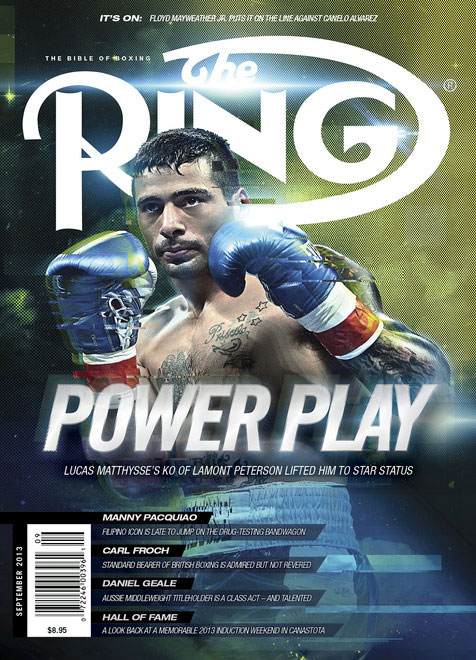 In The Real Deal, contributor Norm Frauenheim explains how the biggest fight in years – Floyd Mayweather Jr. vs. Canelo Alvarez on Sept. 14 – came together and what it means. Included in the Mayweather-Alvarez package are 10 key questions going into the fight.

Contributor Daniel Lane writes in Gentleman from Down Under that middleweight titleholder Daniel Geale gets it right both in and out of the ring.

In What Happened to Pride?, contributor Ron Borges writes that young fighters don’t seem to be as interested as their predecessors in proving that they’re the best.

Contributor Tim Smith writes that Manny Pacquiao is Late to Join the War against PEDs.

And in One More Mission, columnist Gareth A Davies writes that Carl Froch has earned the respect of his countrymen but must beat Andre Ward in a rematch for him to be fully embraced.