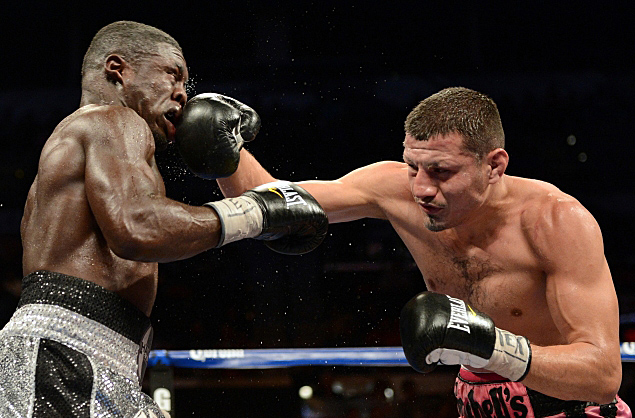 After Andre Berto was battered from pillar to post Saturday at the hands of gatekeeper Jesus Soto Karass, the question surfaced: Is Berto finished?

The answer depends on your definition of finished. Will Berto ever be the fighter HBO shoved down our throats? No, Berto has far too many flaws – mainly sloppy footwork. He constantly falls over his own feet inside the squared circle.

If anyone ever needed that famed piece of string Rocky Marciano used to correct his troubled feet, it’s Berto, who also has terrible balance and a shaky chin, as evidenced by knockdowns against the limited Cosme Rivera before multiple knockdowns against Victor Ortiz and then Robert Guerrero. Then he was knocked out by Soto Karass.

And of course, there’s Berto’s defense, which is to say he has none. 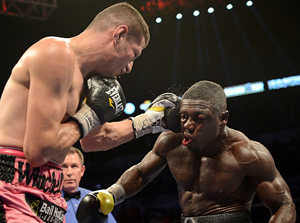 Berto often squares up with his opponent, leaning into incoming punches, rather than riding with the shots by turning his head away to soften the blow.

But all of Berto’s shortcomings have turned him into one helluva TV action fighter. And what he lacks in fundamentals, he makes up for with a warrior spirit and toughness.

Despite his blend of power and speed, which is what enamored Berto with HBO in the first place, he likely is now relegated to being the B-side on telecasts. And although he’s just 29, with the amount of beatings he’s taken, he probably doesn’t have many meaningful fights left.

But Berto will likely trudge on, accepting lesser purses for lesser fights, all while his skills deteriorate.

Saturday’s post-fight interview was a sad scene. Berto’s eyes were swollen shut, his speech slurred as he fought back tears. He probably knew it was the last time he’d enter a main fight as “The Guy.” Though he blamed a shoulder injury for the defeat, deep down he must know the reasons have more to do with his lack of boxing acumen. What lies ahead for Berto is anyone’s guess. But we’ve seen this movie before.

We knew Jermain Taylor, another Al Haymon client, was done after he was knocked cold by Arthur Abraham in 2009. Taylor was 31 years old and just two years removed from his lineal middleweight title reign. But it was clear he had been slipping following consecutive losses to Kelly Pavlik. He looked ordinary against a past-it Jeff Lacy before back-to-back final-round KOs to Carl Froch and Abraham did him in. 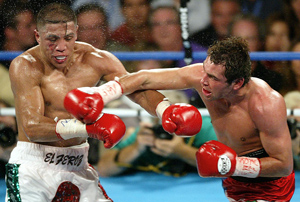 We knew Fernando Vargas was done as a contender after he was brutally knocked out by Oscar De La Hoya. Vargas had already been stopped by Felix Trinidad, of course, a fight that tacked on thousands of miles onto Vargas’ odometer. After the De La Hoya fight, Vargas fought fringe contenders in an attempt to restore his credibility. He parlayed the winning streak into consecutive bouts with Sugar Shane Mosley, both of which he lost by knockout. Afterward, everyone knew he was done as a top fighter. Vargas was just 25 when he lost to De La Hoya.

Berto will fight on, too, but he will have to realize that his earning power has dramatically decreased after dropping his third loss in four fights. He’ll have to be more realistic about purse demands. Gone are the days of high six-figure paydays against the likes of Freddy Hernandez. Unless Berto can score an upset victory, he’ll be the guy managers match their top prospects with in an attempt to get a name on their record.

It’s the boxing circle of life. And it’s cruel.

The co-featured scrap between Omar Figueroa and Nihito Arakawa was fantastic and deserves Fight of the Year mention, but as of now, my vote goes to Tim Bradley-Ruslan Provodnikov. Bradley-Provodnikov offered the ebbs and flows you look for in a Fight of the Year – a bout where the winner was in doubt up until the scores were announced. The drama of the final round cemented it for me.

Keith Thurman was impressive yet again. The welterweight power-puncher probably won’t be an elite fighter, but I can see Thurman being a solid contender for years to come. He’ll probably pick up a title in the not-so-distant future.

News broke last week that Guillermo Jones tested positive for a performance-enhancing drug in his sensational victory over Denis Lebedev, but we shouldn’t rush to judgment. The positive test was for Jones’ A Sample. If his B Sample tests positive, then the result of the Lebedev fight likely will be overturned to a No Contest.

Andy Ruiz was impressive scoring a fourth-round stoppage of previously undefeated Joe Hanks. Hanks certainly won the body building contest, but this was further proof that muscles mean little inside the ring. Ruiz is an intriguing heavyweight prospect, but he’s going to have to lose some of the flab and improve his conditioning as he prepares to take on top fighters.

Showtime’s weekend tripleheader was excellent, and I’m expecting another great card when I’m ringside at the Stub Hub Center (formerly the Home Depot Center) for Showtime Championship Boxing on Aug. 24. The headliner, Abner Mares-Jhony Gonzalez, figures to be a cracker and the co-feature between Leo Santa Cruz and Victor Terrazas should be as well.