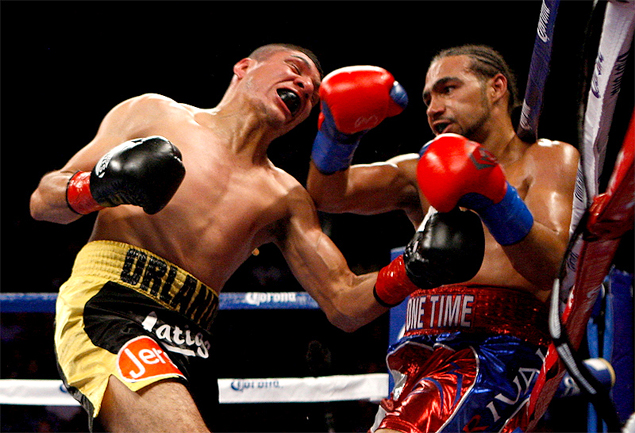 Florida welterweight Keith “One Time” Thurman has said that he anticipates “heavy missiles coming from both sides” in Saturday’s clash with Argentina’s hammer-fisted Diego Chaves as part of a Showtime-televised double-header from the AT&T Center in San Antonio.

“In reality, we plan on keeping our eyes wide open in the beginning, because a fighter like that, coming from Argentina, I’m pretty sure that he’s going to bring a lot of pride into the ring, and I’m pretty sure that he’s going to want to put on a great performance for his country and his countrymen,” said Thurman, whose streak of nine consecutive knockouts ended against Zaveck.

“Honestly, I can’t wait to see how he’s going to try to knock me out, you know what I’m saying? That’s part of the excitement in this game and in this sport. I’m definitely willing to step into that danger zone. I believe that this fight is going to be somewhat of a war. I don’t know know if it’s going to be a non-stop war, but I expect to see heavy missiles coming from both sides.”

Meanwhile, Chavez (22-0, 18 knockouts) has expressed confidence that he can come up with his sixth-straight stoppage victory against Thurman (20-0, 18 KOs), a 24-year-old from Clearwater, Fla., who is coming off a unanimous-decision rout of Jan Zaveck in March.

Chaves, 27, will be in only his second fight on American soil, with the first being a six-round unanimous decision over Edvan Dos Santos Barros at the Hard Rock Hotel in Las Vegas in March of 2010.

“My fight plan will be to take the center of the ring and don’t let him move forward,” said Chaves, whose nickname, La Joya, translates into “The Jewel” in Spanish.

“We know he can counterpunch when he is backing up. The idea is using the left hand a lot, keep him on the defensive, knowing that after the fourth or fifth round he losses steam and that’s when we’ll make him pay for his mistakes.”

RingTV.com polled 15 boxing insiders as to what they think will transpire in Thurman-Chaves.

I think this is a good match up of unbeaten welterweights with good power and underrated boxing ability. Keith Thurman’s got the edge in size, speed, power and athleticism; Chaves is the more fluid boxer and puncher and probably the better counter puncher and combination puncher.

I think Thurman will build up a points lead by sticking — with authority — and moving in the early rounds. I can see “The Thurminator” dropping his foe with a head or body shot in middle rounds, but I suspect that Chaves is as tough and game as the better-known Argentine standouts, and there’s no doubt that he’ll be in top shape for this big opportunity.

So I think he’ll survive any rough moment and press Thurman hard over the second half of the bout. If the Floridian hadn’t gone 12 rounds in his last fight, I’d worry about his stamina. However, Thurman’s early lead and knockdown will clinch a close points victory.

Keith Thurman, UD 12 Diego Chaves: Keith Thurman says he has never heard of Diego Chaves. He’s speaking for a lot of American fans. But beware. Sometimes, the biggest danger lurks in the unknown.

Chaves is trying to become Argentina’s next great fighter. But Sergio Martinez, Lucas Matthysse and Marcos Maidana struggled in the early stages of their move into the American market.

If Chaves follows the same path in only his second fight in the U.S., Thurman figures to win. Thurman is a big welterweight with power, yet went 12 rounds in beating Jan Zaveck. He’ll be cautious, yet powerful enough for a victory on the scorecards.

Keith Thurman TKO 8 Diego Chaves: Fans are right to wonder whether Keith Thurman’s reputation as a knockout artist will hold up as the quality of his opposition improves. Was his decision win over Jan Zaveck last March a “One Time” thing or a sign that Thurman’s power doesn’t have quite the same effect on top rated fighters?

Make no mistake, Diego Chaves is a solid puncher himself, and the type of tough cookie that won’t crumble easily. With the advantages in size and boxing skill going to Thurman, Chaves will have to make his opponent uncomfortable with lots of inside pressure if he wants to win.

But that’s right where Thurman needs him in order to land what he calls critical blows — bombs intended to end the fight. If Thurman remembers to work the body, the head will surely follow. Look for Thurman to stop Chaves mid-to-late, with an accumulation of punishment after scoring a knockdown or two along the
way.

Keith Thurman KO7 Diego Chaves: When a fight is made between two guys who have a combined record of forty two wins with thirty six knockouts, one considers giving the judges a night off.

But while both men can crack, Keith Thurman has proven himself against better opposition, and looks superior in terms of talent. The Florida star is clever with his feet, closes the gap quickly and whips shots in from odd angles.

He may get hurt in the contest, but I see him landing something major and dramatic somewhere around the midway point. Diego Chaves looks a bit basic and, for me, the Argentinian slugger is in over his head.

Keith Thurman TKO 8 Diego Chaves: Diego Chaves is a dangerous puncher and a good crossroads opponent for Keith Thurman, but there are flaws that dovetail into Thurman’s strengths.

First, the Argentine comes at opponents in straight lines, while Thurman has shown versatility and genuine power against guys with solid chins.

Also, Chaves’ chin must be a question mark given that he was nearly knocked out against the usually soft-hitting Omar Weis, who was past his best at the time he met Chaves.

That’s not good news against a puncher like Thurman, so the guess here is that Chaves will be at his most potent early, then will be broken down by Thurman’s superior talent and power.