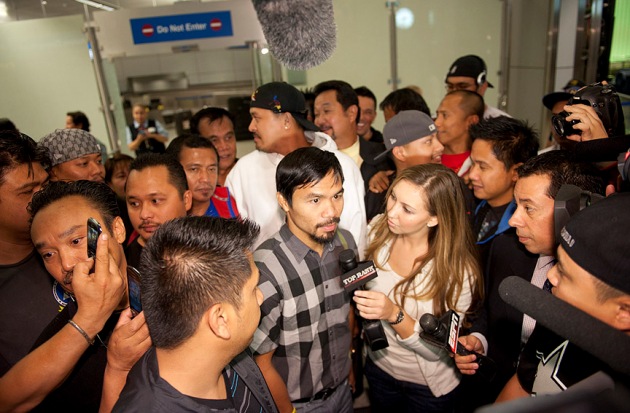 Top Rank announced on Tuesday a seven-city, international press tour in advance of the Manny Pacquiao–Brandon Rios welterweight bout scheduled for Nov. 24 in Macau, China (Nov. 23 in the western hemisphere).

The jaunt begins on Saturday, July 27 in Macau, and will have stops in Beijing and Shanghai as well as the Marina Bay Islands of Singapore before going to Bristol, Conn., New York City, and finally Los Angeles on Aug. 8.

Pacquiao (54-5-2, 38 knockouts) and Rios (31-1, 23 KOs) will be joined by their respective trainers, Freddie Roach and Robert Garcia, as well as Top Rank CEO Bob Arum over the course of a tour that is expected to cover 23,722 miles, according to a press release from Top Rank.

Pacquiao, who turns 35 in December, will face Rios in an attempt to rebound from consecutive losses, by disputed split-decision to WBO beltholder Tim Bradley and sixth-round knockout to Juan Manuel Marquez, last year.

Rios, who tuned 27 in April, is coming off a unanimous decision loss to Mike Alvarado in a rematch of Rios’ seventh-round stoppage win last October.

Roach has called Pacquiao’s fight with Rios a shot at “sweet revenge” for a November of 2010 video in which Rios and now-retired former welterweight titleholder Antonio Margarito appeared to mock Roach’s Parkinson’s disease. 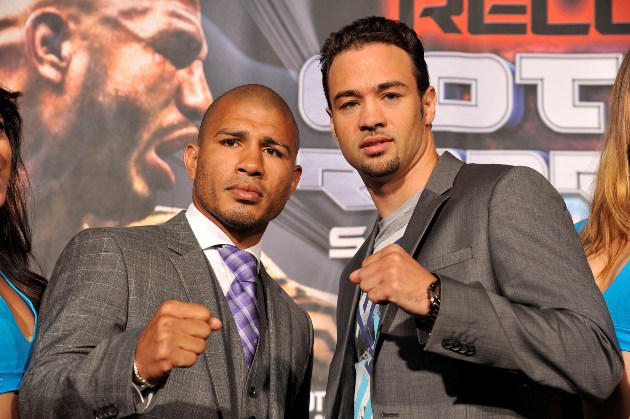 Junior middleweight contender Delvin Rodriguez appears to step up the aggression during each interview in advance of his Oct 5 clash with Miguel Cotto.

Rodriguez (28-6-3, 16 knockouts) has gone from being “very motivated,” to “ready for war,” and, finally, going “for the knockout” when he faces Cotto (37-4, 30 KOs) at the Amway Center in Orlando, Fla., site of a Tuesday’s open-to-the-public press conference announcing the event.

A 33-year-old Dominican-born resident of Danbury, Conn., Rodriguez will be after his third-straight stoppage victory against Cotto since falling to Austin Trout in June of last year.

“I’m going to go for the knockout,” said Rodriguez. “I will take advantage of the biggest opportunity of my life.”

“Miguel Cotto has participated in some of boxing’s biggest events over the past 10 years,” said Todd duBoef, president of Top Rank. “His return to the ring on October 5 will be another electrifying night for the fans watching it live in Orlando and the boxing fans throughout the world.”

“We had a tremendous training camp for this fight, and I am ready to put on a great show for all the fans on July 27,” said Berto, 29, a former two-time 147-pound beltholder who will try to rebound from November’s unanimous-decision loss to Robert Guerrero.

“My new team took me out of comfort zone, which is something that I needed. It was a very technical training camp and helped remind me who I am as a fighter and everyone will see those skills when I step into the ring on Saturday night.”

The Berto-Soto Karass card will include a welterweight bout between Keith “One Time” Thurman (20-0, 18 KOs) and hammer-fisted Diego Chaves (22-0, 18 KOs), who is in pursuit of his sixth consecutive knockout victory.

“Make sure to come out to the AT&T Center or tune in on Showtime,” said Berto. “Because it’s going to be a hell of a card.”

Scottish WBO lightweight beltholder Ricky Burns (36-2, 11 KOs) will pursue his 22nd consecutive win, his ninth stoppage victory during the run and his third consecutive knockout win against Raymundo Beltran (28-6, 17 KOs) at the Scottish Exhibition Center in Glasgow, Scotland, on Sept. 7, an event to be carried on on WealthTV and www.wealthtv.com.

Burns (35-2, 10 knockouts), 30, has a record of 8-0 in title fights, and is coming off knockouts in the fourth and ninth rounds over Kevin Mitchell and Jose A. Gonzalez in September of last year and May, respectively.