Former champ champ Emile Griffith passed away at age 75 at an extended care facility in Hempstead, Long Island, N.Y., the International Boxing Hall of Fame, which inducted him in 1990, said on Tuesday. 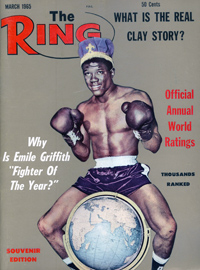 Islands native who fought out of New York, won the welterweight title three times and twice held the middleweight championship during the 1960s.

Griffith was a very popular TV fighter and an attraction in New York City, where he often fought at Madison Square Garden. He is best known for his welterweight trilogies with fellow hall of famer Luis Rodriguez and Benny “Kid” Paret and his middleweight rivalry with Nino Benvenuti.

Paret died after being knocked out in their brutal rubber match. Paret’s death, which was the subject of an award-winning 2005 documentary “Ring of Fire,” affected Griffith deeply for the remainer of his career, which is considered by many historians to be among the greatest of all time.

Griffith fought 112 times as a professional, posting an 85-24-2 record, and only losing twice by stoppage.

He faced and defeated dozens of top-10 welterweight, junior middleweight and middleweight contenders of the ’60s as well as many fighters who would one day join him in the hall of fame, including Rodriguez, Benvenuti, Carlos Monzon, Dick Tiger and Jose Napoles.

Griffith was THE RING’s Fighter of the Year in 1964. His 15-round decision loss to Benvenuti in 1967 was magazine’s Fight of the Year.

A full feature on the amazing life and career of Griffith will be posted on RingTV.com later today.