WBO super middleweight titleholder Robert Stieglitz’s 10th-round technical decision over Yuzo Kiyota on July 13 has been ruled a technical knockout after the fight video was reviewed by the German Boxing Association, whose decision was supported by WBO Presiden Paco Valcarcel. 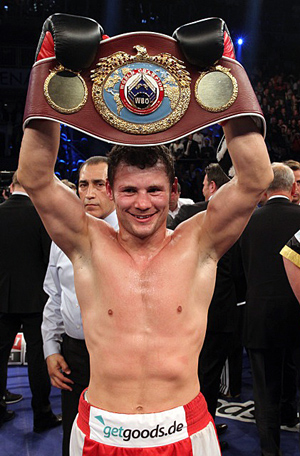 Referee Celestino Ruiz had originally ruled that a badly bleeding cut over Kiyota’s left eye was the result of an accidental clash of heads, and led to him stopping the bout with Stieglitz ahead, 100-89, once, and, 99-90, twice.

But Valcarcel said that the German Boxing Association’s examination of the video determined that the injury to Kiyota had been caused by a punch.

“It was a technical decision before because the referee made a mistake. He decided that it was a head butt, but then, Stieglitz’s camp filed a protest with the German federation,” said Valcarcel.

“The German federation watched the tape of the fight, which was in Germany. After the review, the German federation, through consultation with the WBO, we reversed the decision and decided that it was a TKO, because it was very clear that the cut was the result of a punch.”

The win represents the third straight stoppage victory for Stieglitz, including a fourth-round knockout of ex-beltholder Arthur Abraham in March that avenged a unanimous decision setback in August of last year.
Lem Satterfield can be reached at [email protected]