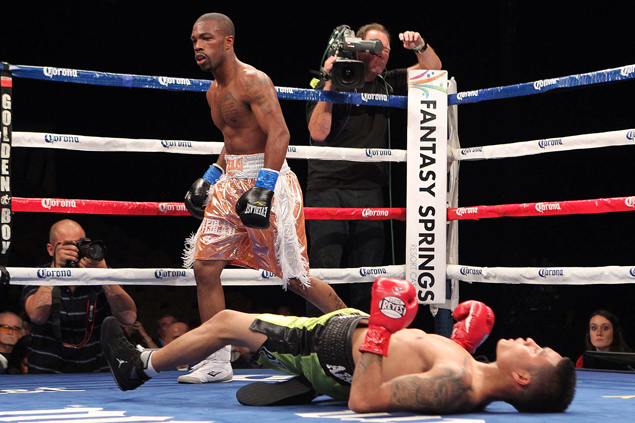 Unbeaten featherweight prospect Gary Russell Jr. told RingTV.com he’s looking to return to the ring on the Aug. 9 undercard of a heavyweight bout between Deontay Wilder and Sergei Liakhovich that will be televised on Showtime from The Fantasy Springs Resort and Casino in Indio, Calif.

Russell (22-0, 13 knockouts) suffered a hairline fracture in his left hand in his last bout, a unanimous decision over Vyacheslav Gusev in March. The injury is reportedly healing well.

Golden Boy CEO Richard Schaefer could not be reached for an immediate comment, although Russell said he was informed of the possibility by advisor Al Haymon.

“We’re supposed to be going on Aug. 9 against a guy named Juan Ruiz in California. We’ve known about it for about three weeks. This is perfect. I’m right on schedule. Right on plan. My hand is doing okay. It’s doing alright,” said Russell.

“Of course, we’re doing all of our training and bag work and everything in 20-ounce gloves, so we’ll see what difference it will make when we have to go down to the eight-ounce gloves and start hitting guys upside of the head.”

Russell, 25, said that he would like to pursue the winner of an Oct. 12 bout between Puerto Rico’s Orlando Cruz and Mexico’s Orlando Salido for the WBO’s vacant belt.

“We already have a plan scheduled. That vacant belt that Mikey Garcia has lost [at the scales,] we’re supposed to be actually competing for that belt. So, what’s going to happen is, I’m going to fight this tuneup right here, and Orlando Cruz and Orlando Salido are going to fight for the vacant WBO belt. I’m ranked No. 2 in the WBO, so I was already the mandatory to fight for that belt anyway,” said Russell.

“But instead of fighting for it immediately, I wanted to take a tuneup just to see how my hand would hold up since I broke my hand in my last fight. So I wanted to take a tuneup fight. Nothing major, Just something to test the hand out. Something really light, just to see how the hand held up. We’ve got plans, so we’re already locked in as far as what we want to do, and we’ve got tunnel vision on what that is.”

After facing the Cruz-Salido winner, Russell said he would then perhaps pursue titleholder Abner Mares, with whom he has recently engaged in an online dialogue. Russell has said that it would “be so easy” to defeat Mares, who responded that Russell “hasn’t fought any A-level fighters.”

“We’re not tripping off of Abner Mares, for the simple fact that this is business…Golden Boy has Abner Mares, and they’ve already offered me the fight with Abner Mares if I want it. I don’t have to be a mandatory,” said Russell, who also works with Golden Boy through Haymon.

Mares (26-0-1, 14 KOs) is scheduled for an Aug. 24 defense against former beltholder Jhonny Gonzalez, who was dethroned as WBC beltholder via technical decision by Daniel Ponce de Leon in September of last year. In May, Mares earned the title by stopping Ponce de Leon in the ninth round.

“There was a big rumor about me potentially fighting Daniel Ponce de Leon, and that the fight was offered, but that’s complete bulls–t. I never once talked to them people,” said Russell.

“It’s a waste of my time to fight Ponce de Leon. For what reason? What is there to gain? He has no title, and he’s just coming off of a loss. There is nothing to gain fighting him. It’s pointless.”