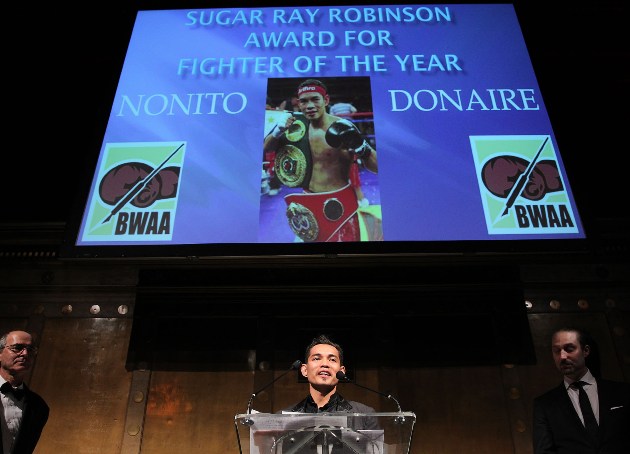 Former RING junior featherweight champion Nonito Donaire said he is targeting a return to the ring and an attempt to, yet again, make the 122-pound limit, but if unable to, he will rise into the featherweight ranks, according to an on-camera interview with ESPN’s Bernardo Osuna, on Friday.

In his last fight in April, Donaire (31-2, 20 knockouts) was dethroned as RING 122-pound champion and WBO beltholder by Guillermo Rigondeaux, who also holds the WBA title.

On Wednesday, Top Rank CEO Bob Arum informed RingTV.com that he is trying to work out a rematch between Donaire and Vic Darchynian for November that would happen as 122-pounders, according to Arum.

A 37-year-old southpaw, Darchinyan (39-5-1, 28 KOs) has won two straight since falling in consecutive unanimous decision losses to Anselmo Moreno and Shinsuke Yamanaka, and is coming off a fourth-round stoppage win over Javier Gallo in May.

Donaire said he will train at the gym of his trainer, Robert Garcia, in Oxnard, Calif., rather than his usual venue, the Undisputed Gym, in San Carlos, Calif.

“I’ve been training at the Undisputed [Gym] for a long time, so I love Undisputed, but I think that a different approach would be in Oxnard,” said Donaire. “I haven’t tried that, and my respect is how great Robert is, and I think that I’m going to try something like that for the next one as well.”

After losing to Rigondeaux, Donaire had arthroscopic surgery performed on his right shoulder by Dr. Shabi Kahn on April 19, at Seton Medical Center in Daly City, Calif., to repair two tears.

Donaire and his wife, Rachel Donaire, are expecting the birth of their son and first child, Jarel Michael, on July 21.