It hasn’t been an easy road for Salinas, Calif. junior lightweight Alejandro Perez, who is wrapping up his tenth year as a professional fighter at the age of 27. Finally, it feels as though the young fighter has a bit of stability after signing with Top Rank just last month.

Perez headlines Saturday’s UniMas Solo Boxeo card against Edgar Riovalle in a bout that can largely be considered a showcase fight, something Perez hasn’t been the benefactor of many times over his 21-fight career. The fight headlines a card at the Hollywood Park Casino in Inglewood, Calif.

This will actually be Perez’s second go-around with Top Rank, having more or less began his career with the company before suffering a shock decision loss to journeyman Adolfo Landeros in June of 2008.

That defeat derailed Perez a bit, while at the same time ending his relationship with the company. This forced Perez to navigate the tough sport of boxing pretty much on his own. For the situation he was presented, Perez has managed to become a solid gatekeeper, but with Top Rank, he hopes to become more than that.

It isn’t totally out of the question. Look what the promotional company has done with Raymundo Beltran, a fighter with a similar career trajectory to Lopez’s. Beltran has quite a few more losses than Perez but in a short amount of time with Top Rank has managed to land a 135-pound title shot against Ricky Burns in September. 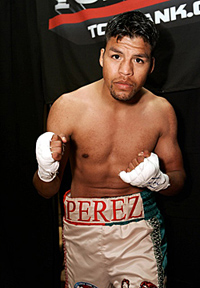 “Top Rank is a great promotion to work with and I feel really comfortable with the,” Perez told RingTV.com.

“I’m sure that as long as I keep winning fights [the way Beltran has], they will soon get me a big title shot. That is something we’ve been looking forward to a long time.”

When asked about his prior relationship with Top Rank, Perez, as always, kept it classy.

“Yeah, I was with Top Rank at one point in the beginning of my career,” said Perez. “Unfortunately, things didn’t work out one way or another, so we broke off for awhile. No hard feelings, it just didn’t work out. Now we are back and feel really good with them.”

While on his own, Perez never said no to a fight. This meant sometimes taking fights at weights where he was not his most effective.

Against Rico Ramos in November 2009, it was set at the junior featherweight limit of 122 pounds.

“I’ll be honest, I couldn’t make 122 pounds anymore,” recalled Perez. “I had a lot of trouble making the weight. I didn’t even make the weight. I was very dehydrated for that fight. I came in two-and-a-half pounds over the limit, that’s how bad it was.”

The result was a less than his best Perez, who largely was outclassed by the slick Ramos over their eight-round bout. That fight is also the only time Perez has been on the canvas.

A 16-month inactive period followed the loss to Ramos, but it wasn’t because Perez didn’t want to fight. In fact, he accepted everything that was thrown his way, but the fights just kept falling out. Somehow, Perez maintained focus and composure and hoped something better would come along.

In March 2011, Perez was supposed to meet unbeaten featherweight prospect Ronny Rios on ESPN2’s Friday Night Fights. Days before the fight, Rios pulled out, leaving Perez without a dance partner yet again.

“It was very disappointing, but then again, this is the boxing business,” said Perez in a 15rounds.com piece by Mario Ortega Jr. “It happens once, it happens twice. It wasn’t the first time and it won’t be the last.”

Luckily, something better did come along for Perez, as Antonio Escalante was available for a fight in Fairfield, Calif. as the main event of a Telefutura Solo Boxeo bout just a week later.

Escalante had world rankings in a few of the major sanctioning bodies and was still considered a solid name, despite coming off a tough loss. Perez was decidedly the underdog, but went into that fight with a winning mentality.

The result was a brutal, highlight-reel knockout of Escalante in the first round. It was the kind of victory that can catapult a fighter into a major opportunity. Unfortunately for Perez, due to going his own, a call didn’t come for a major fight.

“It was definitely a letdown after having knocked out Escalante to not get the opportunity for a big fight,” admitted Perez. “Unfortunately, that is the way boxing works. Furthermore, I’m just staying focused and looking forward to working with my new promoter, whom I know will get me the right fights to make a name for myself.”

It’s true, had Perez been with Top Rank or another major promoter at the time of the Escalante win, it is very likely it could have been parlayed into a more meaningful fight than the one he got, a ShoBox main event against unbeaten but largely untested Diego Magdaleno, at 130 pounds.

It was a decent opportunity for Perez. Yet it was a situation that, had he won, most people would have just written off Magdaleno as a serious prospect rather than give Perez credit for a good win. Perez dropped Magdaleno in the first round, no doubt giving flashbacks from his previous performance. Magdaleno was able to rally and largely shut Perez out the remaining distance. 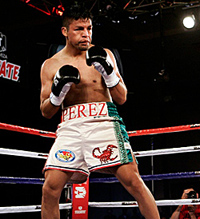 Perez would only fight once in 2012 and has fought once so far this year. His win over Derrick Wilson last year was exciting, as he put his opponent on the canvas four times en route to a stoppage in the eighth.

Against unbeaten Art Hovhannisyan, Perez outworked his opponent and won a decision against the house fighter. Now it is Perez who gets to play the role of the house fighter, for once in his career.

“I’ve been boxing for a total of 18 long years, almost ten as a professional,” said Perez. “All the experience I’ve gotten through the years has been immense. One of the main things for me is to not get nervous coming into the fight, as well as staying extremely focused and concentrated on my fight.”

Perez has largely campaigned at 130 pounds, but Top Rank indicated when they signed him that they thought of him as a featherweight.

“I feel really good at 130 pounds,” said Perez. “However, I can still make 126. After this fight, depending on how I feel, my promoter and I will have a chat and see what they think is best for me.”

When asked if there was anyone in particular he’d like to target after this weekend, Perez made it clear that isn’t him.

“I’m not one to really choose who to fight,” said Perez. “I’ve always said I’m a professional boxer, that’s my career. Whomever I’m faced against, I’ll make sure to be ready and prepared to fight.”

Perhaps this mentality is what held him back a bit earlier in his career. Often, it is those who are easier to handle that get run over in the boxing business. Perez doesn’t feel that it has hurt him much, mostly because he has never really been in the position to choose his opponent.

“I know that there are fighters out there that choose their opponents, in my case, it has never been this way. So it has gotten me just to take whatever fight or opponent is next for me to face and to be 100% prepared for said opponent.”

With Top Rank’s top-notch matchmakers Bruce Trampler and Brad Goodman navigating Perez’s career, there are definitely many worse positions to be in with this mentality. One could argue nobody has built more world champions than those two guys put together, especially in recent years.

It is unclear what the long-term plan is for Perez moving forward, but he is in a much better place now than he has been the past few years. Ten years worth of experience can definitely pay dividends if the right opportunity comes along.

Mark Ortega is a contributing writer for RingTV.com. He can be emailed at [email protected]. Follow him on Twitter @MarkEOrtega