Han fights for respect in a new discipline 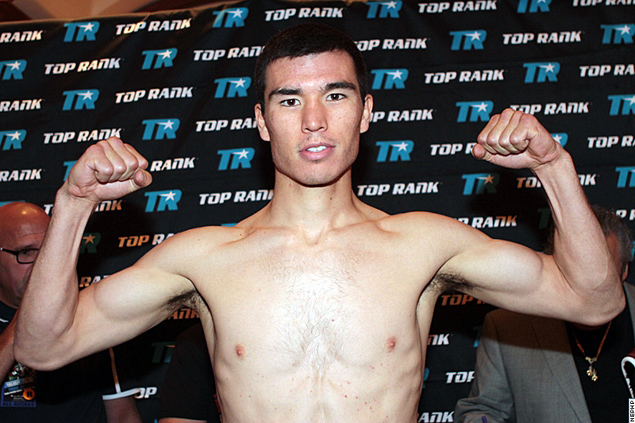 Abie Han has been competing for attention his entire life.

The 28 year old is one of five fighting siblings, all of whom are decorated in disciplines ranging from boxing to taekwondo. It took a whole lot of hardware to be impressive in the Han household.

So it’s only fitting that Han would wind up in the situation he’s in now as a professional boxer, fighting for the attention of his promoter against a stable mate.

Han will face off against fellow junior middleweight prospect Glen Tapia tonight in the co-feature of ESPN2’s Friday Night Fights telecast. The two are both in the Top Rank family, but according to Han, someone’s playing favorites. 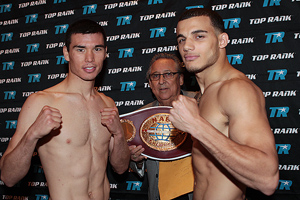 Indeed, a perusal through the annals of YouTube yields only cell phone footage of a recent Han bout seemingly shot from the bleachers, and images of him teaching martial arts classes at his father’s gym in El Paso, Texas.

Apparently the general public aren’t the only ones wondering what he looks like in the ring, though.

“You can’t put one of my fights on YouTube?” vented Han. “Not only that, I can’t even get a copy of one of my fights. I’ve been with Top Rank for over three years now, and they can’t get me one copy of my tapes. I know Top Rank has their priorities; they have to take care of their fighters. He’s the Jersey boy, he’s the younger, he’s the fresher fighter. I’m in El Paso, Texas. Who knows where that’s at? But hopefully I can make a statement in this fight that I deserve a little more publicity.”

In team sports parlance, Tapia is the equivalent of a first-round draft pick. A can’t miss, blue chipper who racked up an amateur record of 130-13 with a “pro-ready” style before he ever shed the headgear. Han, meanwhile, would be a late round flier, a project with raw tools and an upside that might notÔÇöbut couldÔÇöbe realized.

Han claims his record as an amateur boxer was right around .500.

“There’s nothing spectacular about me,” he says. Boxing didn’t come as naturally to him as it did for his sister Jennifer, now also a professional, who would routinely pound him in sparring as a youngster.

But whether he was always a good boxer or not, he’s always been one heck of a fighter. He holds black belts in taekwondo, hapki do and hoi jeon moo sool, and collected another trio of belts as a world kickboxing champion from 2004 to 2006.

“I was the man in kickboxing. I was killing everyone, destroying guys,” boasted Han in a rare deviance from bashfulness about his abilities.

Unfortunately, obscure Korean martial arts don’t line anyone’s pockets, and Chuck Norris’ World Combat League Han was a part of wasn’t quite as successful as his meme. Thankfully, there was a world champion and a world-class trainer an hour away in Las Cruces, New Mexico to help him hone what might have been his fifth best fighting discipline.

Han forgot any plans of trying MMA and dedicated himself solely to the sport of boxing under the guidance of Louie Burke. As developed as he was in other forms of combat, he needed to work on the very basics when it came to simply using his hands. His guard was too wide, his defense porous, and he needed to adjust to focusing on his opponent’s chest, rather than assessing his foe from the ground up.

Burke’s prize pupil, Austin Trout, quickly showed the new kid what it would take to become elite in the squared circle.

“He beat me up pretty bad. But he taught me to correct my bad habits. Kickboxing is a great sport, but you create such bad habits for the sport of boxing. I had to develop my defense, I had to learn how to break opponents down, establish a jab. This was alien to me. They’ve molded to where I feel I’m a pretty good boxer,” said Han.

His record suggests that he is, but his toughest test has sadly been against professional Top Rank cannon fodder Brandon Baue. Han laments his lack of competition as of yet, but Tapia will surely provide the test he’s been craving.

The transition from elite kickboxer to elite pugilist isn’t one that is made successfully too often. However, Han’s path closely follows that of one of the major exceptions. Troy DorseyÔÇöalso a TexanÔÇöwas a karate and taekwondo practitioner, and a kickboxing world champion before winning the IBF featherweight title in 1989.

When Dorsey’s name is brought up, there’s a clear reverence in Han’s voice.

Before we can find out if he can be in Dorsey’s league, we’ll find out how he fares in Tapia’s sport.

Corey Erdman is a staff writer for RingTV.com, a host at Fight Network in Canada, and a regular commentator for WealthTV. He is a full member of the Boxing Writers Association of America. Follow him on Twitter @corey_erdman.