Sad news broke over the weekend as entertaining Melrose Park, Ill., club fighter Lenny LaPaglia passed away Saturday in his home in Illinois at the age of 53 from a heart attack.

Though LaPaglia didn’t possess championship credentials, he certainly had championship caliber heart. LaPaglia compiled a record of 36-9 with 33 KOs, retiring after a 1995 knockout loss to Thomas Hearns in Detroit.

LaPaglia participated in a great number of wars in the ring, none more memorable than his July 14, 1988 clash with St. Louis light heavyweight Art Jimmerson at the Felt Forum (now the Theater at Madison Square Garden) in New York City. The fight will have taken place 25 years ago next week.

“I remember having a seven-fight win streak at the time I was offered the fight,” recalled Jimmerson.

“I had only gone 10 rounds for the first time in my last fight. Without having the proper management, I saw myself getting pushed a lot in these type of situations where I took a fight on short notice because I needed the money.

“There was no YouTube or Google back then, so I had to go on word-of-mouth and research boxing articles on who Lenny LaPaglia was. ‘Wow, this dude was a killer!’ I thought, once I heard about his career. The only positive going for me was I had beaten a guy, Danny Blake, who had knocked Lenny out in the past.”

Though the fight itself was action-packed, Jimmerson had an interesting and funny story to share about running into LaPaglia before the fight.

“Arriving at JFK in New York for the first time, I thought, ‘Wow, we’re in the big time now!'” said Jimmerson. “Fighting at the Garden was like being on the moon.

“Can you believe that after getting settled and enjoying the sights, we ran into LaPaglia and his rat pack? These guys were all mean! I mean they all looked greasy and dirty, even after taking showers, it was in their blood.

“Once Lenny found out he was fighting me, he said, ‘We don’t need a boxing ring, punk, we can fight right here!’ I was like, ‘Hey man, this dude is crazy!'”

Jimmerson was just 9-2 with five knockouts at the time he met LaPaglia, who was much more experienced at 31-5. LaPaglia had also relocated to New York from Illinois, making him the house favorite heading in.

“At the press conference before the fight, Lenny had dedicated the fight to his trainer or manager, who was locked up. He had just knocked out Zorra Folley’s son, who was a decent boxer. Lenny had some good boxers on his resume that he just destroyed. I didn’t know, but he was knocking out guys in the gym with 16 ounce gloves on. His exact words were, ‘You’ll have to kill me in order for me to lose this fight.'”

Though neither guy was considered to have a high ceiling, the fight itself featured some of the best body punching you’ll ever see.

In the first round, LaPaglia got started quickly with some Micky Ward-esque left hooks to the body. To his credit, Jimmerson landed some solid body shots of his own, and it was a phone booth fight from the start.

With 25 seconds left in the first, LaPaglia dug a really big shot to Jimmerson’s midsection, nearly doubling him over.

“Lenny was a converted southpaw, that is why his left hook was so dangerous,” said Jimmerson. “He almost broke my rib in the first round. Praise the Lord, I was in great shape.”

LaPaglia would hurt Jimmerson again in the second, but Jimmerson’s recuperative powers were top notch and he usually managed to answer back with solid shots of his own.

Jimmerson started getting the better of the exchanges in the third round, as it seemed as though LaPaglia had perhaps punched himself out.

“To be honestly fair to Lenny, I think he really underestimated me,” admitted Jimmerson.

“He mentioned in the post-fight press conference that with him moving around so much from place to place, trying to get settled, he wasn’t able to train like he should have.”

With about a minute left in the third, Jimmerson landed a good combination with LaPaglia against the ropes. What was LaPaglia’s response? To put his gloves by his sides and willingly eat more power shots from Jimmerson.

During a see-saw fourth round that saw both guys hurt, LaPaglia again dropped his guard purposefully with about a minute left, eating more shots to the shock of the MSG Network announcers, Randy Gordon and Sam Rosen.

In the fifth round, LaPaglia again dropped his arms, this time eating a bevy of power shots for at least 10 seconds. The combination ended with three straight left hooks to LaPaglia’s ribcage, putting him down for a nine count.

After LaPaglia made it to his feet, he somehow rallied with his own offense, landing some flush shots that backed off Jimmerson for a second.

With about 30 seconds left, LaPaglia backed into the ropes with his guard down again, taking more body shots that would send him down a second time. LaPaglia made it to the bell.

“I remember the fight, very strange fifth round,” said Gordon when reached by RingTV.com.

“LaPaglia later told me he had punched himself out and was trying to get Jimmerson to do the same. However, instead of blocking the punches with his arms, LaPaglia kept his arms down and allowed Art to smack him again and again in the face. I have seen thousands of fights, never one like that.”

LaPaglia had not recovered from the previous round’s punishment, and was again dropped in the sixth, this time falling between the ropes onto his backside before the referee called the fight off.

While it wasn’t the kind of performance you would show a young boxer in terms of what one should do in the ring, it was a tremendous display of heart on the part of both fighters.

Throughout his career, LaPaglia held the distinction of a guy who loved to fight. He was a fighter at heart, and it was often his heart that kept him in many fights when the level of competition improved. 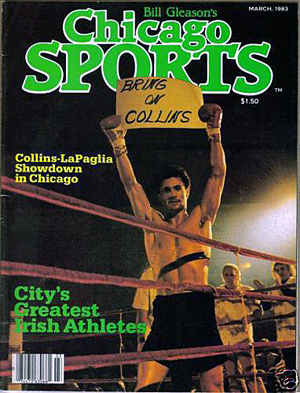 RingTV.com contributor and CompuBox statistician Lee Groves included the LaPaglia-Jimmerson fight in his terrific book, “Tales from the Vault: A Celebration of 100 Boxing Closet Classics,” which was a compilation of 100 tremendous fights.

“I recall the terrific buildup to LaPaglia’s turf war with John Collins, and the mental picture I have of Lenny is one of power, strength, and fire,” remarked Groves, a noted fight collector and historian.

“He didn’t have the greatest talent, but he was aggressive, hard-hitting, and put forth whatever he had without reservation. A fan can’t ask for much more than that.”

LaPaglia’s nickname was “The Rage,” and he undoubtedly brought a lot of it into the ring, participating in a fair number of action-packed slugfests in a career he can be proud of.

Perhaps none knew this intensity better than Jimmerson, who waged six hellacious rounds with him a quarter century ago.

“Lenny was a true fighter in the sense of old school,” said Jimmerson. “My condolences to his family. I saw him on Facebook and he gave me the most incredible compliment, saying I had the biggest heart.”

It took two to make that night at the Felt Forum a memorable one for those that were in attendance, and those that get to enjoy the fight all these years later. LaPaglia can be proud of that.