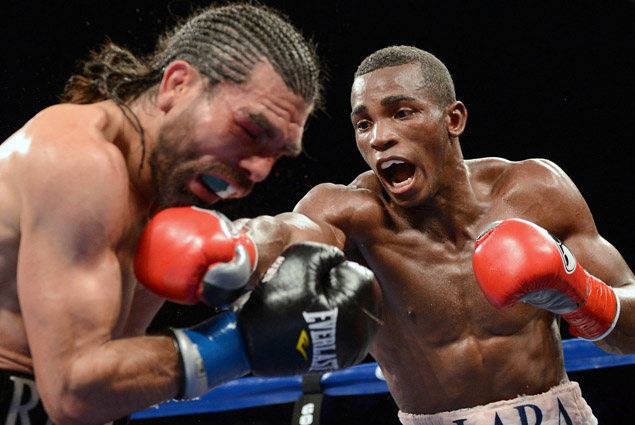 Junior middleweight Austin Trout is interested in a fight with fellow southpaw and 154-pound contender Erislandy Lara, whose manager, Luis DeCubas Jr., said his fighter would invite the challenge.

Lara (18-1-2, 12 knockouts) rose from knockdowns in the fourth and ninth rounds to score a 10th-round stoppage of Alfredo Angulo last month.

With Alvarez facing Floyd Mayweather Jr. on Sept. 14, DeCubas believes Trout-Lara to be a natural.

“To be honest with you, style-wise, it’s two southpaws,” said DeCubas, “but when you look at it, Floyd Mayweather and Canelo are fighting, and the two other guys best guys in the division are Lara and Trout, you know? If he wants to fight Lara, why not do Lara-Trout?”

Trout and Lara are both advised by Al Haymon.

“If they’ll pay for it, I’m with it,” said Trout. “I want to get back to a title shot, so if it looks like it’s going to mean going through Lara, then so be it. Al Haymon is the management. I’m going to talk to him tomorrow, and we’ll see if he can get me the best fight. So, of course, there’s Lara. I would like to get that interim strap that would put me right back in there.

“I’m trying to come back in September. I would love to be on the Mayweather card… to keep my face and my name around those people. I was told that they’re trying to looking at the winner of the IBF title fight between Ishe Smith and Carlos Molina, but I’m not trying to wait for that. I want to be right back in there with the top names. Whoever I have to beat to get there, that’s what I want to do.”