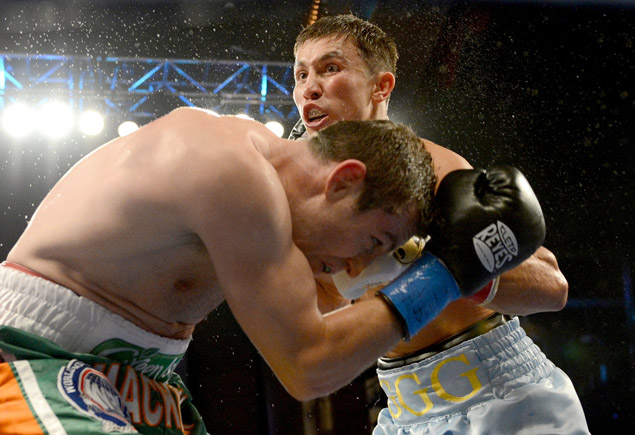 There were some impressive performances (Gennady Golovkin’s third-round KO of fellow RING-rated middleweight Matthew Macklin) and some not-so-impressive showings (super middleweight contender Thomas Oosthuizen’s split-draw with unrated Brandon Gonzales) this past Saturday, which caused a few changes in THE RING’s divisional rankings.

At super middleweight, Oosthuizen may have just had an off night, especially in the early rounds of his disputed split draw over Gonzalez, but the 25-year-old South African contender wasn’t impressive since little was expected of the unrated Californian. Oosthuizen moves down to No. 7 in the ratings with Arthur Abraham and George Groves moving up one spot each to No. 5 and No. 6, respectively.

Paul Smith stopped Tony Dodson for the second time, this time earlier, in the sixth round. Smith is solid but is not top-10 material yet in a very strong weight class.

Not much more to say about Golovkin than has already been said. “GGG” easily dispatched Macklin with a body shot in the third. Golovkin moves to No. 1 in the middleweight ratings with Macklin flip flopping with Martin Murray. The new middleweight line-up is as follows: Champion: Sergio Martinez; 1. Golovkin ; 2. Geale; 3. Sturm; 4. Quillin; 5. Chavez, Jr.; 6. Murray; 7. Macklin; 8. N’Dam; 9. Barker; 10. Vera.

At junior middleweight, Willie Nelson barely eked out a decision over Luciano Cuello, who wasn’t expected to give the once-beaten Ohioan a tough fight but he did give Nelson fits. Nelson will remain at No. 10 until someone outside of the ratings does something impressive to take it from him.

At lightweight, Gavin Rees lost a majority decision to Anthony Crolla. Reese is dropped from the ratings with everyone below him moving up one spot. Entering at No. 10 is Terrence Crawford.

At junior featherweight, Scott Quigg scored a third-round stoppage over William Prado in his first bout since his moving to Matchroom Promotions. No changes.

At junior bantamweight, Jose Salgado had a solid fifth round stoppage over Toyoto Shiraishi. No changes.

At flyweight, our No. 3-rated junior flyweight Moises Fuentes stayed busy with a points win over Gerardo Verde. No changes.

At strawweight, No. 1-rated Denver Cuello lost a majority decision to unranked Xiong Zhao Zhong. Cuello fought one handed for much of the bout due to an injured shoulder, but the ratings change: 1. Menayothin; 2. Budler; 3. Joyi; 4. Xiong Zhao Zhong; 5. Cuello; 6. Takayama; 7. Miuazaki; 8. Rodriguez; 9. Buitrago; 10. Silvestre (with Sabillo dropping out of the ratings).

Chuck Giampa is the Chairman of THE RING Ratings Committee. He can be emailed at [email protected]