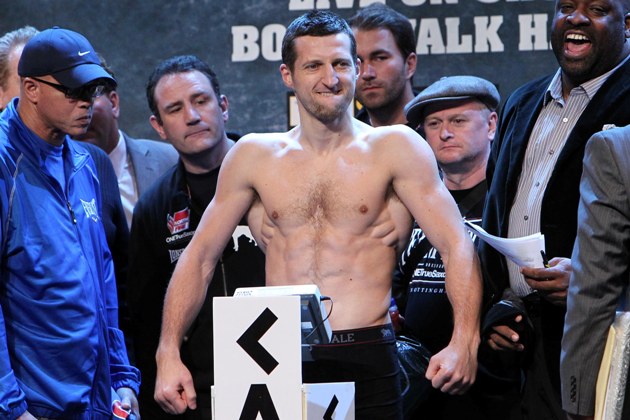 Promoter Eddie Hearn of Matchroom Sport has informed RingTV.com that talks have begun for an IBF-mandated all-British super middleweight clash between titleholder Carl “The Cobra” Froch and unbeaten George “Saint” Groves that could happen later this year.

THE RING’s No. 1-rated 168 pounder, Froch (31-2, 22 knockouts), who turned 36 on July 2, is coming off May’s unanimous decision over Mikkel Kessler in a rematch of their 2010 bout when Kessler unanimously decisioned Froch as part of Showtime’s Super Six World Boxing Classic.

“We are in talks regarding a potential blockbuster domestic fight later this year,” said Hearn, who promotes Froch and Groves. “Both fighters have plenty of options, and although it’s a fight we originally envisioned for next summer, if it makes sense for both fighters, neither has a problem with making it happen.”

Since falling to RING super middleweight champion Andre Ward (26-0, 14 KOs) by unanimous decision in December of 2011 in their bout for the bout for THE RING, WBA and WBC belts, Froch has won three straight fights, two of them by knockout.

Froch had earned consecutive stoppage victories over Philadelphia’s Yusaf Mack in the third round and previously unbeaten IBF beltholder Lucian Bute in the fifth in May and November of 2012 prior to facing Kessler.

An announcement will be made next week regarding future plans for Froch and Grove, according to Hearn.