Mayweather may fight beyond 49-0 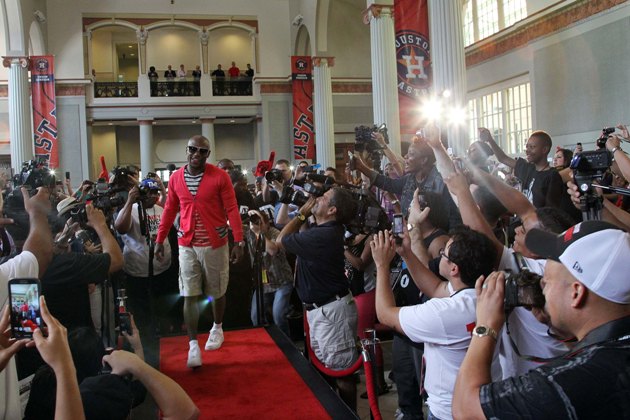 As Floyd Mayweather Jr. and Mexican star Saul “Canelo” Alvarez participated in Monday’s promotional press conferences in Houston and San Antonio news emerged that Mayweather could fight more than the six times indicated by the projected $250,000 million contract he signed with Showtime and its parent company, CBS Corporation, in February.

Coming off May’s unanimous decision victory over Robert Guerrero for THE RING’s welterweight championship, Mayweather (44-0, 26 knockouts), also THE RING’s No. 1 fighter pound-for-pound, said he might compete long after facing Alvarez (42-0-1, 30 KOs) on Sept. 14 on Showtime Pay Per View from the MGM Grand in Las Vegas.

Mayweather and Alvarez were greeted by more than 1,000 fans in the packed Grand Lobby of Union Station at Minute Maid Park, home of the Houston Astros, and by a crowd of about 5,000 at The Alamo in San Antonio. The two stops in Texas were the eighth and ninth in a 10-city tour that will end on Tuesday at Nokia Plaza’s LA Live in Los Angeles. 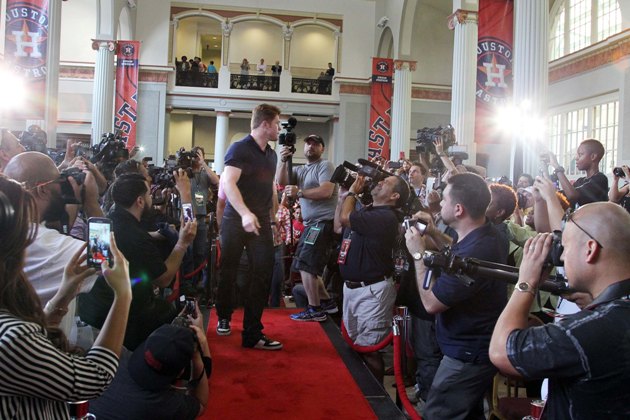 “There is no city like San Antonio. You fans have been brilliant over the years,” said Mayweather, who will defend the WBA 154-pound belt he won by unanimous decision over Miguel Cotto last May on the line against Alvarez.

“Without San Antonio, Floyd Mayweather wouldn’t be where he’s at today. If you don’t know, Mayweather loves Mexico. Mexican and Latino fans, you know boxing. I’m going to sign a lot of autographs and take a lot of pictures because I’m late. That’s the least I can do for you guys.”

Alvarez, who turns 23 on July 18, was last in San Antonio for the biggest victory of his career in his last fight, a unanimous decision over previously unbeaten Austin Trout in April at The Alamodome.

“Thank you everybody for being here. It’s a great honor for me to be here for a second time,” said Alvarez. “Last time I was treated like I was at home and that’s what I feel like again – like I’m at home.”

Alvarez took a shot at Mayweather for apparently being late. 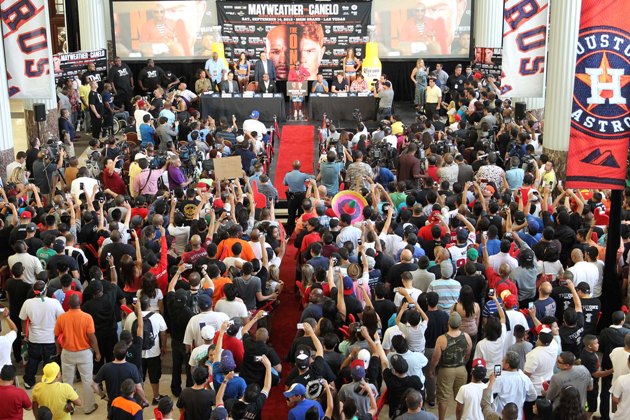 “I know many of you have been here since seven in the morning. At six o’clock, the press conference was supposed to start, and that’s why I’m here at six o’clock. Because I respect you, because you guys respect boxing,” said Alvarez.

“There are Mayweather fans here who also have been here since very early. I’m here for them too. He [Mayweather] thinks all the boxers have to respect him and he intimidates everybody, but he doesn’t intimidate me. I look forward to the fight.”