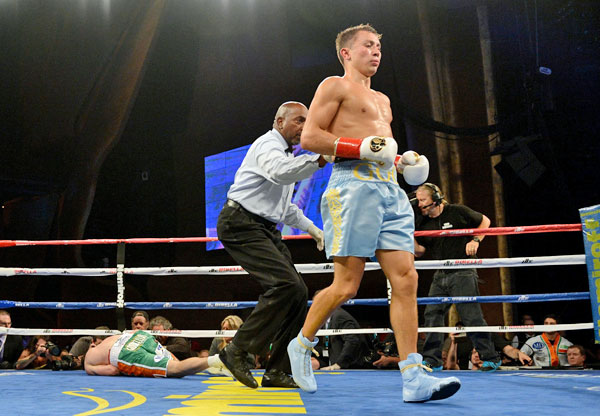 If this was supposed to be a showcase for the power, precision and destructive force of middleweight Gennady Golovkin, then mission accomplished. Golovkin crushed Matthew Macklin with a devastating KO victory, which came on a wicked shot to the liver at 1:22 of the third round, to defend the WBA middleweight title at the MGM Grand Theater at Foxwoods on Saturday night.

The shot, which sounded like it was fired from a pistol, landed on Macklin’s side and he quickly crumpled to the canvas, rolling over on his stomach where he was counted out by referee Eddie Cotton. Macklin (29-5, 20 KOs) was paralyzed by the shot and grimaced in agony as he was unable to beat the count.

“It was an easy fight for me. He never hurt me. I felt great in the ring,” Golovkin said. “I want to fight as soon as possible, any top fighter, any champion, any belt holder, anywhere.”

There is a long list of middleweights that Golovkin can fight, but the question now becomes who wants to step in the ring against him. At this point there seems to be very little reward and a whole lot of risk for fighting a heavy-handed middleweight who can knock you out with either hand or stop you with a body shot. 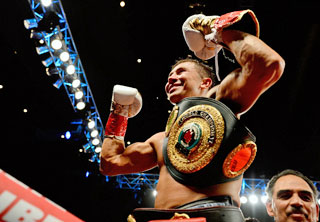 Golovkin (27-0, 24 KOs) has quickly crept up on Sergio Martinez, who earned his position as the top middleweight in the sport with victories over Kelly Pavlik and Paul Williams. But Martinez, who is recovering from knee and hand injuries, has been in some tough matches of late, including against Macklin and Julio Cesar Chavez, Jr. There is still the desire to see Golovkin fight an elite middleweight.

Andre Ward, the 168-pound champion who worked the fight as an HBO analyst, said no one should be so quick to put Golovkin ahead of Martinez as the top middleweight in the game. He rates Golovkin as one of the top three middleweights in the sport, based on his boxing ability and the fact that he is always in position to land the heavy shots. Ward said that is due to Golovkin’s 355 amateur fights under the old Soviet system.

“Until somebody is able to dominate Martinez, he’s in that top spot. He holds onto that top spot,” Ward said. “I don’t know what’s going on with the negotiations behind the scenes with Golovkin. They say that nobody wants to fight him. He’s doing this (knocking out guys), but not doing this with the top competition. I’ll keep Martinez in the top spot. I’d like to see Golovkin against a young fighter like Kid Chocolate (Peter Quillen). If he can do that against a fighter like that you can say he’s a top spot.”

It would be a natural for Golovkin to take on Martinez to prove who the better man at 160 pounds is. But Lou DiBella, Martinez’s promoter, said fans shouldn’t count on seeing that anytime soon.

DiBella had just stepped from the ring where Golovkin had destroyed Macklin in a shorter period of time than it took Martinez to put away the middleweight from Birmingham.

Macklin was never in the fight. He seemed to get hurt with everything that Golovkin landed. Golovkin stalked Macklin with the detached coldness of an assassin. Buddy McGirt, Macklin’s trainer, kept imploring Macklin to move to the right, circling away from Golovkin’s power. It may have been the right strategy, but it wasn’t very helpful. Golovkin opened a nasty cut above Macklin’s left eye in the second round. That was the beginning of the end.

“He’s the best I ever fought. He never let me get started. It was a great shot he landed, the left to the liver. That’s my favorite shot,” Macklin said. “He has clubbing solid power and you can feel the weight of every punch he throws.”

Tom Loeffler, Golovkin’s promoter at K2 Promotions, said he was surprised at how quickly Golovkin KO’ed Macklin, who is noted for his durability.

“It showed that he (Golovkin) could not only knock out somebody with a head shot, but he could do it with a body shot,” Loeffler said. “We expected the fight against (Gabe) Rosado would be a much sharper fight, but he was sick with the flu. This shows that he’s the best middleweight in the game.

Loeffler said they expect Golovkin to get back in the ring in August or September. He barely worked up a sweat and he wasn’t hurt in his match against Macklin so that shouldn’t be a problem. Finding a suitable opponent could be.

Ward says that he and Golovkin could meet in the future.

“He’s a great fighter. I don’t think they want it right now,” Ward said. “But the public is going to demand it. If I’m at 168 pounds in the next year, we’ll see. I’m not ducking and dodging anyone. I’m used to fighting the boogeyman. I’ve fought the guys who are supposed to be monsters punchers. If done rightly you can take those big right hands and left hooks and contain them.”