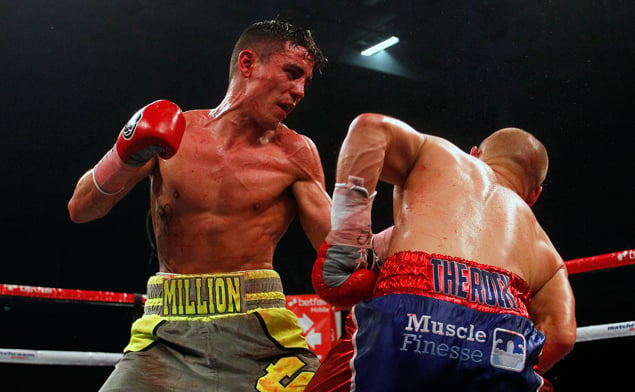 One wonders if Eddie Hearn matched Welshman Gavin “The Rock” Rees with Anthony “Million Dollar” Crolla because it was an attractive fight, or if he just couldn’t resist naming this main event at Bolton Arena in Bolton, England, “Rock n Croll.”

Still, marketing aside, the bout was high quality and Crolla, from Manchester, prevailed by scores of 115-113, 116-113 and 115-115 to secure a majority decision over the former WBA junior welterweight titleholder in a blood splashed battle.

Crolla (26-4-1, 9 knockouts) weighed in bang on the lightweight limit at 135 pounds with his opponent a pound under.

Rees, a big favorite coming in, was far more ambitious and put meat behind his punches in round one but it was clear Crolla was just having a look. In the second, the Englishman found his rhythm and scored well with a snappy left hand to set up clean and effective work at distance.

Crolla continued to box well in the third and was impressive on the back foot as jabs, right hands, left hook and uppercuts countered the reckless assaults coming his way. Both men suffered lacerations from a head clash in the fourth but Crolla remained superior with fists.

Rees still looked uncomfortable in the fifth and was being picked off continuously.  As a result the Welshman reverted to boxing at the midway point and the switch in tactics seemed to have an adverse effect on Crolla’s timing as Rees closed the gap. 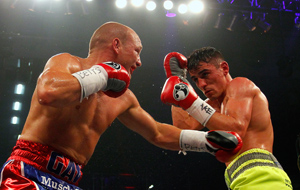 Still, the Manchester man got back to popping Rees with the left in the eighth and was more consistent with his work rate and poise. Rees moved laterally and attacked in bursts but found nothing significant as his frustration mounted.

Crolla was scoring well when a cut opened up to the side of Rees’ right eye following yet another head clash in round nine. The Welsh warrior, showing real bravery, attacked with a flurry of hooks but was turned into a corner and countered heavily again.

In terms of body language Rees looked like he wanted be somewhere else at times, whereas Crolla retained his shape and found the target. The former world champion resorted to buying time and showboating in the eleventh and Crolla simply stuck to tactics and built upon his lead.

The final round was all Crolla and a brilliantly timed right hand was followed by a punishing body assault, a strategy which Manchester based trainer, Joe Gallagher, called for throughout the contest.

This reporter felt the fight should have been scored slightly wider in favor of Crolla and the “majority” decision did him a slight disservice after a fantastic performance which few experts had predicted.

Crolla, a former British champion, has had a roller coaster career which includes some heart breaking losses on his resume but he is undoubtedly talented.  The Gallagher Gym in Manchester is one of the most successful in the UK and Joe pushes his fighters to the limit.

Rees (37-3-1, 18 knockouts) was essentially making a comeback after being violently battered to a fifth round defeat by flashy three time US titlist, Adrien Broner.  Super motivated, he trained diligently under the tutelage of Gary Lockett, but could not take advantage of his vast edge in experience.

Rumors abound that the winner of this fight would invariably challenge Ricky Burns down the road for the WBO lightweight title. Does Crolla deserve such an opportunity?  Not from where this reporter is standing but the allure of a big domestic collision on British soil will appeal to the masses in the UK.

On the undercard, Scott Quigg, from Bury, looked sensational in registering a third round stoppage of William Prado in a super bantamweight bout.

Quigg, another Gallagher fighter, came out slowly in the first to measure distance but by the end of the session the left jab was finding the Brazilian ominously.

The Bolton man started faster in the second and his rapier single shots set up a quick combination to the head. Quigg’s variety was first class and a sharp right hand following a flurry sent Prado down towards the end of the session.

He was up quickly with blood streaming from his nose and a look of harsh reality in his eyes.

The third was more of the same and a bursting left hook to the body hurt Prado badly. It was punch perfect from Quigg who repeated the dose before ending matters with a crunching right hook to the head.

Quigg had been inactive since impressively dispatching former world title challenger, Rendall Munroe, in November of last year. That was a career best performance but difficulty securing dates led to Quigg abandoning Hatton Promotions in favor of Matchroom.

Prado had never been stopped and Quigg looked pure world class.  He is in line for a shot at WBA champion, Yoandris Salinas.