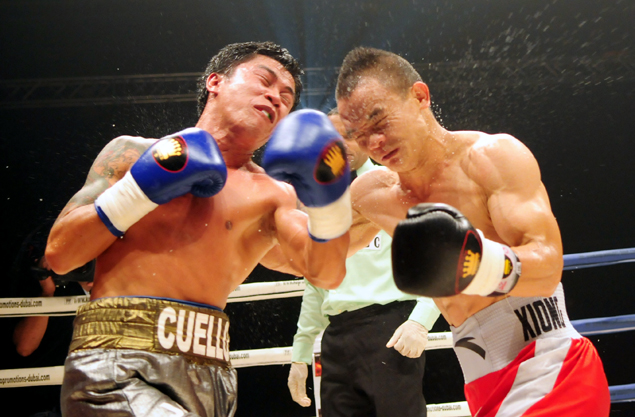 Zhaozhong Xiong defeated Denver Cuello via majority decision to retain the WBC strawweight title at World Trade Centre in Dubai. The scores were 113-110 and 115-112 for Xiong, while the third had it even 113-113.

More than merely retaining the title, Xiong legitimized his status as a world titleholder, the first in Chinese history. Xiong (21-4-1, 11 knockouts) of Kunming, China, had been derided for being the beneficiary of the WBC’s eagerness to crown a titleholder in the emerging world super power, bypassing the division’s mandatory challenger Cuello to face journeyman Javier Martinez Resendiz last November for the vacated belt Kazuto Ioka left behind when he moved up to 108 pounds.

Cuello (33-5-6, 21 KOs) of Iloilo City, Philippines, had been the mandatory challenger for over a year after knocking out Ganigan Lopez in two rounds last May, and entered Friday night’s fight as THE RING’s no.1-ranked contender at 105 pounds.

Still, a lingering injury to his right rotator cuff sustained in his fight with Takashi Kunishige in April remained unhealed, hampering him through an abbreviated training camp and the fight. Chino Trinidad of GMA News reports that Cuello is due to have surgery on the shoulder next week.

Cuello was able to score a knockdown in the first round but found it increasingly difficult to vary his attack using just his southpaw left. Xiong, 30, was able to regroup and evade Cuello’s singular attack and build up points. By the eighth round, Cuello began to favor the right shoulder to the point that the ring doctor stepped in to evaluate it.

Xiong lost a point in the ninth for a headbutt that left Cuello with a bad cut, but the busier Xiong was able to overcome the deduction by outworking Cuello.

The loss is just Cuello’s second in his last 30 fights, but at 26 years of age and with 44 fights behind him, the mountain road back to a title shot looks steep and littered with falling rock.