THE RING Magazine August issue: At a glance 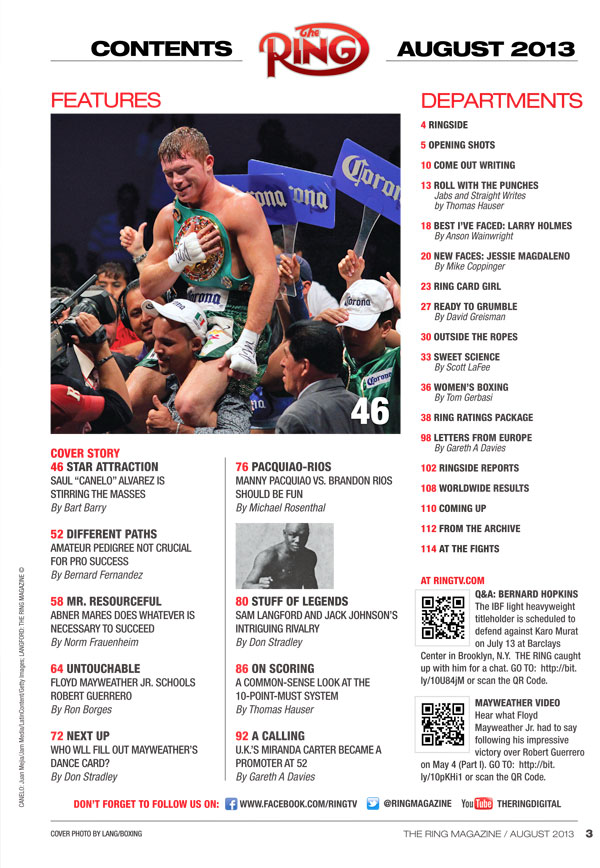 A few short years ago, THE RING junior middleweight champ was a prospect with many of the qualities you look for in a marketable fighter. Today, after drawing nearly 40,000 fans to the Alamodome for his fight against Austin Trout, the red-headed Mexican is a blossoming star.

The decision to put him on the cover came before the announcement that he would face pound-for-pound king Floyd Mayweather Jr. on Sept. 14. The excitement surrounding that event underscores his popularity.

Regular contributor Bart Barry takes a look at the phenomenon in his story titled Red Dawn. Don Chargin, a Hall of Famer who has played many roles in boxing for more than a half century, gives you a hint as to how Alvarez ended up where he is. 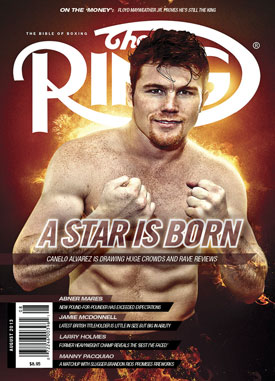 “I’ve seen it with some fighters,” Chargin said, “but never like it is with Canelo. I think you go back to that ‘it.'”

As part of the cover package, Bernard Fernandez writes in Different Paths to Riches that it doesn’t necessarily take an extensive amateur background to succeed in the pro ranks. Alvarez, who had few amateur fights, is proof of that.

Also in the August issue, Norm Frauenheim writes in No Limits that featherweight titleholder Abner Mares – hardened by adversity and experience — has exceeded the expectations many had for him.

In Grand Illusionist, Ron Borges looks back on Mayweather’s dominating victory over Robert Guerrero in May. Mayweather, with his father back in his corner, was the defensive wizard of old but some fans were left unfulfilled.

In The Mayweather Lottery, Don Stradley explores possible future opponents for Mayweather. Can you guess who they are?

THE RING Editor Michael Rosenthal writes in ‘One Helluva Fight’ that the battle between icon Manny Pacquiao and slugger Brandon Rios on Nov. 23 isn’t the biggest matchup in the world but it certainly will be a lot of fun to watch.

In The Stuff of Legend, Stradley tries to sort out the intriguing rivalry between monumental boxing figures Sam Langford and Jack Johnson.

Thomas Hauser writes in Common-sense Scoring that judges should deviate from common practice – which calls for 10-9 rounds even when neither fighter stands out – by scoring close rounds even.

In For the Love of Boxing, British correspondent Gareth A Davies introduces us to Miranda Carter, a civil servant who decided one day that she wanted to be a boxing promoter and then became one.