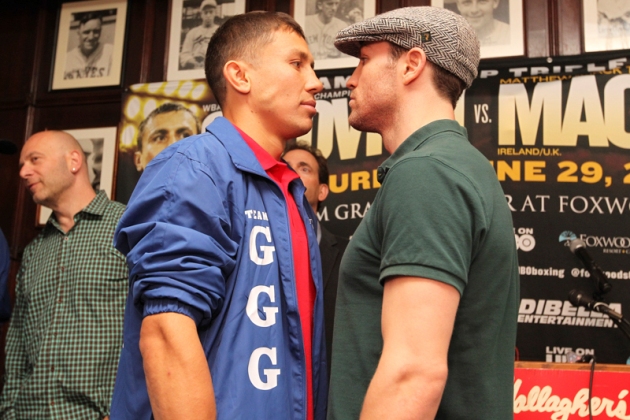 Hopkins came up with an upset 12th-round stoppage that unified the middleweight division for the first time since 1987 against Trinidad, whose record before that night was 40 fights — 40 wins, 33 knockouts.

“This fight reminds me a lot of the Trinidad-Bernard Hopkins fight when you had the knockout specialist in Trinidad who was an undefeated guy with a lot of power,” said Macklin (29-4, 20 knockouts), who will meet Golovkin (26-0, 23 KOs) in an HBO-televised matchup in Mashantucket, Conn.

“Felix Trinidad fought Bernard Hopkins, who had a couple of losses. But Bernard Hopkins had learned a lot from those losses and came back a seasoned, hard professional. During that fight, he out-fought, out-maneuvered and out-hustled and out-punched an eventually knocked out the supposed knockout specialist in Felix Trinidad, and that’s exactly what’s going to happen on June 29.”

In a battle of 31-year-olds, Golovkin will pursue his 14th straight stoppage victory against Macklin, having won his past two bouts bloody seventh-round stoppage of Gabriel Rosado in January and third-round knockout of Nobuhiro Ishida, who was stopped for the first time in his career in March.

During Wednesday’s final press conference promoting their fight, Golovkin praised Macklin, who was last in the ring for September’s first-round stoppage of ex-titleholder Joachim Alcine that helped him to rebound from consecutive setbacks against RING champion Sergio Martinez and Felix Sturm.

“We are very close right now to the fight night and I am very excited. I think this is a great fight for us,” said Golovkin. “I am the champion, and Matthew is the best challenger out there for me. This fight will prove who is truly the best in the middleweight division.”

RingTV.com sought the opinions of 19 boxing insiders as to their thoughts on what will transpire in Golovkin-Macklin.

Even when badly hurt, I expect Macklin return fire and let Golovkin know that he’s in a fight. Golovkin will likely receive his share of cuts and bruises, but ultimately, I think the undefeated titleholder will connect with a punch that ends the bout in dynamic fashion.

Although tough, Macklin has a style that will allow Golovkin to maintain momentum in his emerging stardom with another stoppage in an impressive streak, now at 13 and counting. Macklin knows only one way. At some point, the Irishman will decide to brawl. When he does, it’s over against Golovkin’s precise punches and power.

Fans aren’t giving “Mack The Knife” much of a chance to slice and dice his way through the power-punching phenom they call GGG. That’s actually very interesting when you consider that Macklin is the best fighter Golovkin will have faced to date, and that he represents a significant step up in competition for the heir apparent world middleweight champion from Kazakhstan.

One thing we can all be sure of is that this match-up promises to be a war for as long as it lasts, a proper scrap between two fearless warriors. In the ring, Macklin’s incredible fighting spirit will test Golovkin in ways he’s not yet been tested but in the end, GGG will pass with flying colors. Literally. Some time late in the fight (let’s say the 9th round) a bloody white towel will fly into the ring from the blue corner to save a defenseless Macklin from GolovkinÔÇöand from himself. The beaten challenger won’t be happy with trainer Buddy McGirt, but he’ll probably thank him some day.

Gennady Golovkin TKO 7 Matthew Macklin: I am a big believer in Matthew Macklin’s talent but I think he comes up short in this one. For me, the Manchester star should have been champion in June 2011 when he threw the kitchen sink at Felix Sturm but it was not to be.

He also competed well with Sergio Martinez but was found wanting in the championship rounds when the pound for pounder upped the pace. My issue is that Macklin is going from big fight to big fight without necessarily getting any better.

This will be his third world title fight in four outings and one could argue that this is likely to be his toughest. Gennady Golovkin, like the challenger, sets a torrid pace but he is a home run hitter so Macklin cannot afford to mix it.

The question is can the British hope box smart and drain Golovkin’s vaunted aggression over a period of time? My guess is no and I see Golovkin landing enough over the first half of the fight to force a submission.

He’ll keep their fight competitive for a reasonable amount of time, but Golovkin has shown a granite chin and Macklin won’t be able to keep Golovkin off him before eventually succumbing to Golovkin’s power.

However, I think the irresistible pressure of Golovkin will win more and more of the exchanges as the bout progresses, and the champ will retain his belt after a fan-friendly war of attrition.

Gennady Golovkin TKO 9  Matthew Macklin: This is going to be a good, tough, exciting, fan-friendly fight. I think they’ll both be throwing bombs and their will be plenty of rock-hard shots landed by each man.

That said, I think Gennady Golovkin is the man. Frankly, this guy is a one-man wrecking crew. I understand clearly that he has not been in with great fighters yet, but that doesn’t mean he can’t beat one.

Matthew Macklin is not great, but he definitely is good. Problem is, Mathew is just good enough to not quite get there against the best competition. Felix Sturm cannot crack like Golovkin.

By the midway point of the fight, he is going to start to deteriorate. By the 8th or 9th round he’ll be taking too many shots, and either the ref or his corner will stop the fight.

Gennady Golovkin KO 9 Matthew Macklin: Go ahead, make my day. This is a slam dunk pick to get back to even on my count. Matthew Macklin is a gamer all the way, but he is up against it in this one.

He’ll be right there, despite his head movements. Gennady Golovkin will eventually time his shots and take him apart. Golovkin in nine.