Danger is omnipresent for female fighters, too

There was an eerie silence that fell over the crowd at the Congress Centre at the Radisson Blue Waterfront Hotel in Stockholm, Sweden on Friday evening, belying the intense action that had just commenced.

Perhaps the dimmed lights over ringside were meant to obscure what was a lack of a paying audience, or perhaps local customs do not allow for the type of raucous cheering that is a staple of American sporting events. 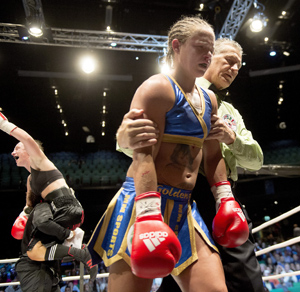 Or perhaps the silence was a stunned silence, the result of a hometown crowd not knowing how to respond to witnessing their champion Frida Wallberg sustain her first career loss via an eighth-round knockout. Not even the officials or medical staff, who allowed her to stand up immediately after being stopped without a count, nor her trainer, who didn’t immediately have a stool ready, seemed to know how to respond.

Ironically, it was boxing legend Lucia Rijker, working as the trainer of Wallberg’s opponent Diana Prazak, who first had the inkling that something was amiss. As Wallberg began to slump along the ropes that propped her up, Rijker tended to her, imploring Wallberg’s own trainer to bring in the stool and give her ice, before shouting the ominous exhortation: “Get a doctor!”

The initial news reports were grim: a possible cerebral hemorrhage, with the statuesque former WBC 130-pound titleholder being placed in a medically-induced coma to alleviate brain swelling.

There tends to be a chauvinistic view among boxing’s die-hard niche fan base that minimizes female boxing. The overlap of fans who watch the higher-profile men’s fights on HBO and Showtime, while seeking out the harder-to-find international feeds of the women fights, is minimal at best. While Christy Martin and Rijker made strides to legitimize the sport during the 1990s, it simultaneously took backward steps with the sideshow promotion of Mia St. John.

The spotlight may be dimmer, but the danger is all the same.

“I think it doesn’t matter if it’s male or female; everybody that steps through those ropes takes that risk,” said Rita Figueroa, a retired female boxer.

Figueroa knows the risk all too well. After making it back to her dressing room following a six-round decision loss in 2009, Figueroa began experiencing headaches and nausea. She was unable to sign her check. Figueroa was rushed to a Chicago hospital where emergency brain surgery was prepared to repair a broken blood vessel. Had she arrived a few minutes later, she might not be alive to tell her story.

But she is here, still a part of sport training fighters alongside her former trainer Sam Colonna at the Chicago Boxing Club. In many ways, she is a walking miracle. The only external reminder of her incident remains a scar that runs down the middle of her scalp like a mohawk.

“Boxing didn’t do this to me, I did this to myself,” said Figueroa. “If I knew now that I was going to go through the injury and that things were going to be the way they were, I would probably still do it only because I’ve been very fortunate. I’ve met a lot of great people and I’ve had a lot of great opportunities. I’ve been very blessed with it.

“It must seem kinda crazy for me to say that. It takes a different breed of people to be a boxer because most people see a punch coming and they want to run.”

Figueroa, who saw the Wallberg fight online, was appalled at the lack of preparedness that seemed to follow the knockout.

“I was watching the last round of this fight with Frida and they didn’t even get her a stool for at least thirty seconds,” said Figueroa. “Some doctors need to be made more aware of the signs of brain injury. Look at the pupils, are they dilated? There are different things that can be looked at to tell if there’s more of a problem.”

One can only hope that Wallberg, 30, can make the kind of recovery that Figueroa has. There are encouraging signs for Wallberg, whose days as a fighter are almost certainly finished with a final record of 11-1 (2 knockouts).

In a message on her Facebook account written in Swedish and translated to English by veteran journalist Per Ake Persson, Wallberg sought to allay fears of the worst. “I┬┤m awake now and don┬┤t want anyone to worry. I am tired after all the medication. I felt I had the fight but my legs got heavy after the fifth and I was caught by a swing in the eighth.”

The message is signed, “Hug from a tired Frida Wallberg.”

As Wallberg continues to recover, the sport of female boxing will undoubtedly come under the same kind of fire from abolitionists who think women should remain in the kitchen and stay out of the ring. Yet, just like their male counterparts who fight for bigger paychecks, the females put in the miles on the road, sacrifice in the gym and in their personal lives. And they assume the same risks, knowing that they may walk up those steps to the ring only to be carried out.

Just like their male counterparts, they are warriors to their core.