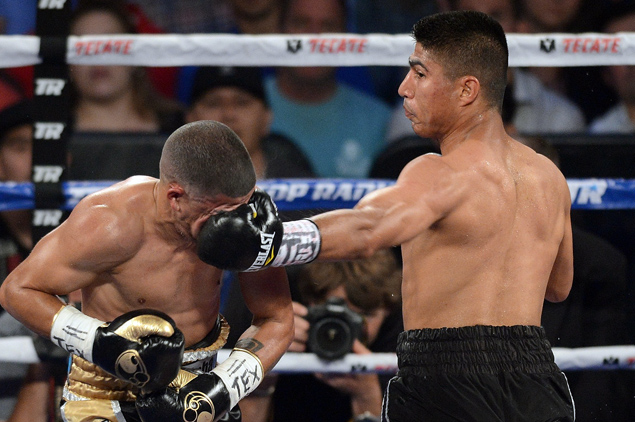 DALLAS – After assuring his public he was a better prizefighter in every way than Juan Manuel “Juanma” Lopez, Monday through Thursday, and after an unpardonable indiscretion on the scale Friday, Oxnard, Calif.’s Miguel Angel “Mikey” Garcia redeemed himself as best he was able Saturday night.  He proved himself the better prizefighter than Lopez in every way, just as promised.

Garcia (32-0, 27 KOs), who lost his WBO featherweight title at a Friday weigh-in that found him two pounds over the featherweight limit – an overage Garcia did not try to remedy in the time he was allotted after missing weight, citing a state of dehydration that made his fingers ache and eyes too dry to blink comfortably – unmanned Puerto Rico’s Lopez (33-3, 30 KOs) Saturday, stopping him at 1:35 of the fourth round at American Airlines Center.

“I just used the right hand,” Garcia said afterwards.  “I just used it to get him out of there.”

Both fighters looked ready and threw meaningful punches in the opening round, with the power hands predominate – as they tend to be whenever an orthodox fighter like Garcia makes a match with a southpaw like Lopez.  Despite Lopez’s best effort, though, Garcia had the better footwork, quicker jab, more accurate counters, and better chin.  That provided Lopez few recourses.

“I knew Mikey would box him,” said former lightweight titleholder and Garcia camp member Brandon Rios.  “He waited till ‘Juanma’ came forward to do his damage.  Excellent work.” 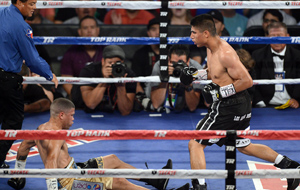 After clipping Lopez with a left-hook counter that wobbled the Puerto Rican in second round, Garcia lifted Lopez’s chin with a sharp jab, then endeavored to shove it through his throat with a precise right cross.  Lopez dropped straight backwards on his trunks, rose, and got through the round, thanks, in part, to Garcia’s cautious poise.

In the fourth round, Garcia once more stunned Lopez with a right cross.  As the Puerto Rican fluttered backwards to the ropes, Garcia turned over a left hook that dropped Lopez flat.  Game to the end, the former champion rose before referee Rafael Ramos’ 10-count was complete, then tried to step forward and show he was ready to resume.  Ramos, though, mercifully, and properly, waved an end to the match.

How much Garcia’s miss of the featherweight limit on Friday will affect insiders’ views of him remains unclear.  Whether Garcia’s overweight showing was a one-time lapse in discipline, evidence of his body grown out of the featherweight division, or a harbinger of unprofessional acts to come, is a question Garcia, and Garcia alone, will answer with time.

Saturday’s co-main event brought a statement from undefeated Nebraska lightweight Terence Crawford as welcome as it was unexpected.  Eschewing a safety-first approach, allowing himself to be hit by an opponent slower and less accurate than him, Crawford willingly, if uncharacteristically, accepted a punch to give one.  And give one he certainly did – dropping Mexican Alejandro Sanabria and rendering him unfit to continue with a single hook in the opening moment of the sixth round.

At the time of his stoppage victory, Crawford (21-0, 16 KOs) led Sanabria (34-2-1, 25 KOs) by prohibitive margins on all three official scorecards. THE RING card concurred, marking all rounds in the Nebraskan’s favor. 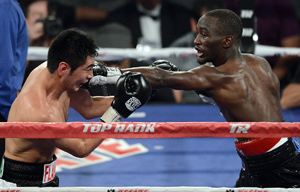 “He kept blocking my jab,” Crawford explained after his knockout victory.  “So I faked the jab and threw a short hook.  I felt the power go up my arm.”

After an uneventful opening round, Crawford began to lash Sanabria with right hand counters, taking from the Mexican’s attack any impetus to lead combinations with his jab.  In rounds three and four, Crawford began to throw more aggressively and absorb occasional counters from Sanabria in return.  The fifth round saw Crawford leap at Sanabria with an innovative right hook to the body, right cross to the head combination, one that caused the Mexican to reconsider his defensive strategy altogether.

That adjustment by Sanabria mattered little.  The sixth round opened with Crawford winging a left-hook lead that caught Sanabria square on the chin and dropped the Mexican, who rose before the completion of referee Laurence Cole’s 10-count.  One look from Cole, though, assured him Sanabria was in no condition to continue combat, stumbling leftwards as he was, and the match was waved-off at 0:17 of the sixth round.

Crawford’s decisively violent victory, and the chances he took in its pursuit, assured those gathered ringside the Nebraskan will be a contender to watch in the lightweight division.