Frampton and McGuigan look to the future 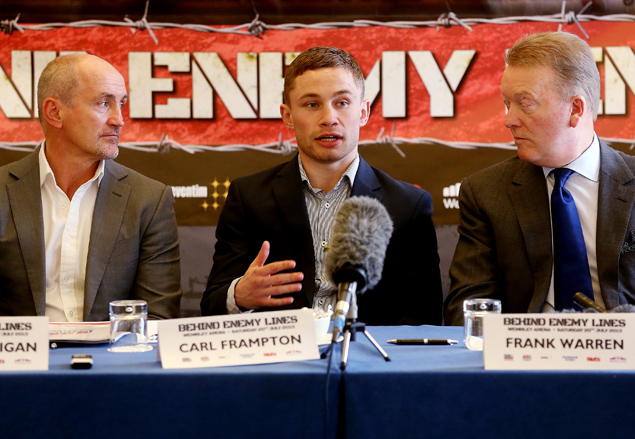 Carl Frampton (center) with manager Barry McGuigan (left) and his new promoter Frank Warren during a press conference on May 30, 2013 in London, England, announcing their four-fight deal.

Nothing changes for Carl “The Jackal” Frampton. The main objective remains the same, to win a world title in Belfast. The journey though has taken a little detour. And as one working relationship has ended, another one has begun.

At the end of last month, British boxing had its head swivelled when the Northern Irishman and his association with Eddie Hearn’s Matchroom Boxing came to an end. Despite some interest from America, Frampton and his manager Barry McGuigan decided to team up with Matchroom’s domestic rival Frank Warren and boxing channel Boxnation.

The four-fight deal for the 26 year old, which begins with an outing on July 20 at London’s Wembley Arena followed by three fights in his beloved Belfast, was an easy one to say yes to. Financially, the gain is greater too. The money received from his next bout as opposed to what he would have received to fighting on a Matchroom show in Hull, also in July, were “night and day” as Frampton described it.

“We weren’t a priority,” Frampton explained to RingTV.com.

That P-word has become the pivotal reason, it would seem, for the switch. Frampton said that the decision had been brewing for a long time. 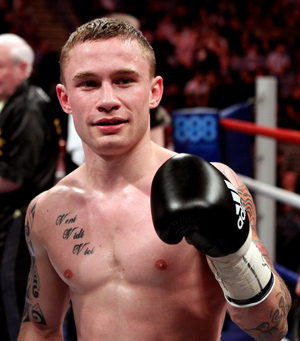 “We want to be a priority and that’s what will happen on Boxnation. I’m ranked (No. 3) with THE RING (at junior featherweight), for example, and I just wasn’t getting the exposure that the other Matchroom guys were getting,” he said. “I wasn’t one of the guys that was getting plugged on [Sky Television’s] Ringside every week. I was one of the better fighters in their stable.

“For a few months after the Kiko Martinez fight [in February] things went downhill. We were put on the backburner. We’d contact Matchroom and be told they’ll get back to me in 48 hours and then that would turn into three weeks. I’m not the youngest guy in the world, you know. I need to get moving with my career. We had interest from some U.S companies too and maybe that’s something we can look at in the future. I know a lot of people are concerned about me and this deal but they needn’t be. It’s a very good deal and people don’t need to worry. I’ve got a massive following behind me; it’s deeper than what people think. There’s a lot of good people behind me. I’m in very safe hands.”

McGuigan insisted that there is no bad blood between Team Frampton and Matchroom. Both have gone their separate ways, the focus now is on the long term plan for the European super bantamweight champion.

“We’re in our own boat but we’re sailing our own ship,” said a satisfied McGuigan.

“There’s a lot of boxing fans in Belfast and they’ve been starved of big shows. Eddie Hearn was telling us that it wasn’t cost effective for us to go there. It’s time for us to stand up and be counted for.”

With Carl’s future now taken care of for the next 12 months at least, thoughts can be turned to what the aptly named ‘Brick Fists’ does best. The 122-pound division is one that is glowing with talent, emerging stars and a Cuban that was once the idol of a 14-year-old Frampton.

At the 2001 World Amateur Championships in Belfast, a much younger ‘Jackal’ sat in awe as Guillermo Rigondeaux strutted his stuff in the youngster’s home city en route to a bantamweight gold medal.

Fast forward 12 years and ‘El Chacal’ [yep that’s right, it also means ‘The Jackal’] now sits as top dog at junior featherweight. His taking apart of the seemingly unstoppable Nonito Donaire was his showcase to the world. The problem now is where does he go from here? A fight with Vic Darchinyan might be in the cards, which seems a case of one step forward and two back.

Frampton says that his former hero will struggle to find opponents willing to take him on.

“What does Rigondeaux do with his career now?” asked Frampton.

“People don’t want to fight him now. They’ve seen what he can do. He beat Donaire and now he’s one of the best in the world and he can do what he wants. If he decided to put his foot on the gas in his fights he could put people away. Fair play to Darchinyan if he takes that fight but I can only see that being a one-sided beatdown.”

The subject of a showdown between himself and the Irish-managed Cuban is already out there in the public domain but realistically Frampton knows he’s not ready for him yet.

“I know I’m not ready but give me a couple more fights and a bit more experience and I’ll be ready for him. He’s had less pro fights than me but he’s got a wealth of experience,” he admitted. 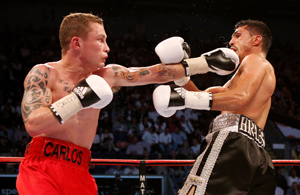 At time of writing, Frampton had a ranking of three with the IBF and six with the WBC. The current champions from each governing body are Jonathan Romero and Victor Terrazas respectively. Romero could be soon facing Jeffrey Mathabula whilst Terrazas could be facing the growingly popular Leo Santa Cruz on the Floyd Mayweather-Saul Alvarez undercard. Frampton doesn’t care who of the three mentioned he would have to face but perhaps surprisingly, both he and McGuigan would welcome a clash with Cruz.

“I think Leo Santa Cruz is made for me, he has his hands high and throws a lot of punches,” Frampton commented.

“He wears you down. He’s like a mini version of Antonio Margarito. Golden Boy Promotions have said they’d love to work with us at some point down the line. There are some exciting fights ahead. We’ve got a good set-up and good people behind us and there’s no concern about paying whatever amount it takes to bring these guys over here.”

And with Frampton’s fan base, particularly back in Northern Ireland, growing with each fight. There becomes the increasing possibility that a world title fight may have to take place outdoors. Frampton’s backyard is the Odyssey Arena. A venue that can seat around 11,000 but as was proved against Martinez can sound like there are three times as many inside. His fights sell-out quicker each time and his weigh-ins are equally as mobbed and frenetic.

“The whole build-up to the Martinez fight was amazing, the weigh-in was incredible,” Frampton recalled.

“In Belfast three, four days before the fight I was walking down the street and there was people shaking my hands and beeping their horns. It’s a real boxing city. They’ve been crying out for a guy who realistically can be a world champion. There’s been guys in the past but they’ve really latched on to me. Belfast is one of the biggest fight cities out there and when I fight in front of them it gives me that extra five to 10 per cent. I know now it’s just gonna get bigger and better.”

Shaun Brown is a contributing writer to the magazine Boxing Monthlyas well as the Sky Sports boxing website and Livefight. Follow him on Twitter @shaun_brown. He can be contacted at [email protected]