Dawson should dominate Stevenson, but will he? 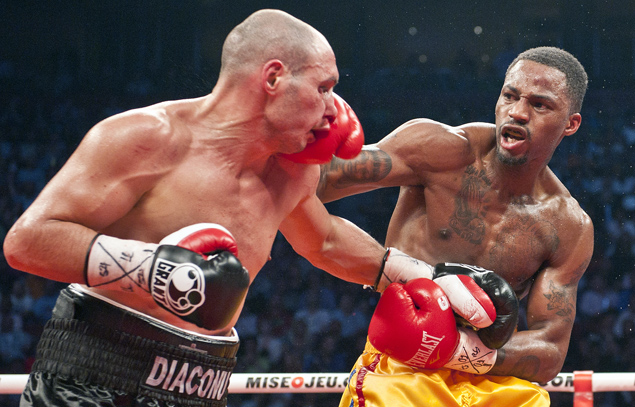 Chad Dawson (right) outpointed Adrian Diaconu (left) the last time he fought in Montreal, but on Saturday he ventures to the Quebec province in a must-win (impressively) situation. Photo / AFP

There was a time when Chad Dawson was considered the worthy heir apparent to the light heavyweight throne – the fitting replacement for Roy Jones, Jr., a former Pound-for-Pound best who ruled the division for more than a decade. Dawson burnished his image with impressive victories over Tomasz Adamek, and two wins each against Glen Johnson and Antonio Tarver.

Even so there was always something amiss about Dawson. For every match like Adamek, Johnson and Tarver where Dawson fought with energy and verve, there were lackluster performances with a lack of passion and zest. You never knew which Dawson would show up. And it didn’t help that he had a revolving door at the gym where trainers came and went like shoppers at a department store.

Some of Dawson’s promise evaporated when he lost the first match of his career – an 11th round technical decision to Jean Pascal at the Bell Centre in Montreal in 2010. It wasn’t the hostile territory of fighting in Pascal’s home country that did in Dawson. It was his lack of effort. He showed that he could indeed perform in Canada when he returned to Montreal and defeated Adrian Diaconu by decision the next year.

After two uneven performances against Bernard Hopkins – a no contest and a majority decision victory – and a disastrous loss to Andre Ward at 168 pounds, Dawson is returning to Montreal to defend his WBC and RING titles and reclaim his grasp on the 175-pound division. Standing in his way is Adonis Stevenson, a Haitian who makes his home in Longueuil, Quebec and whose resume looks like a list from the Witness Protection Program.

Dawson had planned on fighting a rematch with Pascal. But Pascal’s promoter decided he could make more money by doing an all-Canada match between Pascal and Lucian Bute. So Dawson was offered Stevenson instead. 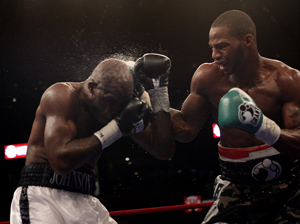 Gary Shaw, Dawson’s promoter, acknowledged that Stevenson is a good puncher, but said Stevenson isn’t nearly as skilled a boxer as Dawson.

“He’s a slow fighter. No one on his resume is as good as Chad,” Shaw said.

That means Dawson should dominate. But that would be a leap no one who has ever seen Dawson fight would ever want to make.

Dawson knows all about the up and down performances. He was in the ring for them.

“Every fighter goes into a fight looking for motivation,” Dawson said. “My motivation has always been the confidence that I did everything right in preparing for the fight. Those fights where I didn’t fight with any passion and had a bad performance was because I had doubts about myself. In those fights where I was passionate and dominant I knew that I was the best I could have been. I had no doubts.”

Dawson said he has no doubts heading into the match against Stevenson. 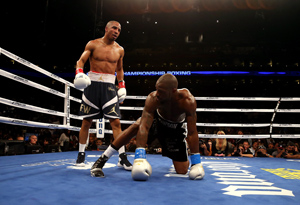 That would be a marked improvement over the Chad Dawson that lost to Ward. Dawson went down to 168 pounds, chasing a big fight. Instead he ran into a buzzsaw. Ward dropped him in the third, fourth and 10throunds before Dawson succumbed to the pounding and lost on a 10thround TKO.

“It was a gamble (dropping in weight to fight Ward) and I lost,” Dawson said. “It’s water under the bridge. I’m moving on.”

Dawson put trainer John Scully in that category too, firing him (for the second time) and hiring Eddie Mustafa Muhammad (for a second time).

“I can’t put my finger on the reason I left Eddie the first time,” Dawson said. “I was young and I wanted to try something different. So I went with Emanuel Steward, but that wasn’t a good fit. Then I hired John. It didn’t work out. Now I’m back with Eddie. He got me to where I am today.”

Whether all the trainer changes have stunted his growth as a boxer is debatable.

But it certainly has affected him in the ring.

“I went through a spell where I was trying to find myself and find out what my style was,” Dawson said. “It hurt me in what I was doing in the ring. But Eddie was there from the beginning. He lets me be me and gets me to do what I do best.”

Before a public workout, Shaw noticed that Dawson’s mental state was calm when the two had breakfast on Tuesday morning.

Dawson ran into someone who knew him from his past visits to Montreal at the airport on Monday and the guy offered him a ride to the hotel where he is staying for the fight week.

“We had called a car service, but this guy comes up and starts to talk to Chad and offer to take him to his hotel,” Shaw said. “Chad didn’t even wait for the car service. He is fairly well known here. I think he feels more comfortable here than anywhere else in the United States.”

Dawson knows he can’t afford to have another lackluster performance. He needs his title and he needs to remain viable as a TV commodity.

“I want to go up in the division, keep my title, be known as the best in the division and clean out the light heavyweight division,” Dawson said. “There’s no room to go down.”