Ward: Froch ‘not at the top of my list’ 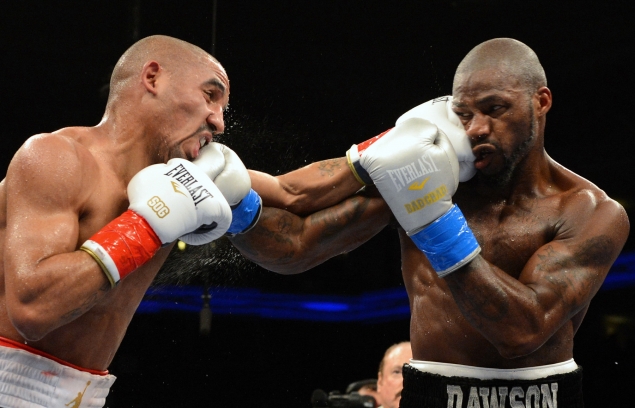 RING super middleweight champion Andre Ward said the magazine’s No. 1-rated 168 pounder Carl Froch is not “at the top” of his list of opponents despite the British standout’s recent unanimous decision over Mikkel Kessler in a rematch of their 2010 bout when Kessler unanimously decisioned Froch as part of Showtime’s Super Six World Boxing Classic.

But while working for HBO as a ringside analyst for Froch-Kessler II with Jim Lampley, Max Kellerman and unofficial scorer Harold Lederman, Ward initially said that a return bout with Froch would “make sense.”

“I’ve already beaten Froch, but right now, his team it out there campaigning. They’re politicking right now, and they’re trying to turn the tables and make it seem like ‘Ward needs us, and he has no options,’ but he’s in the same weight class, so he has about the same amount of options as I have,” said Ward, 29.

“And he brings up a third fight with Kessler. But if you look at the ratings they just had, it’s a poor rating, and that’s a nice way to say it. Nobody wants to see that fight again, so he has the same amount of options as I have. But if Froch is a fight that makes sense, it’s a fight that can get done and I’m not opposed to it.”

Froch, 35, had earned consecutive stoppage victories over Philadelphia’s Yusaf Mack in the third round and previously unbeaten IBF beltholder Lucian Bute in the fifth in May and November of 2012 prior to facing Kessler.

Ward fought through a broken left hand to defeat Froch and was later named Fighter of The Year for 2011 by THE RING and the Boxing Writers’ Association of America.

Froch, meanwhile, has said that he could win a rematch by knockout against Ward, who believes the opposite.

“I would look forward to a rematch from the standpoint of just silencing Froch and just really just taking it to another level,” said Ward.

Another consideration for Ward is a matchup with former WBC middleweight titleholder Julio Cesar Chavez Jr. (46-1-1, 32 KOs), who is set to return on Aug. 3.

“As far as the fight with Froch, I’ve said it and I’ve stated it and I’ll continue to state it, and that is that it’s not a fight that’s at the top of my list. I just think that [Chavez] is a fight that makes sense,” said Ward of Chavez, who was last in the ring for a unanimous decision loss to 160-pound champion Sergio Martinez, whom Chavez Jr. dropped in the 12th round, last September.

Ward is coming off September’s HBO-televised 10th-round knockout of RING and WBC light heavyweight champ Chad Dawson (31-2, 17 KOs), whose HBO-televised clash of southpaws with Adonis “Superman” Stevenson (20-1, 17 KOs) Ward will call from ringsside on Saturday from Briell Centre in Montreal.

“It’s an interesting matchup. Dawson still has a lot of questions to answer. Does he still have the fire. Can he still take a punch, and what does he have left after his fight with me. I don’t care how you slice it. When the situation happens like it happened in my fight with Dawson, where he loses the way that he lost, he has to rebuild his confidence. That’s going to be the main thing. A training camp isnt going to do that. The only way that he can get back together is by getting in there and taking the shots that he needs to take and performing the way that he needs to perform, ” said Ward.

“So he he’s got a lot to overcome. Stevenson is really in a win-win situation because he’s fighting in a heavier weight class, and he’s fighting a Chad Dawson who is coming off a major loss to me. He’s in his home country, and if he loses, people will say, ‘hey, he’s really not a light heavyweight, he’s a super middleweight.’ I’m sure that he wants to win, but there is a lot of pressure on chad Dawson. Adonis Stevenson just has to go out and win, while Chad has to not only win, but he has to be spectacular in doing it.”

Asked if Stevenson was a potential opponent should he defeat Dawson, Ward said, “everybody is a possibility at this point,” adding, “it just has to make sense.”

Meanwhile, Ward reasserted his plans to return in September, this, after confirming a date and an opponent with promoter Dan Goossen and manager James Prince.

“I just want to get past September and then see where we’re at. Right now, September is the month. They’re getting closer to finalizing a date and finalizing a venue. I just need to get one fight under my belt to knock off any ring rust, and then I feel like I would be ready for whoever. That’s what we’re focused on right now. We’re trying to lock that down. It’s day by day,” said Ward.

“I haven’t been given any favors as far as the level of competition that I’ve fought. I wouldn’t expect September to be any different. It’s going to be a top flight opponent, but it’s not going to be Chavez, and it’s not going to be Froch. But, after September, I think that it can be any one of those guys. I’m on the phone with my team every day, with Jay Prince, my manager, and he’s working overtime. So as soon as I get the info, we’ll pass it along.”